I ignored my alarm and slept in until 6. Did yoga, meditated and had breakfast. Spent some time online and reading and then my husband showed up for his breakfast.

The husband is rather stressed. All the fruit is ripening at the same time, we are all stressed with the pandemic and he feels like he is working way too much and everything is pulling on him. Since we have neglected many things around the house for quite some time he is not wrong in that there is lots to do but on the other hand most of this is our free choice and we do all those things because we like them. Like me he has a tendency to start too many projects at once and then feeling overwhelmed.

It also sometimes feels as if I should stop whatever I’m doing to run to his aid. Unfortunately this never works. Also, I could need some help as well. Things have been slightly crazy lately. On the other hand, again, they are always crazy in July. That is the month that feels like it should be off from work but that goes on and on, seemingly endless. It is also the month where everything in the garden ripens at the same time and where I have to make all the jam. And we’re all just hanging in there until summer break will finally start.

Setting too much hope on our time off can backfire, though. Last year I spent the whole six weeks unable to do anything and in the end I was happy when it was over. Not good.

Anyways, I got going pretty early because there was so much to do. I did the dishes and such, went to the health food store in search of canning sugar, didn’t find any, went to the other health food store and didn’t find any either. I did buy chocolate and potato chips, though. I decided to just mix the remnants of two different kinds of canning sugar in with what was already in the pot. I had no idea if that would work or if that would make things go wrong.

When I came back home the boy was finally up and having breakfast. I spontaneously decided to delegate the canning sugar issue and sent him off to the far-away supermarket in search of the particular kind of sugar that I had run out of.

Meanwhile I went running. By then it was windy and getting colder. It looked like it might rain. 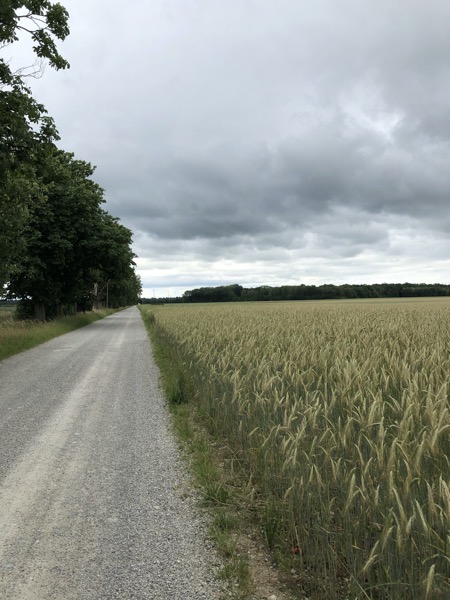 I loved it. I had feared that it would be too hot for running: 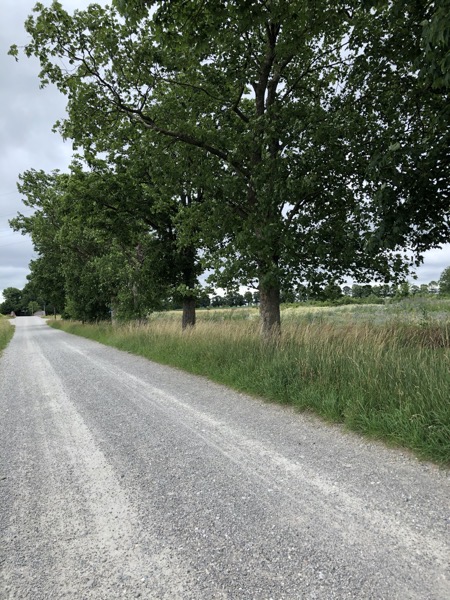 Up until the halfway mark I did pretty well with the 5 minutes of running/1 minute of walking intervals but then I started taking short walking breaks more often. About ten minutes before the end of my run I met my husband who was just getting started. We talked for a couple of minutes and then all my oomph was gone.

Went home, was glad that the boy had gotten the right kind of sugar and took a shower. I decided to move the jam-making to early evening because squeezing it in before lunchtime seemed a bit stressful. In our kitchen one can’t make jam and cook lunch at the same time.

My husband continued to be super-stressed and insisted on making lunch without help. That meant I could spend ten minutes on my novel and then fold all the dry laundry and hang up the load that my husband had started in the morning. He had insisted that he had enough time to hang it up and then went on to forget all about it. I mean, he would eventually have remembered, he always does, but I think it’s a good thing to hang the laundry up right away to prevent excessive wrinkles.

Lunch was good but accompanied by conversations about how stressful everything is: 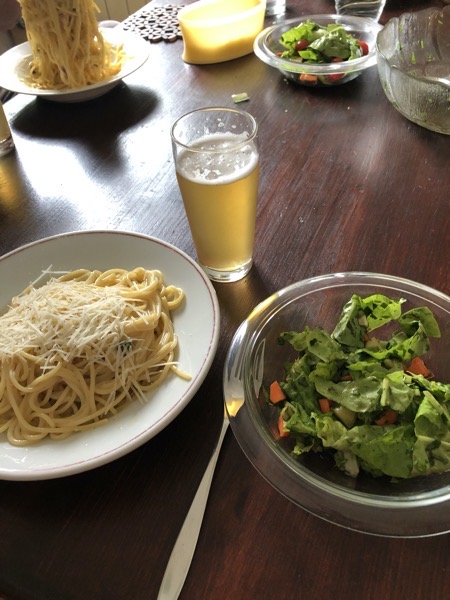 I keep thinking that our stress levels should be doable. There is no war going on, nobody is terminally ill, we have a nice home, plenty to eat, everything we need and work that we love. Yes, there is a lot going on but my husband and I are the kind of people who always have a lot going on. Looking at the facts we only work afternoons, have about three months in total per year where we work way less than that even and we have loads of time every day to spend as we see fit.

At the same time my husband insists that he has no energy left at all and feels so stressed that he can’t eat properly. He is raging against the unfairness of it all while I’m still thinking that there is no fairness in life and that we are incredibly privileged and lucky. I’d say that most people in the world have it worse than us. Yes, we are having an ant infestation but actually, it’s already much better now.

So, my first student cancelled (boo for lost income but yeah for regained time). By then I was so angry at everything that I did not do the dishes but instead ate half a bag of potato chips. Which, of course, is a totally rational way to deal with anger. Then I taught my students all set on getting the jam on the road as soon as possible.

So I decided to start this post first. And drink a beer. And then my bedtime rolled around but I still hadn’t made jam.

Yeah. See me be all rational and disciplined. Not.

I finally started washing the last set of dinner dishes at 9.45. Then made that jam even though I didn’t want to and then went to bed way too late. No surprise there.

So. Today there will be another trip to the health food store, this time for actual food. In the afternoon there will be all the teaching. It will go straight through from 2 to 6. Fun times. I actually don’t have any plans for tonight but go to bed as earl as I can. Without eating junk food, too much chocolate or drinking beer.

I just have to remember that I am in total control of my actions at all times.