Another day where the alarm went off at 5.30, I turned it off, rested my eyes a bit and got up after six. Which meant I did the whole morning routine except working on the novel. At least I have proven that doing yoga makes my back happier than not doing yoga. Especially when I do exercises for the lower back.

My husband has decided to eat breakfast earlier so he came over at eight. The boy on the other hand had a lazy sleep-in and showed half an hour later than usual. Husband was extra-stressed because now that it has stopped raining he needs to do all the garden things plus he needed to get beer and such plus the boy needed his help for a science project.

In the end a lot of things were accomplished. The boy’s project is under way, my husband got most of the things done and I was pretty productive as well. The usual housework got done including a big pile of dishes and pots, I went to the health food store, helped a little with cooking lunch and did some podcast prep.

We had rice and dal for lunch: 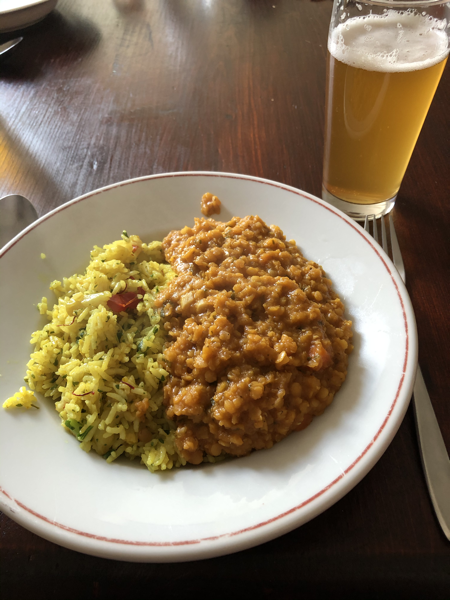 At one point I had hopes of recording the next podcast episode as well but then it turned out that my husband would start teaching early than I thought. I can’t record while he teaches because the sound carries over to the recording so that was that.

I taught a couple of students, most of them back in my studio for the first time in weeks. And afterwards two hours just slipped by. I ate dinner, I talked a bit with the boy, I kept my husband company while he ate dinner, I looked at Ravelry and Facebook, I got a knitting designer’s newsletter and immediately bought her new pattern and that was it for the day.

I waited until the boy was done with taking a shower, left the dishes as they were and got ready for bed.

Today there will be running and teaching. No idea what else.