I woke up early after not enough sleep. My back was better but still not back to normal. I did my 9 1/2 minutes of very slow, very easy yoga and meditated for five minutes but nothing else.

No work on the novel-in-progress happened. Again.

I had breakfast with the boy and spent my precious time between other people’s breakfast reading instead of writing. I can’t even say that it was a mistake because I enjoyed it so much.

My husband got up and was feeling low. I think it was the combination of bad weather and feeling stressed out because so much stuff is piling up, especially in the garden. Because of the weather, of course.

We got started pretty early, I did dishes, changed the sheets and cleaned some of the house. I never clean it all but I have a list of things I do quickly just so things don’t fall apart. For once I used this time as thinking time properly and it was glorious. It did mean stopping what I was doing now and again and jotting something down in my notebook but it made my head feel so much clearer. I got a ton of ideas. From cleaning I went right to folding laundry. My husband came back from his run while I was starting to vacuum everything. He started preparing for cooking right away. Because of the ugly weather he decided to cook on the wood stove which meant that lunch was somewhat late. Of course. And that meant that nobody did the dishes. We had an old stand-bye: 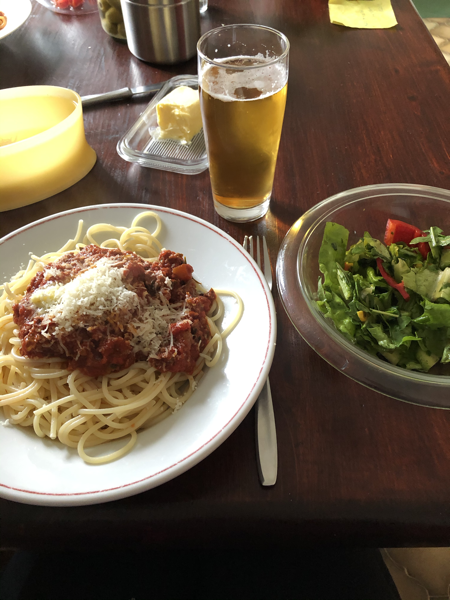 I only had a short break after lunch before teaching. I was alternating between video and in person lessons again and in the one break I had between students I wrote a ton of emails and made some phone calls. All admin for the teaching. My new studio setup means I can’t really do anything on the computer there. I had to extract the laptop, carry it to the kitchen and write my emails there. My computer desk is in the designated student zone of the studio, my other desk is piled high with everything that usually lives near the piano and on the shelf next to the piano and my laptop sits on said shelf behind the keyboard and music stand. Still. It works and I’ll get used to it. But all my nice ergonomics are gone. I don’t like that.

The boy was nice enough to hang up the load of laundry my husband had started. In there were our running shoes. Since we’d like those to be not only clean but also dry for today’s run it was imperative to get that done in time.

After my last student left I did some basic tidying, packed up all my devices, made myself some dinner and the boy and I watched Firefly. I went directly to another Facebook live after that. It’s a thirty day thing and will be over today.

After that I sat in the kitchen, dirty dishes piled high, past bedtime and started this post. And weighed my options. Should I do the dishes? Go to bed even later? Or not and deal with that sad mess the next morning? Should I set an alarm? Try to sleep in? Decisions, decisions.

I stuck the lunch leftovers in the fridge, stacked the dirty dishes in a way that made breakfast possible and went to bed.

Today there will be all the things. Running and lots of dishes, apparently, maybe mopping the floors that would be cool. Also, working on the novel-in-progress, preparing the next podcast episode, maybe writing the newsletter already (I had a great idea while dusting and started research right away – as one does). There will be the watching of Voyager and lots of conversation with the rest of the family.