Woke up early, didn’t find my way out of bed, went straight to breakfast. Afterwards I watched a video and was just about to start a brain dump in my journal because I thought that might help me get productive again when my husband showed. Right on time, by the way.

There was talking and knitting. My new needles arrived so I can transfer the cardigan-in-progress to something not quite as blunt.

I spent more time trying to troubleshoot my Fitbit Versa but didn’t succeed. When my husband was finished with breakfast the boy showed up. There was more talking. He helped me with the dishes and I did the usual morning chores. By the time I was ready to go to the supermarket it was already 11.30 or so.

I made a detour to throw an envelope with two guitar picks and a note in a student’s mailbox. I had forgotten to wish him a belated happy birthday on Monday and he is starting to learn how to play chords on the guitar and that is no fun without a pick. I always give my students a pick at that point. I couldn’t send it through Skype, though.

The tiny mall with the supermarket was rather busy. They had new signs at the doors: 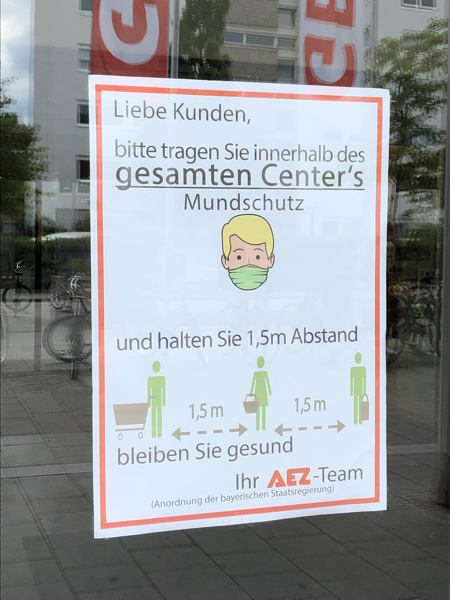 It’s pretty funny if you can read German and know something about grammar and typography. It says, „Dear customers, please wear a face mask everywhere in the center’s and keep 1.5 meters of distance, stay healthy, your AEZ-team (order from the Bavarian state government“. Basically.

The funny thing is the not-quite apostrophe after center. First, it’s nice that they are using the genitive, that’s almost dying out by now. Unfortunately, the only time you get an apostrophe in a genitive in German is when the word is ending in an s anyway. Like „Klaus’ Fahrrad“. So, not only is it a green grocer’s apostrophe but they also used an acute accent instead of a real apostrophe. I also personally dislike the fact that they are writing ‚Center‘ instead of ‚Zentrum‘ but that’s my preference, ‚Center‘ is pretty common by now.

Sorry. I can’t help pointing these things out, they do bug me a lot.

Grocery shopping went really well. I should have taken an „ineffective face mask bingo“-card. I wouldn’t have gotten a full card but almost. On the other hand everybody in there actually did wear a mask. Granted, one woman had pulled hers down under her chin and two pulled theirs down to talk to a sales woman (who was behind a shield) but still, people are making an effort.

I had ample opportunity to study the fit of all kinds of masks on all kinds of faces. I’m rather interested because I’m not happy with the ones I made. Today my husband tried the one I made for him and was not pleased. I will have to try another model next weekend and maybe put darts in all the masks I have already made. Meh.

When I came back home lunch was already in progress, in fact, my husband had finished eating by then. With the detour my shopping tour took ages. They did leave me something to eat, though, and it was rather tasty: 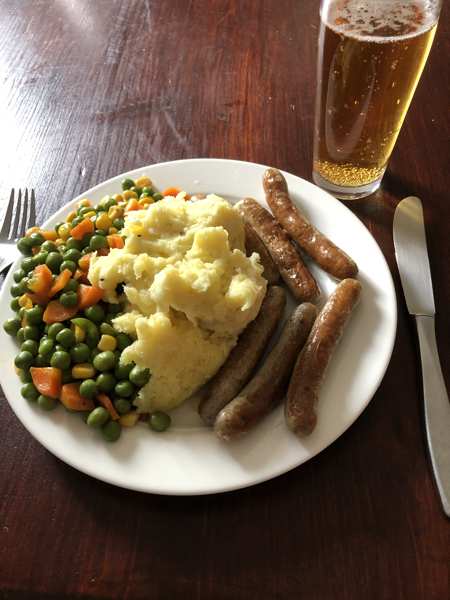 You might have noticed that our attempt at eating mostly vegetarian has come to an end. My husband and I both found that meals with no meat equal meals with more veggies which might be healthy but really doesn’t agree with people who are fructose-intolerant. So we’re back to our meat-eating ways. It’s a pity, I really liked the idea but it’s not worth constantly feeling bad.

After and during lunch the boy had a great deal to talk about. More linguistics, if I remember correctly. Also, his grievances about school. We did the dishes together again and then I had a short break before starting to teach.

In between students I folded two loads of laundry and hung up another one and printed some sheet music out that a student had sent me as a bad photo. It’s amazing what you can do with modern technology. She takes a pretty bad picture of her sheet music then I take that photo, put it into an app and end up with a much clearer image that I can then print out on my printer through my phone. And then I can follow along with what she’s playing. Marvelous. The lines are still all wav but you can actually read everything. Fabulous!

I had spent most of the day waiting for delivery of my new Apple Watch. Since the Fitbit was acting up I looked at a replacement and found that the Apple Watch 3 is priced pretty reasonably. So I ordered one that was due to arrive some time yesterday. Needless to say it took until after dinner before I held it in my hands.

So far it is delightful. I mean, the packaging alone is soothing and beautiful. As with all my devices it was easy to set up. I’m still blown away by these modern times. I buy a new phone or tablet or smartwatch, turn it on for the first time and it says, „If you already own another of our devices just put it next to this one and everything will be magical done“. Then I wait a bit and everything is synced and ready to go.

I did play with the watch for a while, then started this post, wrote in my journal and went to bed a little too late.

You might have noticed that I did not work on the podcast, did not do yoga or work on the novel. I’m not happy about that but I was feeling somewhat sluggish and had a lot of things to do on top of that. I spent most of the afternoon with that feeling of having a headache without a headache. At least that was gone after dinner.

Today there will be running, more playing with new gadgets, a moderate amount of teaching and maybe, just maybe, I will actually look at the podcast again. Wish me luck!