I woke up early, got out of bed and saw that my Fitbit watch was showing a heart rate of 190. And had done so all night. Now, I wasn’t having a heart attack or something, it seemed the watch was acting up so I spent half an hour on that.

I did manage to do yoga but then spent more time with the watch issue. Had breakfast, watched a video and then my husband showed up. I did feel rather depressed and low and like I’d never get anything done ever.

We talked while my husband was having breakfast and then the waiting for the boy began. And there was more waiting. He was twenty minutes late and by then I had started doing the dishes. He did help, though. More talking with husband and then I called my mother on the phone. We talked for too long so I was late for helping make lunch. We were planning something special: 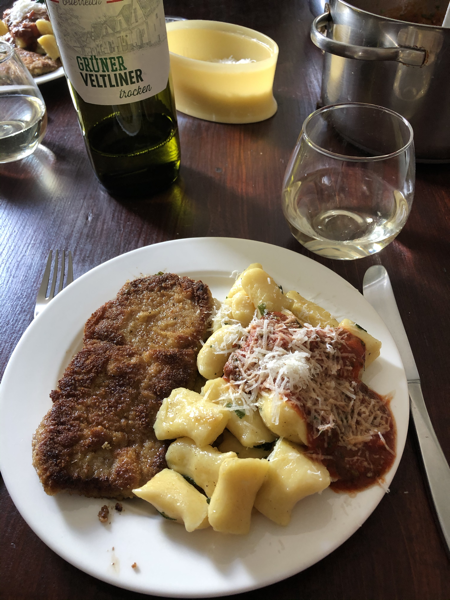 Those are veal cutlets, homemade gnocchi and tomato sauce. I made the gnocchi which does take some time. They turned out very good this time, if I say so myself.

Then I procrastinated a bit because I was feeling so low but finally I did prepare the podcast. And then even recorded it. I never managed the lighting or the makeup or anything but still: 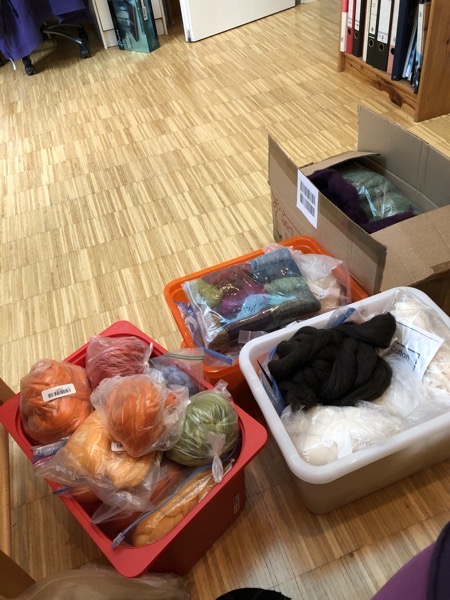 I pulled out my whole spinning stash for this episode. I hope I’ll manage to release it soon. The iPad cut me off after an hour but I did record the outdo as well and then, just for a few minutes, I thought that there was nothing saved for that one hour. I thought I had sat down, talked for an hour and held my spinning fiber and projects into the camera and had nothing to show for it.

I was pretty relieved to be wrong on that one. I left the iPad there so it could upload the videos to the cloud and went off to have dinner.

The boy and I ate in front of TV (I know, very classy). We started watching ‚Firefly‘. I’m happy to say that he really loved the first episode. That show is still amazing with excellent storytelling, great camera work, wonderful actors and superb setting and tone. That made for a very pleasant evening. And we both needed that, both the boy and I had been all cranky all day. Um, for several days to be honest.

Funny how recording the podcast and watching something really outstanding did lift my mood.

Then I decided to order a new smart watch. It’s really my husband’s fault. Every time I complain about something and tell him that I’d rather get something new because the old thing is starting to fail he tells me to go ahead and do it. I did have to restart and re-sync the watch constantly all day so it wasn’t without reason. I’m still feeling a little weird about spending the money. I will be able to re-budget, though, there is money left that we don’t really need right now, so things will be alright.

I tidied the kitchen, started writing this post and went to bed. A little too late.

Today there will be running and teaching and maybe some work on the podcast. I might have recorded it but that doesn’t mean it’s out.

One more week until Pentecost break. With the boy home again. He says he has a ton of homework.