Woke up at 5.30 and promptly dozed off again. Started to do yoga and stopped after a mere three minutes because I just wasn’t feeling it. Had to use the one lonely yoghurt that was still in the fridge that was the only one I could get the week before. Didn’t like the taste and felt awful after eating. I wasn’t sure if I was sick or had eaten something that didn’t agree with me. Might have been a fructose overdose, maybe. I felt nauseous, didn’t have any energy, had a light headache and was cold all day.

The boy came down for breakfast on time and by then I decided to not work on anything. There was some knitting and some talking. I did dishes and some housework and then had to go and get all the groceries.

The nearby supermarket where I don’t go often was completely closed. I had forgotten that there was water damage. Apparently the store hasn’t opened yet. So I went to another supermarket around the corner. I did get almost everything I wanted but I won’t forget the cashier who coughed into her hand before handing over my change. Ugh. Yes, she did wear a mask but still.

I took a picture while out because I was listening to Joanna Penn’s podcast and she was asking listeners for pictures: 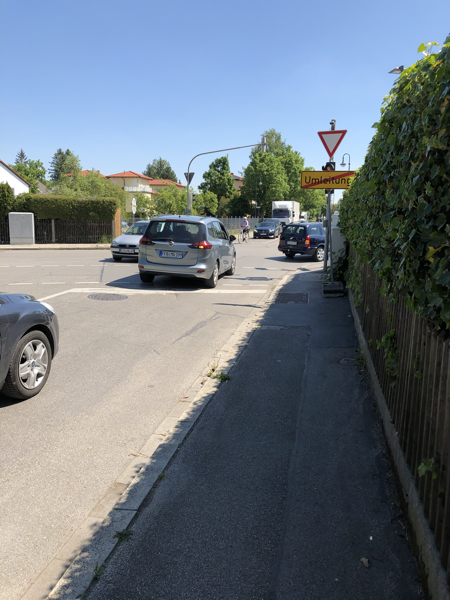 Back home I put everything away and then went out again for round two. Off to the health food store.

When I came back my husband was in a big cooking panic again, things went wrong but we did eat on time: 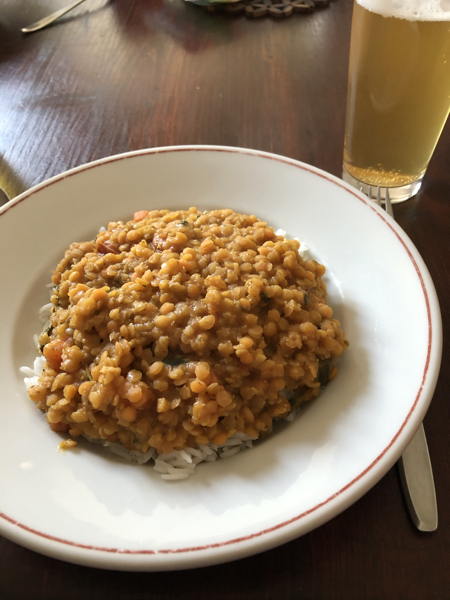 There might have been too much salt in the food. Then there was dawdling. I still didn’t feel good and I might have dozed off while sitting on the kitchen bench reading.

I also restarted the wifi router and in the end decided I’d rather get a new one. The one we have appears to be going a little flaky and I don’t want to risk it breaking down right now. Even our landline is connected to it. So I did some quick research and ordered a replacement. I am really, really glad for a budget where I put a certain amount of money away for replacement devices. Never mind that the constant replacement of smaller gadgets means there will never be enough money in there for a new laptop when I will need one in a few years.

Then there was teaching. Only a few students and lessons were nice. There was also construction work at one student’s house and a really, really bad connection at another one’s. That bad connection made me look up the internet speed at our address. I spontaneously decided that I’d like something faster, found that the fastest that I can get here would only cost about fifteen euros per month more and changed my plan. Come June we will have really speedy internet.

I had something to eat and tried starting a new sweater but was not quite in the right mood for thinking the whole thing through. So I grabbed the mindless shawl in progress and my spinning wheel and went back to my studio for the virtual knit night: 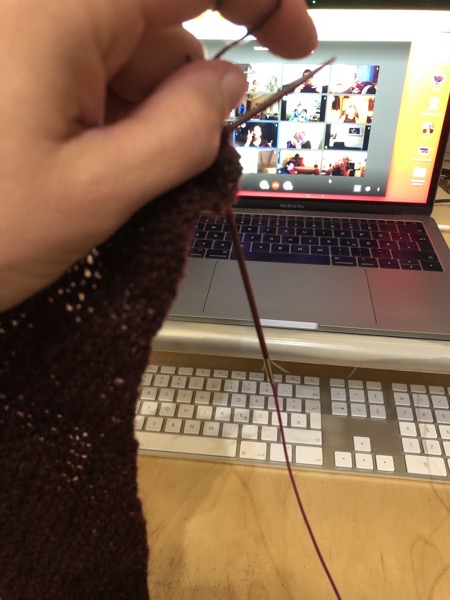 There were fifteen of us who sat and talked and knitted or spun. It was rather nice but I wasn’t really in talking and listening mode. By then I was feeling quite a bit better but still tired. I left pretty early, talked with my husband a bit and came into the kitchen to this: 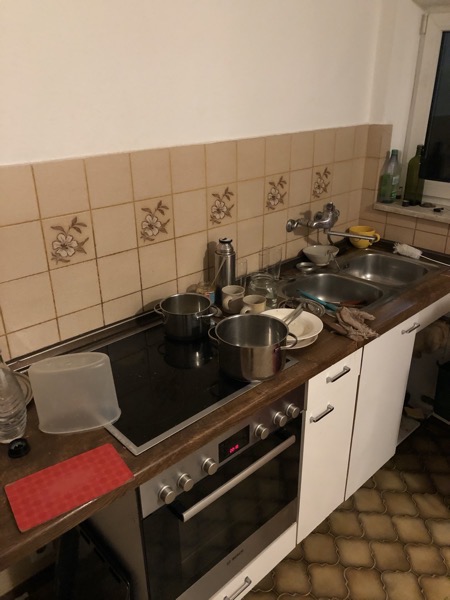 Not the best conditions for this morning’s breakfast. So I did all the dishes. I was pretty cranky about it too. Made the mistake of telling my husband exactly how I felt about it which made him storm over and help. Somehow he was pretty cranky too. Funny that. All the cranky talk at least reminded me that I needed to put out the trash can. I met our neighbor while doing that. Turned out that he takes his cues about trash day from my mother-in-law. Who is still in the hospital. That morning we had almost forgotten about setting out the egg cartons and money for the weekly egg delivery. We were almost too late.

Then I started writing this post. I read a little and by then it was way too late.

Today there will be running and some teaching. I’m hoping to prepare and record another podcast episode. But the day will be pretty full and busy without it, so we’ll see how that goes. And tomorrow will be a day off. Phew.