I woke up around 5.44 and actually got out of bed ten minutes later. Got dressed, did yoga and then meditated for five minutes. I tried using the guided meditation offered by the very sweet woman who does the yoga videos I’m using but found that the affirmations she is using are rubbing me the wrong way. I think I am a pretty positive person in general but every time somebody says something like, „I am safe and sound and nothing can harm me,“ or that very American thing, „Everything will be okay,“ my first impulse is to get up and counter with, „No, you don’t know that, don’t lie to me!“ And sorry to break it to you but as far as I know we’ll all die eventually. Now, I am rather convinced that death is not the worst thing that can happen to me but still.

My whole point is: please don’t promise things you can’t control. Thanks.

No idea why I got a little morbid there. Sorry. Anyways, I’ll just go back to just my regular meditation.

Then I wrote morning pages. Achievement unlocked! I made breakfast early enough that I could actually look at the novel-in-progress even. Hurray! I had been waffling between finishing it now or later but in the end decided that I need closure most of all. Having something lie around almost finished was continuing to bug me. Of course, the plan was to spend some time on one of the other novels as well but that didn’t work out.

My husband showed up and built a fire (it’s still really cold here) and during his breakfast talked to me about, um, lots of things that I frankly don’t remember. Oops. The boy was late again. I think that is a sign of him dreading his return to school next week. The husband went running and I did dishes and started cleaning a little late. We had to google something while washing up, as you do. We did look up hormones and chemistry that day and Africaans, Dutch and Frisian. You know, the usual. Oh, and at some point during the day the boy and I had a disagreement about the color of one of the peonies in the garden. There are three visible from the master bedroom. Two are clearly red but one is a reddish purple and we couldn’t agree if it is violet (the boy’s chose and clearly wrong) or a reddish purple. Maybe boysenberry? It is interesting how often the rest of the family disagrees with me on colors.

I did eventually clean some things but didn’t get to the bathrooms before it was time to make lunch. While my husband was cooking I folded about two loads of laundry and then had to stop in order to help making salad and deal with all the fresh herbs. Lunch was very good but unfortunately had an hour late: 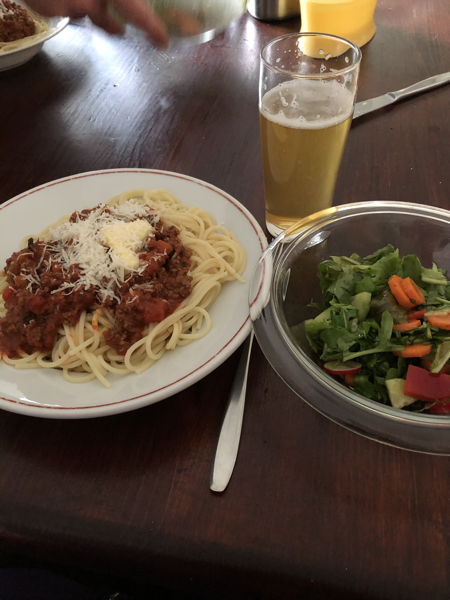 So I did not do the dishes before my first lesson of the day because there was no time.

Taught non-stop until 4 and then the student couldn’t be reached. Later, it turned out that they had put the wrong time in their schedule. Nothing to be done, unfortunately, especially since this was a reschedule for another lesson they had missed. I’m hoping to see them again next week. I had a short break that I used to wind yarn into balls and find a pattern for a lace cardigan I want to make.

Then another student and dealing with all the admin from the day’s lessons. My husband and I have found that the best way to deal with it is to just accept that we need to tack on another thirty to sixty minutes after finishing teaching because otherwise we end up forgetting what we promised or sending things way late.

Then I cleared the living room surfaces of piles of laundry and we got read for the ritual watching of Star Trek. Both episode were rather good and I did some spinning.

Then the huge pile of dirty dishes awaited me and the boy helped, there was even more talking and then I started writing this post, wrote in my bullet journal and went to bed.

Today there will be some running, the cleaning of the washbasins and toilets, the preparing of another podcast episode, some sewing (I hope) and I also seem to have promised my husband to help him sort through all the spinach and maybe repair the greenhouse because the new panels for that arrived yesterday. We’ll see how much of that I will get done.