I woke up early and managed to meditate, write morning pages and do ten minutes of yoga. Breakfast was only a little late at around 7.30. My husband showed up early to build a fire and make coffee on the wood stove. The boy was a little late but not as late as the day before.

I was pretty anxious because of m gynecologist appointment with a new-to-me doctor and because we hadn’t heard fro my mother-in-law since she went to the hospital the night before.

I went to my doctor’s appointment and all went well, the train was almost empty, I wore my mask, everything was fine. The doctor’s appointment went spectacularly well. He is a former student of my husband and we started with chatting about learning guitar, reading music and the fact that his daughter might be looking for a singing teacher. Then I recounted the whole ‚possible yeast infection‘-saga for him. He did actually listen, he explained his reasoning in detail and explained just about everything. I like learning things and getting details so that was good.

As I had thought I don’t have a yeast infection after all. After four different kinds of anti-fungal treatments that seemed rather improbable. Also, it turns out that women my age and older don’t get those anymore. Instead my problems are probably due to a lack of estrogen, again something that is pretty common, and so that’s what we’ll be treating. It might take some time to show results but that’s okay with me, at least I don’t have an infection festering away.

So, looks as if I have a new gynecologist. Phew. I’m really relieved and feel like I’m in good hands.

Then I took the train back home, went to a supermarket that was on the way and to the pharmacy. When I came back home somewhat late for lunch the others were just getting ready to sit down. Yummy lunch: 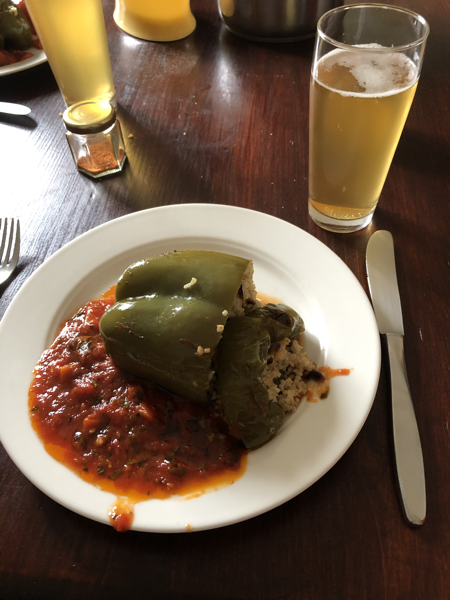 Stuffed bell peppers with bulgur and tomato sauce. Not pictured is extra feta and extra parmesan.

Then dishes. While I was away my mother-in-law had called and left a message. She was feeling okay and getting electrolytes and more tests. Her Covid-19 test was negative. While the boy was helping me with dishes he got a message that he should go to the school to fetch equipment for the experiments he needs to do for his big paper that will be due in the fall. He didn’t really want to leave the house which I totally get but I told him to go anyway. Next Thursday will be a public holiday which means it would be today or two weeks later and who knows what will happen then?

He came back after only thirty minutes or so with a big bag full of instruments and inductor coils. (I’m not quite sure what it says about me that I didn’t have to look up how to say ‚inductor coil‘ in English.) He was happy to have met one of his best friends. They are in different groups at school and haven’t met for weeks. Won’t really meet in person either and were keeping the appropriate distance anyway. Still.

Then I helped my husband with some technical stuff and started teaching. All hail the video chat.

Then dinner, more talk with the boy and with my husband and another phone call from my mother-in-law, she expects to be back home today in the afternoon. I started writing this post and went to bed.

Today there will be the cleaning of the house, loads of teaching, the folding of all the laundry, maybe the changing of sheets, the watching of Star Trek and the spinning of the yarn. I also might have ordered a rubber duck because I need to implement a rubberduck debugging protocol in my life. I hope it will help with clarity.