Woke up at 5.34, started reading right away, did not do yoga but was happily entranced in the story until 7.30. Had breakfast, read some more, talked with the rest of the family.

At 10 my mother-in-law had somebody install a hand rail on the stairs leading to the basement so there was noise. And strange people in the house. There were dishes and laundry. Then I went out to go to the health food store. This time I went to a new one I had been told about. You know like, „M just went to this new store right behind the bank.“ I had to look for it for a while until I remembered that what is ‚behind the bank‘ for M is actually ‚before you reach the bank‘ for us because she lives in a different part of town.

The new store is pretty big and has fresh meat, cheese and bread which is good. It does have a bit of a ‚hip and vegan‘-vibe but that’s probably to be expected in that kind of store these days. Lots of ready meals and snacks. But also green bell peppers that are usually hard to come by and ground lamb.

When I came back my husband was deep in the trenches of what started with, „The spinach is ready to be picked, I thought I might make some Indian food.“ I spent 45 minutes washing each leaf of spinach individually by hand so that we didn’t have to eat bugs. Lunch was one hour late but tasty: 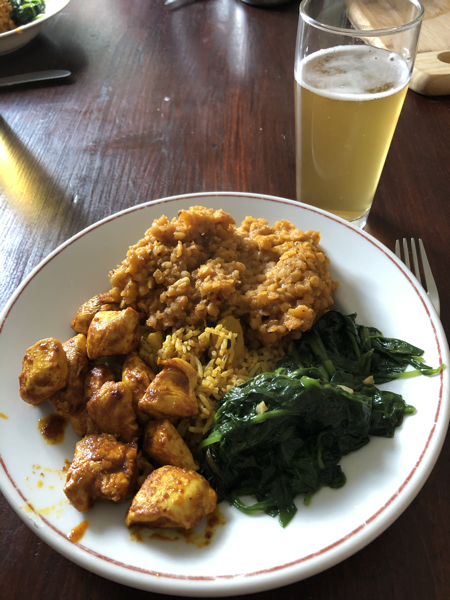 I didn’t have time to do the dishes before I had to start teaching. I taught two students and then failed to take advantage of the generous break before my last student of the day. I did hang up a second load of laundry, we did two in all. And then I waited in vain for my last student, apparently she forgot. I had a breakthrough with my second student of the day because she moved the camera in such a way that I could actually see her hands which meant I could explain to her how to play scales properly. Ha!

The boy and I talked over his dinner and I ended up pulling out all the books about Andean textiles and backstrap weaving and then went back and showed him my backstrap loom. It doesn’t look like much at the moment because it’s just a collection of sticks. Still. Then he showed me the clothes he had ordered and we decided on what to send back because it doesn’t fit at all. Guess I’ll have to go mail a package soon. Or maybe the boy should be the one to do it. Yep. Good idea.

I’m still dissatisfied with the yarn and knitting project situation in this house and started looking at self-striping yarn but it went the way it always does, I end up looking up how to dye self-striping yarn and then I decide that I don’t have the time and that’s it.

Then I started this post, read some more and went to bed.

Today there will be the running and quite a bit of teaching, no idea what else. I’m totally not driven to doing anything right now. It also feels as if I don’t have time for anything but that’s definitely not true.