Woke up early, did not manage yoga or anything helpful the whole morning and was rather grumpy because of it. I did start a new cowl for my husband after breakfast and found that alpaca and I definitely don’t mix. I already knew that I can’t wear it but when knitting with the really nice and soft yarn made me sneeze and feel itchy all over I knew that project would never see the light of day. So. I have three balls of light gray, very nice and soft alpaca yarn that is useless to me. I hope I’ll find someone who wants it.

Then I went to the pharmacy with another prescription from my gynecologist. Maybe fourth time is the charm. Then I went on my run/walk. Because I felt so grumpy and down and unmotivated and cranky I decided to not run most of the way. Well, 7 k of walking is still exercise. The weather was nice and there weren’t all that many people out: 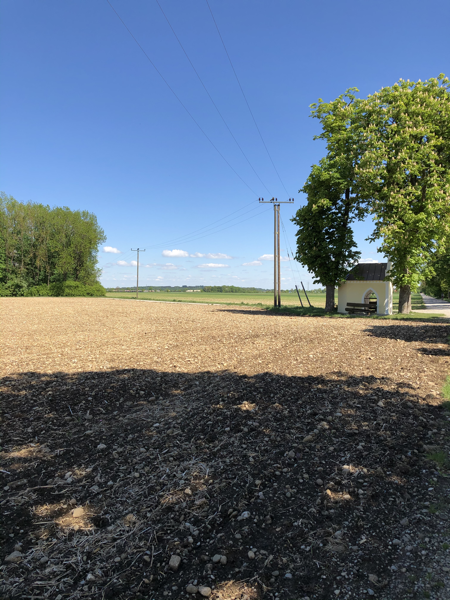 It wasn’t as warm as it looks, in fact my husband built a fire that morning and cooked lunch on the wood stove. Still. Pretty. Sunshine: 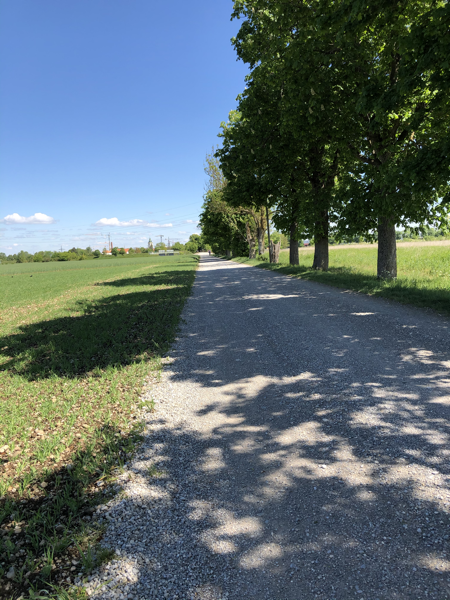 I came back home, took a shower and tried washing my hair with all new product following the ‚curly girl method‘ as best as I could. I should have taken a picture, sorry, but there wasn’t much time. I can attest that my hair is more curly indeed. The new shampoo smells fruity and flowery but it’s tolerable and way less overwhelming than what the boy uses. He basically smells like a tropical fruit basket for a while after washing his hair. I tried his shampoo once and had a deep urge to get away from my own hair’s smell for two days after. (There is a reason I always washed my hair when coming back from the hairdresser.) His product is for curly and thick hair. Mine might be wavy but thick it isn’t. 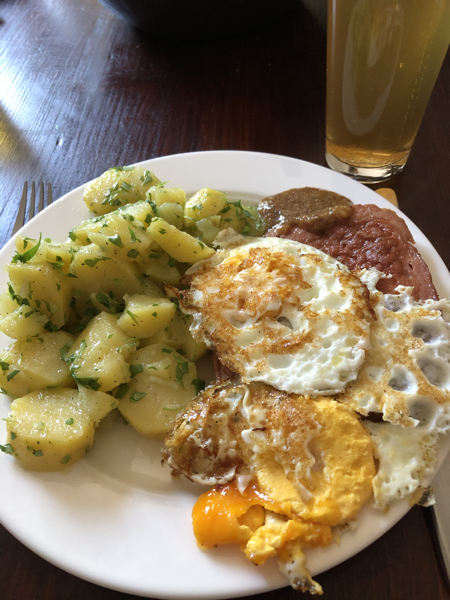 My husband is struggling with the fact that now that he has started to throw himself into video lessons there might be a chance of us getting back to teaching in-person soon-ish. None of us is happy that apparently the boy will start school again next Monday. Mostly because of my mother-in-law but my husband and I are also a little at risk.

I don’t think music lessons will start again that soon, definitely not before Pentecost break. Today we tested doing online drum lessons in-house because the part of the basement where the drums live is really small. It would be possible to let a student in, have them go downstairs to the drum set (many of my husband’s drumming students don’t own one) and then teach them from upstairs all while keeping the proper distance. I’ve also thought about how to keep that 1.5 meters while teaching piano. I guess I would have to set up a separate keyboard so that the student and I can sit far enough apart and that we never touch the same keys.

Online lessons are much safer, though. And they do work remarkably well. By now we all have gotten used to them and most students have found a setup that works as well.

Of course, when I start teaching yesterday afternoon there were many troubles. The Skype call with the first student broke up after fifteen minutes. We tried reconnecting for ten minutes, then I called him on the phone. We got the connection back for a few minutes and that was that. And with the next student we both tried but never could get the call to work. We rescheduled completely.

So I prepared the next podcast episode.

Then taught two more students without any problems whatsoever, sent some emails to students and such, was reminded of Miriam Makeba’s song „Pata Pata“ by someone on Ravelry which led me to yet another research rabbit hole from which I emerged with a freshly bought Dizzy Gillespie album. The poor boy had to listen to „Pata Pata“ in its entirety and then to selected Gillespie songs complete with an explanation how jazz improvisation works which I swiftly explained by playing „The Nearness of You“ with Ella Fitzgerald and Louis Armstrong.

The whole Gillespie album reminded me of the nineties when I lived in Munich, played the album „Con Alma“ on repeat on my Walkman and practiced improvising by singing along to all the solos on that album. Unfortunately, that album is nowhere to be found. But the thing I bought seems to have most of the important recordings from that album so I’m fine. The boy was pretty game to dive head first into Afro-Cuban BeBop but that’s definitely not his music.

Oh, and the books. I might have gotten four new books yesterday. All of them free. But I’m definitely reading less than I want to. I have gotten eleven new books already this month, most of them free or in Kindle Unlimited but so far I only finished one. That’s partly due to the fact that I’m reading all the material for the class I’m taking and watching a ton of video to absorb all the information. Well.

I am enjoying „Defy or Defend“, the newest Gail Carriger, though.

So. Today there will be a supermarket run, the recording of the podcast (I hope), a little teaching and then a virtual knitting meeting in the evening.