Don’t worry, I didn’t go out and meet people.

I woke up early (not enough sleep yet again because the boy and I talked until midnight, yawn) and lounged about. I am fully occupied with taking the material of the „Strengths for Writers“-course in and have to admit there isn’t much space in my head for anything else.

I started the day by blogging and didn’t even touch my bullet journal. So no list for the day. I did spend some time trying to fix the issue with my pictures not syncing between my phone and computer.

Long conversation with my husband, then running /walking. Look how green everything looks with the rain: 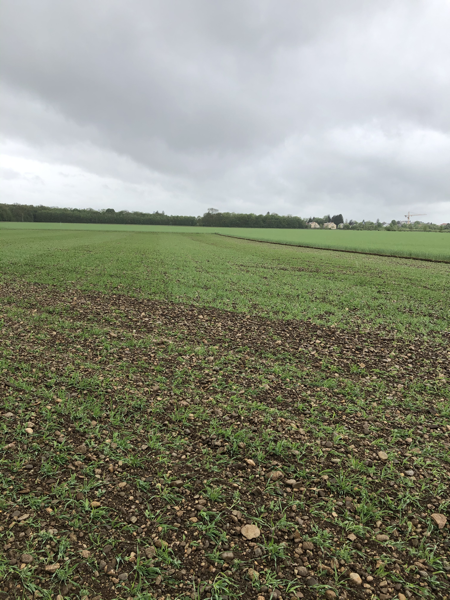 I was rather lazy and couldn’t make myself run a lot so it was basically a long walk. 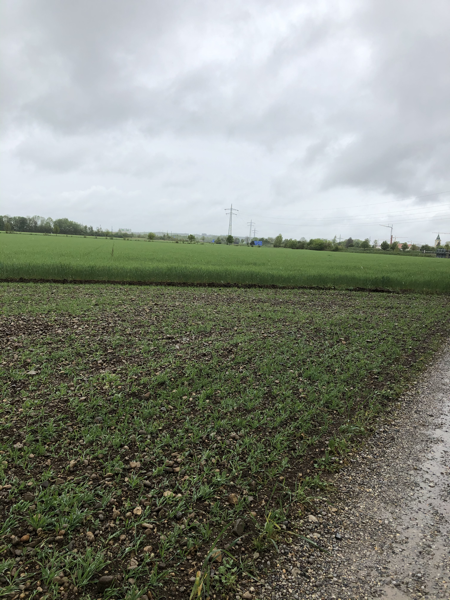 Because of the weather there weren’t many people around. It was pretty chilly and I really should have worn gloves or fingerless mittens. When I came back home my fingers were so stiff that I couldn’t unlock the door. Fortunately, my husband heard me.

My husband has started doing all the cooking without help which is both nice and a little strange. In return he isn’t helping with dishes anymore. We had the leftover chicken from Monday with assorted other bits: 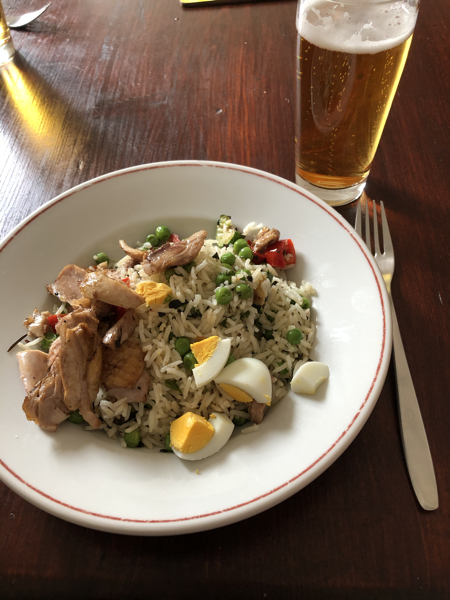 Then dishes, a short break and some talking about work with my husband. Then I started teaching. I had a short break that I used to test the setup for the virtual knitting meeting that night. We were using a new-to-me system that required installing a different browser and/or an app. I had to decide if I wanted to use the iPad or the laptop and since the hosts had asked us to use headsets I actually tested different ones by recording myself on my laptop while speaking into them. (Yes, I am a bit of an over planner. Also a geek. Sorry. Excessive prep is my security blanket.)

Interestingly, the gaming headset I borrowed from the boy was not the best solution, my old iPhone earbuds were the clear winner with my new bluetooth ones being almost as good. In the end (for all of you who aren’t bored with details yet) I decided on a combination of laptop and phone earphones because using cables to connect things is usually faster and makes less trouble. I might test the bluetooth earbuds for recording the podcast, though, because being free to move might be worth it.

Then there was more teaching. My singing student and I decided to move his lesson to a different time slot because at 6 pm the internet starts to slow down. I’m guessing that people are starting to stream Netflix at that time.

After my last lesson I grabbed a quick sandwich and my knitting and spinning project and went right back into my studio for the meeting.

It was wonderful. There were about a dozen of us, all people I had met through Ravelry before. Most of which I had never met in real life. Since I was a little late I missed the first few introductions but still. I had so much fun that I stayed in the meeting until 10 pm. I had a beer, I had a lot of fun and I even managed to turn the heel of my sock-in-progress with only having to knit back five rows or so. (New record for this pattern. I’ve knitted it five times already and I always screw up the heel turn.)

Online afterwards did I realize that I shouldn’t have mixed alcohol with my anti-fungal meds. Oops.

Meeting all these people and knitting was really wonderful but I have to say that communicating via video chat is even more exhausting than in person. It’s harder to see whose turn it is to speak next and where you can sort out people talking over each other in real life the video chatting software usually boosts one speaker and turns down all others. Which might mean that someone getting up from their chair is the loudest thing in the room and prevents everyone from hearing what someone else is saying.

Still. I continue to marvel at the wonders of technology. We should definitely do this more often. I’ve been thinking about adding video meets to my Patreon for the podcast for years now, no idea if anybody would be interested.

I stayed up for another hour (or two, things became blurry at that point), decided to move all blogging and journaling to the morning (which is why this is later than usual) and turned the lights off. Long day, pretty exhausting but nice.

Today there will be the grocery shopping, the teaching, maybe the strength training (I’m still not doing that as much as I’d like to). It would also be a good idea to get started on my challenging homework because I promised to have that done by Monday but frankly, I’m not sure when I should be doing it. And I want to sit down and make a plan for May but I’ll do that tomorrow, I think.