Not that it was a bad week, it’s just time for the weekend.

I woke up early as usual and since I have totally given up on being productive in the mornings I enjoyed some guilt-free scrolling and internet-reading and book-reading. I had finished „Code of Conduct“ and started „Code of Honor“, both by April White, both in the „Knitting in the City“-universe. I like what I’ve read so far.

Had breakfast, talked with my husband for a long time. Mostly about how to say ‚no‘ to people and how maybe someone else being angry at you for a bit because you politely declined to do what they wanted might be a better option than you being angry at them continuously because they are always demanding these unreasonable things from you. Basically, that conversation went on from breakfast until after lunch with lots of breaks for other stuff.

Shorter talk with the boy who is late working on part of a paper and then the weekly cleaning. Phew. Including washbasins and toilets. Then I helped with making pizza: 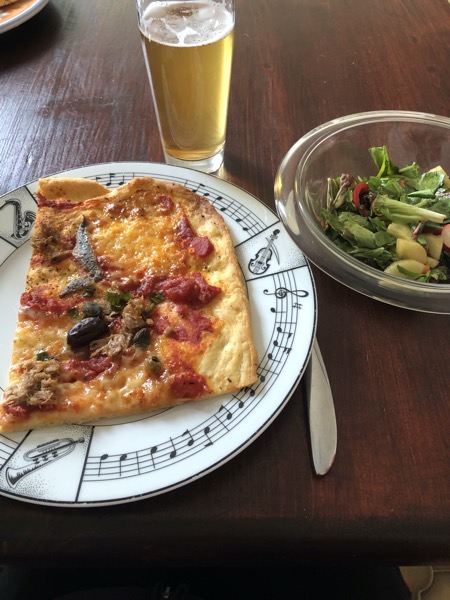 I did not do the dishes because there wasn’t much time until my first student of the day. I taught straight through, all afternoon until 6.30, then met up with the boy for an episode of Voyager and one of the animated Star Trek, then we did the huge pile of dirty dishes together and that was it.

Oh, and in the morning I called my gynecologist again because the maybe yeast infection hasn’t cleared up yet. Hurray. Or not. I’ll get another prescription in the mail. Stay tuned.

Today there will be running and asparagus (my mother-in-law decided that she had to go out and get some, yeah, I thought it was a bad idea as well) and some sewing of face-coverings and a lot of reading for sure.