Wow, this one took ages. I had so many technical difficulties that it took me about three times as long as getting it ready for publishing. Which doesn’t bode well for my new podcast production setup.

Other than that the day was actually mildly productive. I woke up at 5.30 and while I did not do anything on the novel before breakfast I did spend half an hour after breakfast formatting and exporting it so I can read through it with fresh eyes. I am now officially stuck and I think I need to reacquaint myself with the story.

Other than that I spend a lot of time thinking about the things I learned in the „Strengths for Writers“-course. I also started re-reading „Dear Writer, you need to quit“.

My husband and son showed up on time, we had breakfast, things went well. Then I forgot all about yoga and somehow never found space in the day to do it later. I started working on the podcast show notes while my husband was making lunch: 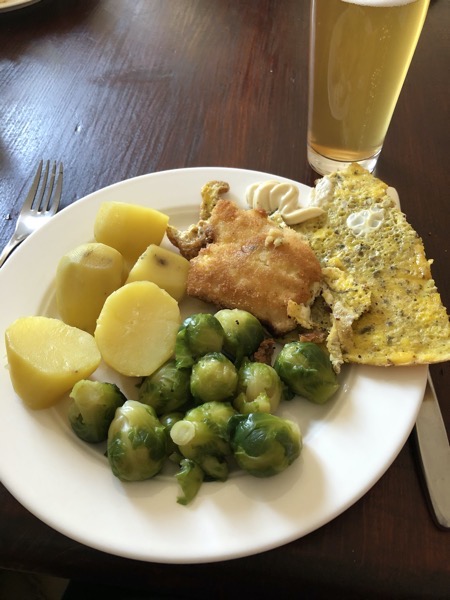 It doesn’t look like much but it tasted very good.

Then there was more work on the podcast, I did the weekly planning and finally got that podcast episode out the door. There was a conversation with the boy about Chinese characters and about perspective in drawing through the ages.

I decided to make frozen pizza for dinner and have a beer and only afterwards realized that a) I almost had forgotten to take my new medication and b) that taking that medication with a beer was not the bestest move. Well, couldn’t be helped.

Both Voyager and the animated Star Trek were pretty good for once.

Since I was already sagging while watching TV I went to bed early.

Today there will be running and quite a bit of teaching and all the email. And different kinds of reading.