I was so excited about the whole „Strengths for Writers“-workshop thing that I went to bed way too late and also woke up too early at 5.15. And then I dove back into what was exciting me again.

I was all excited and happy and feeling optimistic, had breakfast and when my husband showed up I talked at him about the whole thing for quite some time. Until it became clear that my husband had wanted to talk about something completely different instead. Because the night before the German government had talked about how to ease back into some resemblance of normal life over the next few weeks my husband thinks that this is the time to plan for when our students will be back in person.

Um, I beg to differ.

I guess quite a few people heard, „School will start again for students who are supposed to graduate before the end of the school year on May 11th in Bavaria,“ and „small shops may open again next week“ and understood, „Normal life will recommence shortly.“

I had started to think about what we’ll do throughout the next months too but then had reigned myself in and decided to wait until there would be a timeline for this. I am also thinking that it would be a very good idea to continue teaching remotely for as long as possible. Even though the teaching is somewhat frustrating.

Then I went to the grocery store. Scored a huge packet of toilet paper and could have bought a big chunk of yeast but decided against it because I already got a small one last Tuesday. The grocery list was pretty short, I could carry it all without help.

My husband made shrimp risotto: 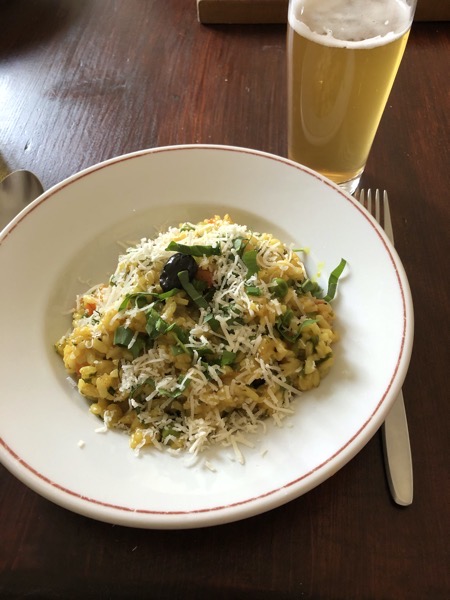 It was wonderful. I am starting to get a little tired of the wild garlic but there isn’t much left anyway.

Then I talked with the boy, hung up a load of laundry and taught my one student of the day. I got myself a thingamabob to connect the iPad to the internet via Ethernet because I was hoping it would be faster than wifi. Well, the good news is that it is working. The bad news is that it didn’t work with FaceTime. Weird.

Went back to the podcast, found that the fix that took almost three hours to render the day before hadn’t fixed anything and proceeded to mix the Youtube portion of the podcast completely independently of the audio portion. That took about an hour and I still hadn’t listened to the podcast or written show notes. 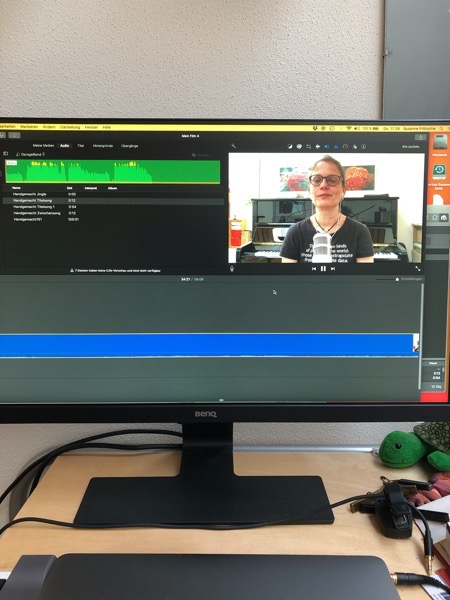 The health thing I’m having that I thought was a yeast infection and was treating like one didn’t get better with the treatment. So I googled my symptoms. And realized that I had reached the point where I really wanted to see a gynecologist about this. So I called in and got an appointment for later today. Not the right circumstances for tele-medicine, I’d say.

The boy and I watched some Voyager, I did not exercise because I really didn’t feel up to it but managed to go to bed on time.

So. Today will bring an actual outing to the doctor, quite a bit of tele-teaching and another evening of watching Star Trek while knitting. And then the weekend.