Woke up around six again and had another slow morning. I did write for fifteen minutes, though, so that was good. Everybody else showed up right on time too. And I finally finished sewing my face mask: 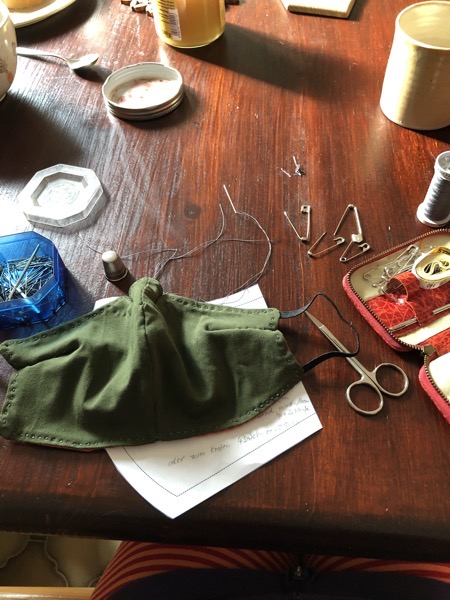 The good thing about hand-sewing is that it is really portable. I’m trying to get used to the thimble and failing. At least this one actually fits me. I only realized that the one that came with my sewing kit is too small. That sewing kit has sentimental value even though it is somewhat ugly and not high quality. I got it for my confirmation from my grandmother’s twin sister; she bought it in the German Democratic Republic where she went often to visit her children.

I did look through all the thimbles I own the other day. Because I also inherited my husband’s paternal grandmother’s sewing basket. And a few more thimbles from someone else’s mother. So I finally tried all the thimbles on and choose the one that fit me best. Interestingly, they all had a number on the side but I have two that say size 1 that are pretty different. At least I guess that the number 1 is the size. Anyways, I have one that fits snug enough to not fall off but doesn’t cut off circulation. 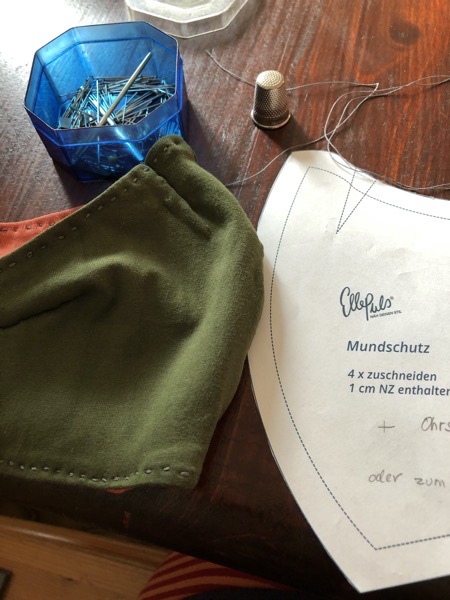 I was not looking forward to grocery shopping at all and in the end I asked the boy to accompany me. My mother-in-law did have another homemade mask, she got two from a woman she knows. The boy looked rather stylish in blue pleats with stars. We walked all the way to the supermarket, the weather was gorgeous and warm and it felt like the beginning of summer instead of spring. Then we searched for everything we were supposed to get. It takes a lot of time to find everything and there are still things you can’t really get. Like dried beans. And yeast. (I still have enough for everything I want to bake for Easter.) Having the boy with me showed me how much work this whole grocery shopping adventure always is. He was pretty spent when we came back home. And usually I’m carrying everything alone, this time there were two of us.

Back home lunch was ready and delicious as always: 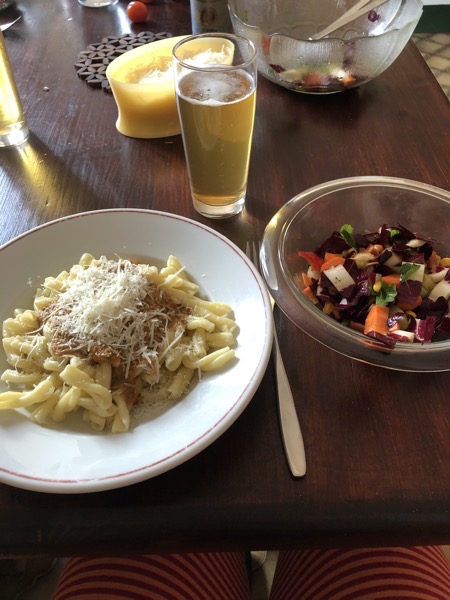 Just after I took this picture my husband exclaimed, „But there is white wine in the fridge!“ We decided to leave the alcohol-free beer for later and switch to wine instead.

After that I flopped down on the kitchen bench and didn’t move for an hour or so. Until I realized I was already a bit too late. I had to choose between hanging up the laundry my husband had washed in the morning and doing the dishes. Laundry won, but not before I had helped my husband with some computer issue.

I was barely in time for my one lesson of the day. A rather enjoyable singing lesson.

Then I have no memory of what I did next, apart from helping the boy with writing yet another e-mail. He is so anxious that he has a hard time just writing things. He always wants my opinion.

Today there will be cleaning (even though that is a big no-no on Good Friday), preparing the next podcast episode and recording it. I hope. I’d also like to do some yoga. This month was not as productive as I would have liked by far but at least I did some sort of exercise every single day. So at least that is going well.