I actually slept in until 6.50 or so. Which also tells you that I’m usually cheating a bit by writing my daily post the night before. If anything turns out wildly different than I thought it would I change it in the morning but not if I oversleep. I am starting to feel rested, though. Since I always procrastinate like crazy in the mornings and spend too much time on the internet first thing I got up as soon as I was awake for a change. Got dressed, read „The Daily Stoic“, meditated and wrote morning pages.

It was too late to writ fiction but that was way better than the days before. I made breakfast and ate it. My husband showed up early because he couldn’t sleep. We’re all still out of sorts. There was a lot of talking.

The boy’s big project for the day was a German essay. I’m sure he could have done that in a slightly more focused way. As it was he still wasn’t finished by dinnertime.

I went upstairs to ask my mother-in-law about what groceries she needed. That turned into a long talk where I tried to keep an appropriate distance. Then I went to the supermarket by bike. We had run out of more things than I would have thought. I could barely fit it all on the bike. I realized that that is one of the reasons why I am still going to the store every week. I don’t really have a way to carry that much food. Also, the shelves are mostly empty even though that is starting to change. Still no yeast in any form. And no dried beans.

I was pretty late for lunch, so I ate quickly: 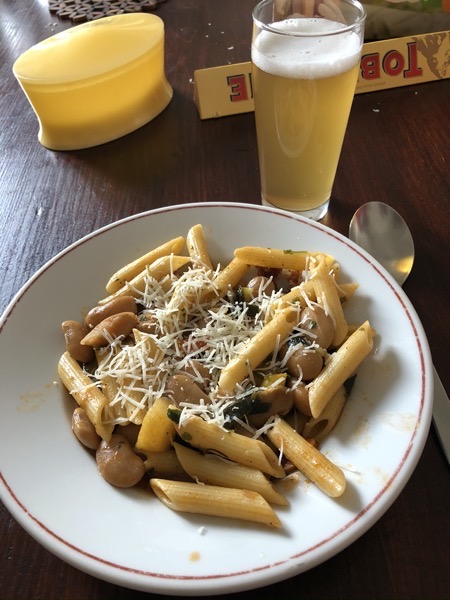 And then I hurried to prepare the day’s lessons. I did my very first singing lessons. Playing together was out of the question but I still managed to teach slightly modified lessons. And we also did some things I had never taught before. So while these online lessons are in some way lesser than the usual ones I do find that we are all more focused and working harder on the music. Which is good.

I had planned to do strength training afterwards but was hit with an attack of the dunnwannas again. So I started writing this post, ate some chocolate instead, spun a bit, read some more of „Blood and Ash“ by Deborah Wilde (highly recommended, I am halfway through right now). The boy came to talk with me while I was still in my studio and told me that my husband had helped him with his essay, even.

Then I watched a video on how to make sleeves fit while spinning a bit: 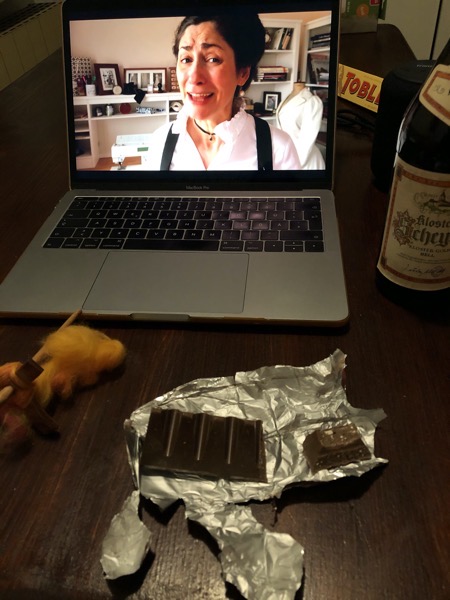 And then I procrastinated about the dishes and de-calcifying the kettle for an hour or two. I finally got around to doing everything way to late and went to bed after eleven. That’s always fun.

Since today is Friday there will be all the teaching all afternoon and all the cleaning all morning with hopefully a break in between and some time to prepare the afternoon’s teaching.

And in the evening a new episode of ‚Picard‘. I’m really looking forward to that.