I did wake up early again and again I did not do my morning routine. Unless you count going online right away as a routine. I guess by now it is.

Made breakfast at 7.20, tried to find out whether I have a Skype account or not and to create a new one and failed. I started finishing my husband’s sweater but didn’t actually finish the finishing. Talked to my husband. Knitted: 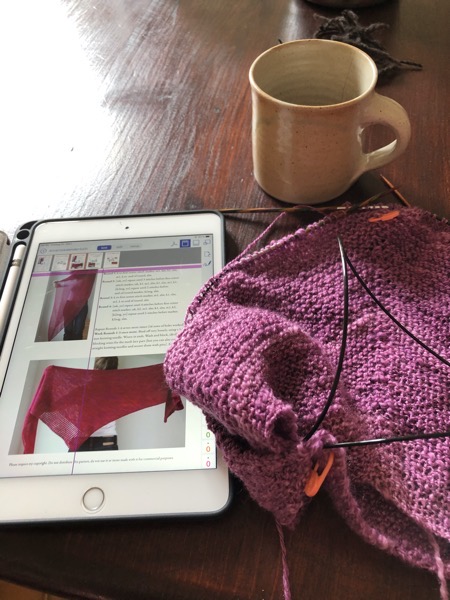 That’s a handspun Viajante by Martina Behm. I made another one in 2014. I know which year that was because I remember knitting that one when in the hospital for my inner ear infection and sudden hearing loss. Part of that old Viajante was knitted with the yarn held in my right hand instead of my usual left because of the infusion port (Is that the right word? I’m too lazy to look it up.) on the back of my left hand. I guess now the Viajante in progress will forever be the coronavirus project.

The yarn is wonderful, nice and soft.

Then my husband went for a run and I started the daily dance of brushing teeth, doing dishes, sorting recycling and such. Then I started the weekly cleaning and ran out of time just after vacuuming the annex. I waited for my husband to return home. I probably should have used that time to vacuum the rest of the house and clean the washbasins and toilets but my husband doesn’t like it when he comes home in need of a shower and I’m busy zooming through the house like a ball in a pinball machine.

So we made pizza. And I vacuumed most of the old part of the house. And we made salad. Behold: 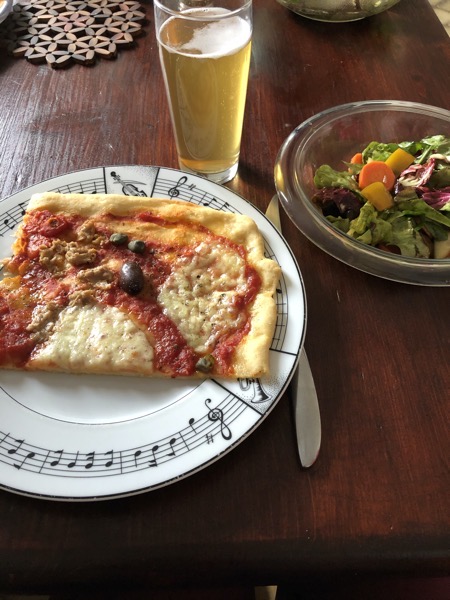 Then I wrote some emails to students, including an email telling a student’s mother how to help him learn the next piece and another giving another mother of a student links to things to prepare for that day’s lesson.

Then I taught my first student of the day (always 1.5 meters of distance, everybody washing hands and everything wiped down) who told me that Bavaria had declared a harder curfew. There are a few more shops closed and people are only allowed outside for grocery shopping, work and necessary things. Fortunately we’re still allowed to go for walks and exercise outside but only alone or in groups of people who live in the same household.

So, no more students in our house. Which I’m rather relieved about. I think this is the right thing to do. It also feels weird and makes me a little anxious because of lack of income.

Then I taught another student and then I had my very first video lesson. With my one student that learns both piano and ukulele.

I have to say it went better than expected. We used FaceTime because we both own Apple devices. We both had two devices, one for the video and one for playing songs on Youtube and such. Since her keyboard is in the part of the house with the worst wifi we only did ukulele. That connection was fast enough that we could play together, even.

After pulling out my MIDI keyboard, podcasting microphone and good headphones I ended up just using the iPad for the video part and my laptop over my sound system as playback. One thing I need to do is to move the big clock I have in my studio so I can better see when the lesson is supposed to start and end. I also need to leave about two minutes on each end for transition.

This first lesson was really promising. There are quite a few drawbacks to this methods but it does work and it is definitely much better than not teaching at all. There is more preparation involved and I need to see how it will work with Skype as an alternative but still.

Of course, not all the students will be able to do this. I already know that one family only has spotty wifi at the moment. I did read an article about teaching over speakerphone but I’m not sure I’m up to trying that.

That lesson also showed me how much I’m missing my students. Some I haven’t seen for two weeks already because of the quarantine. And I need to make sure that I’m making music and singing over the next few weeks because the only time I’m really singing these days is during voice lessons. And every time I do sing I remember how much I love it.

After that the boy and I had planned to do bodyweight training but I canceled. I was all hungry and exhausted, my left middle finger apparently decided to have a flare of arthritis or something (it looks like it got trapped in a door but I did nothing unusual to it.

We watched ‚Picard‘, ate leftover pizza and some ice cream, I started writing this post and went to bed.

Today there will be running, the rest of the cleaning, probably prep for the next podcast episode and some more prep for the video teaching thing.

I’m getting all these emails at the moment talking about how much free time we’re all having at the moment. Well, my time wasn’t even free enough to put on my usual makeup for work…

Not that I’m complaining, mind you. And speaking about free time, apparently the boy has been busy with school work and has managed to reduce his backlog. We’ll see how that goes today.