I woke up at 5.20, was wide awake and went online yet again. Bad Susanne. Some time around seven I went into my phone’s settings, set myself a limit for when I can use it and a time limit for social media. I’m still at an hour for that one but that’s apparently better than before. I thought I was much calmed down and free of panic but then I started my usual post on Ravelry with ‚Guten Morgen‘ and it took a while for me to realize that I was posting in an English-speaking forum and what was off with this greeting. So, maybe not that calm.

I did meditate, wrote morning pages and made breakfast. No writing again. Lots of talking with my husband about the coronavirus and how to proceed with our lives. Since I had already gone to the health food store the day before I had an hour of free time which I spent updating my student list, gathering all the student email addresses and learning how to send emails to groups. In between my husband walked in and out because I was sitting there, looking as if I was on social media.

I changed the sheets on my bed, the boy had some things to discuss and then we made lunch: 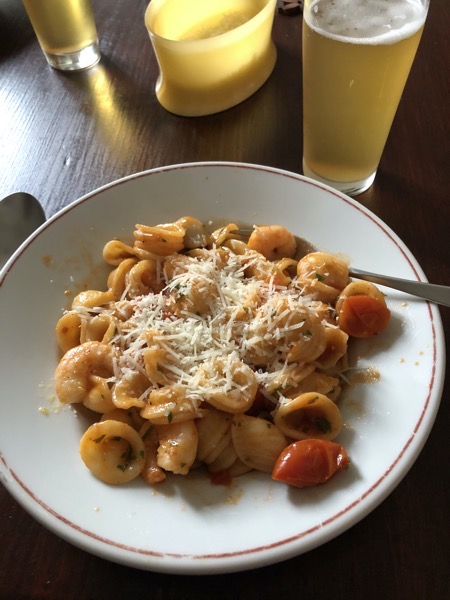 My first student canceled, more talking and then I hung up a load of laundry, did the dishes and finally put away most of the clothes piled high in the master bedroom. There are still two piles, one of clothes that need mending and another one with clothes I want to cut into rags.

I taught a student and talked to her about may moving lessons online. I washed my hands thoroughly before and after the lesson, kept about 1.5 meters distance and cleaned everything we touched. I found that it is surprisingly hard to teach piano at that distance because I can’t really see the sheet music and even seeing the student’s fingers is a little hard. But well, it is what it is.

Then another short break where the boy wanted to consult me on something and another student.

Afterwards the boy and I did something we haven’t done in months – we did strength training. We used the 20-minute hotel workout by Nerd Fitness. I have to say that we gave up after 15 minutes but still, that was pretty good. Turned out that the boy is pretty fit at the moment, his regimen of 100 pushups and 100 squats each day combined with weekly climbing makes a real difference. Whereas I am in such bad shape that my shoulders are drooping again. But. We finally tried our new pull-up bar: 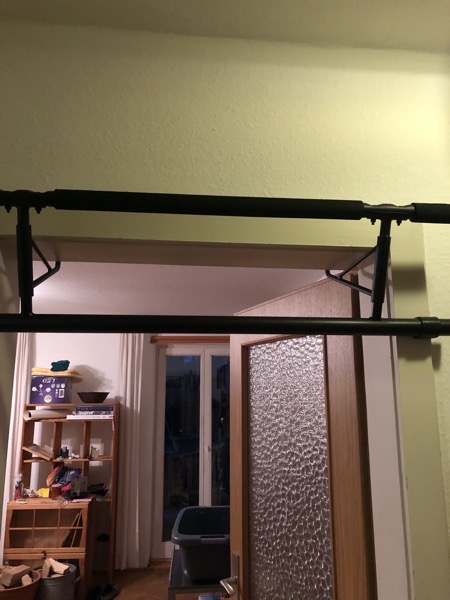 That thing is really good, it appears to be very sturdy, you don’t need to drill holes or something and it is easy to install, use and put away again after. Of course, there is no way I’m doing a real pull-up but the boy actually managed five or so in a row. He was pleasantly surprised saying, „Huh, that was easier than I thought it would be.“ I myself pulled up a chair, stood on that and only put as much weight on my arms as I could.
We both decided that we were doubtful about the reverse crunches and eventually skipped them.

Then there was bread and cheese for dinner and some chocolate truffles while watching an episode of Voyager. I nodded off during that and not because it was a boring episode.

The boy wanted to buy yet another video game, something his friends are playing already and that they can play together, there was a glitch with Paypal that I had to sort out, then I started writing this post and then I turned the lights out a little later than I hoped. Still before ten, though.

Today there will be running, some teaching, more research about giving lessons online and not much more. Dear Cathy whom I know through Ravelry pointed me towards an article about how to teach singing lessons online that actually answered a few of my questions. Which is very good.

I had thought I might order a lot of fabric for my project wardrobe but decided against it in the end. I still have a big pile of mending, fabric for a t-shirt and leggings and at least two sewing projects in progress right here at home. There are a few things I want to make where making muslins would be a rather good idea and I already have muslin fabric here. Judging by the rate I completed my sewing projects in the past those things will be enough to occupy me for the next two years or so, so I guess I’m good.

This is a little weird for all of us. We’ll just have to take each day as it comes, no way around it. I have to say I’m much calmer now.