I think I’m going to go back to daily blogging for the moment. These are interesting times and it might be interesting to have a record. I’m also guessing that a lot of people have more time on their hands now and a need to connect with other people – and as a bonus the journaling might help me process things.

So I woke up at 5.15 after not enough sleep because I was too hyped up to continue sleeping. At least I wasn’t as panicky as the days before, just very determined to get our online teaching going. Then I spent ninety minutes reading all kinds of stuff on the internet (not the best thing to do right away in the morning) but then I managed to meditate for five minutes and write my morning pages for the first time in ages. And I even made breakfast at a reasonable time.

I did not work on my novel, though, I still don’t have the kind of focus I need for that.

After breakfast I decided to go to the health food store. I thought there wouldn’t be a lot of people there shopping but that turned out to be, um, incorrect.

I had gone to the drugstore to get band aids (I found that the only ones we still have are the kind that I’m allergic to), rubber gloves, a brush, batteries and maybe some more toilet paper.

Well. Toilet paper was all out and rubber gloves the same.

At the health food store the lines were winding their way all through the store. Fresh veggies were almost out, the bananas I got were still green and the soap I wanted was out. Likewise canned tomatoes, rice, all pulses and pasta. It was a little insane. And no one really bothered with keeping the distance.

So I walked home with what I had gotten including some unplanned chocolate and went for my walk/run: 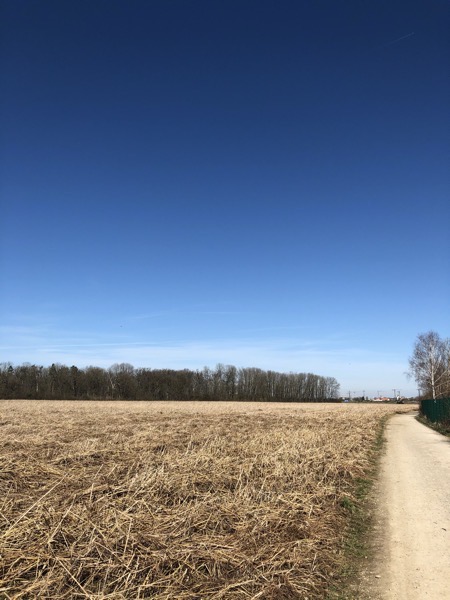 I’m starting to feel better with the running which is good.

I finally made my husband try the sweater on that I had almost finished the other day so I could see the fit: 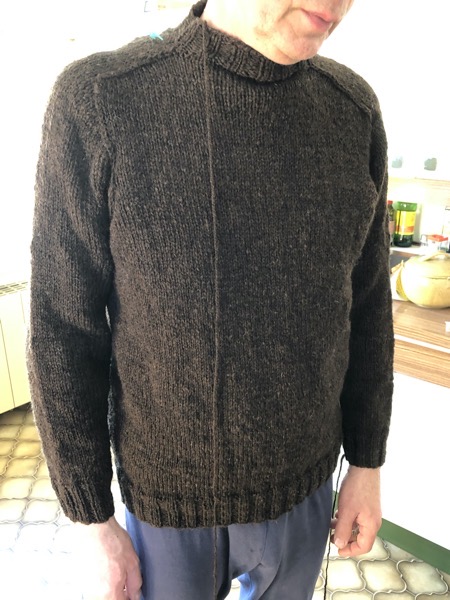 And we had risotto for lunch: 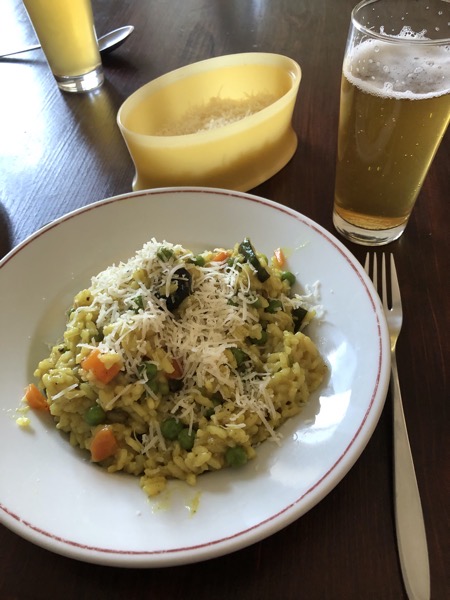 After lunch I took a break, read all about the state of emergency that was declared in Bavaria today and then I proceeded to test some soft- and hardware for remote teaching.

Turned out that Zoom while pretty nice for me was way too complicated to install and use for both my husband and my son. The boy was fine with the installing and such but even he had a lot of questions about setting it up. And we couldn’t even get it to install on my husband’s computer.

My first three students canceled, the fourth one just didn’t show and the next one canceled again. So we had a total of two students show up today, one for each of us. I’m torn, on the one hand not meeting people is a very good thing at the moment, on the other having one student at a time here is way less dangerous than going to the supermarket. We kept at least 1.5 meters distance between us and the students, had everyone wash their hands thoroughly upon entering and cleaned everything anybody had touched between students. I’m sure that’s way better than touching shopping cart handles and standing in line with dozens of people.

After that I did some more research for remote teaching, installed Skype and waited for the boy to come downstairs so that we could watch Star Trek. I gave up after half an hour and had something to eat and a beer.

Today there will be more checking out of remote teaching possibilities, maybe a student, some knitting and possibly some strength training. The boy keeps saying, „I really need to use the pull-up bar,“ maybe today’s the day.