Yeah, I’m still not feeling well. I went to the ENT doctor on Monday and he agreed that yes, this was laryngitis. I was advised to rest my voice by which he meant no talking at all. And don’t even contemplate singing! (By the way, whispering is much worse if you’re hoarse than talking mostly regular.

I did not do any exercise that whole week, I did not write – part from 360 words on Monday – no prep for the upcoming party/performance, no nothing. Basically I sat on the kitchen bench, coughing and crocheting and reading. I did watch a few more sewing videos on YouTube.

On Wednesday it became clear that I was getting worse instead of better so I tried the antibiotics the ENT had prescribed and it does seem to work. I’m getting better but definitely not good.

Me losing my voice was hard because of the teaching. As someone who is self-emplyed I didn’t really want to cancel all my students. So I went into survival mode and spent every minute I didn’t really need to do anything specific just sitting around 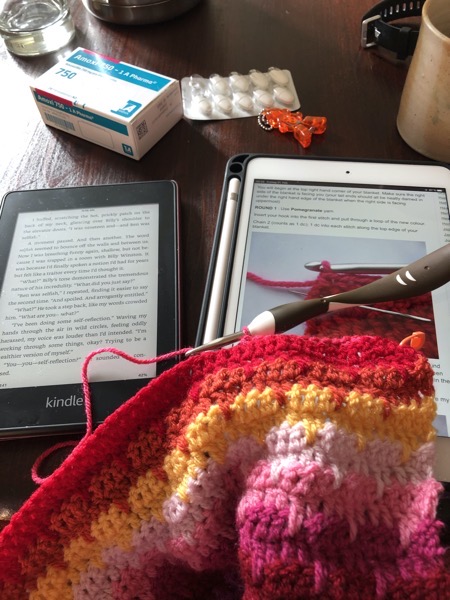 So. This upcoming week there will be carnival breaks but I’ll be teaching three days anyway, to make up for the two days I skipped when we went to Salzburg. And then there will be the massive preparation for the concert/party thing on the weekend with house guests and everything.

And this will be it for this update. I can already say that there will be no podcast this week. Laryngitis and recording a podcast don’t mesh. On top of that I can almost guarantee that the next review will be late.

And then it will be time for another month. A fresh new start.