It feels like I mostly sat around eating and reading and not getting anything done. Plus, I didn’t sleep enough. Not the bestest week

I wrote all of 1,900 words. Instead of doing two sets of pomodoros daily I ended up doing one on all of three days. Nothing to write home about.

On the other side there was lots and lots of reading. I finished three massive novels and a short story. Read my way through books three through five of the Winston-Brothers series by Penny Read. I’m halfway through book six already. Only 1 1/2 more to go.

There was some running. Two bad days and one good one. I did prevail. On Monday I started late, cut the run short and only walked on my way back: 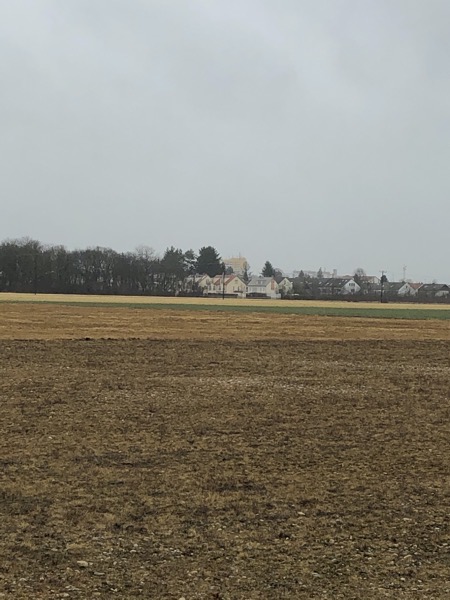 Wednesday was a little better but still, I didn’t feel it: 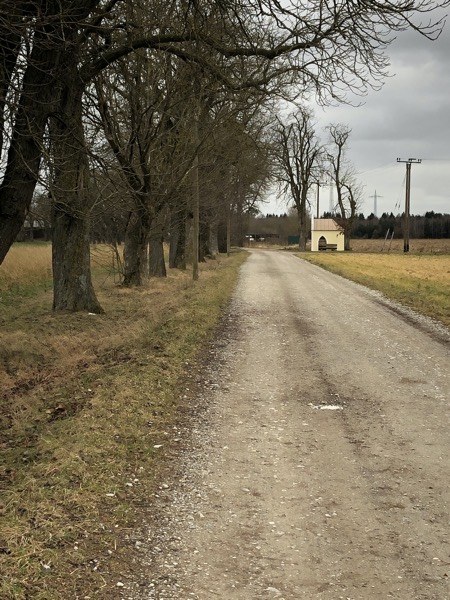 Saturday I was highly motivated and fed up with my nonsense so things went much better: 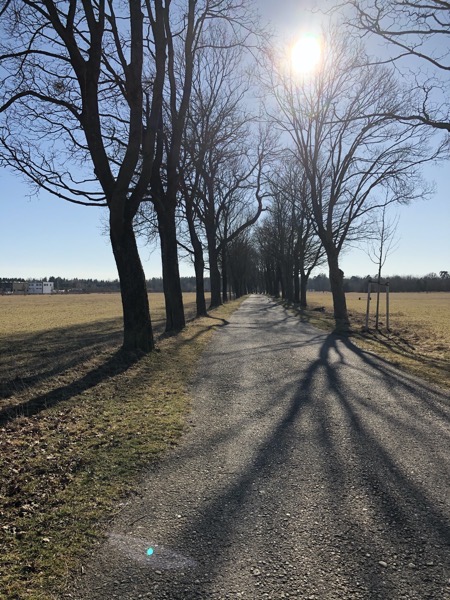 There was absolutely no strength training, yoga or stretching. I do try to stretch more in everyday life and that does make a difference. So, no achy knees for the most time.

Not quite as much as the weeks before, several students were sick and one or two canceled for other reasons. Still, it felt like a lot.

I felt low on energy all week, hence the eating of all the sweets. I also didn’t sleep enough and stupidly stayed up way too late most nights. I also might be fighting a cold but I’m not sure it might be allergies instead. Basically I felt like crawling back into bed all week.

We are still eating mostly vegetarian. Apart from the pizza on Sunday: 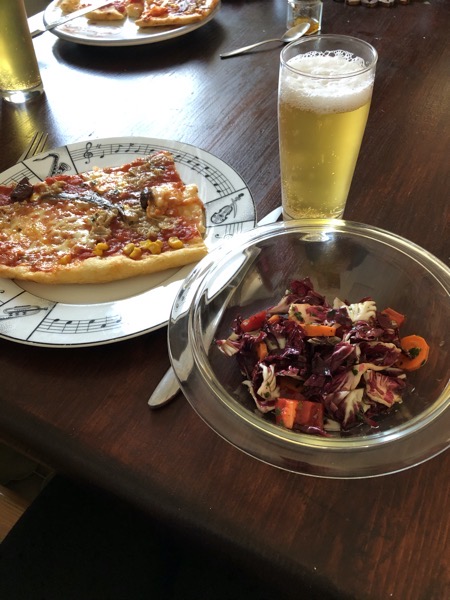 We had a lot of pulses because my husband is afraid we don’t get enough protein. There was actual tofu: 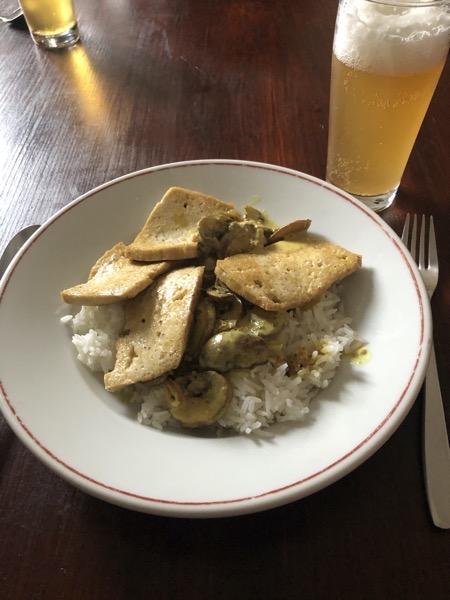 And cabbage with falafel thingies on the side: 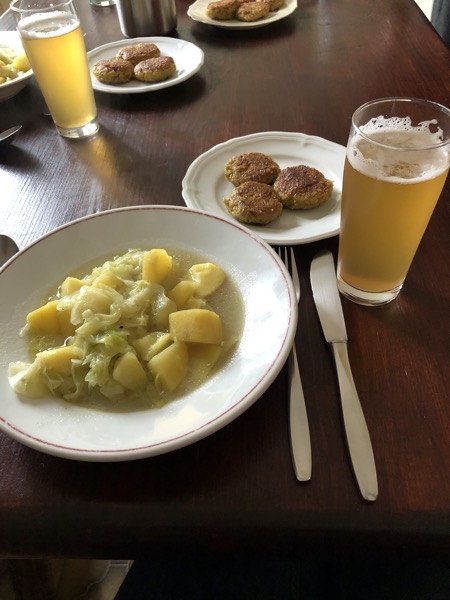 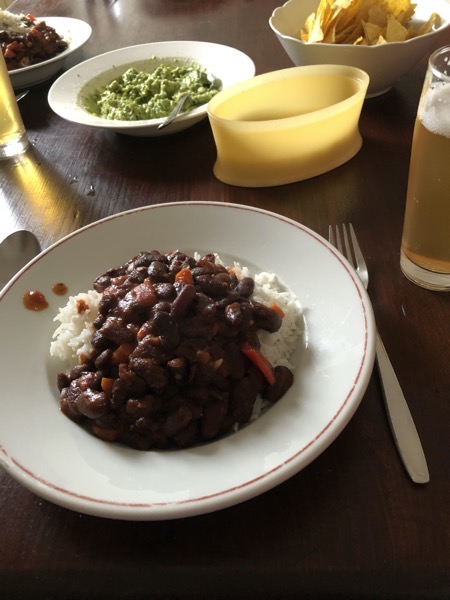 And more beans with pasta: 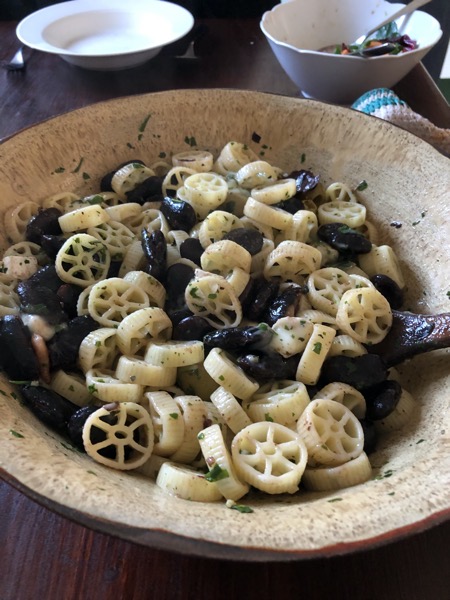 There were also homemade gnocchi but there doesn’t seem to be a picture.

I did not practice at all and there were several things that got rescheduled daily. On Friday I didn’t clean because first I didn’t feel like starting and then I talked to my mother-in-law and then it was too late.

Saturday I was full of energy and a little anger at myself and did some more stuff. Since the boy went to the theater in the evening I watched a bunch of videos on Youtube about sewing while doing crochet myself: 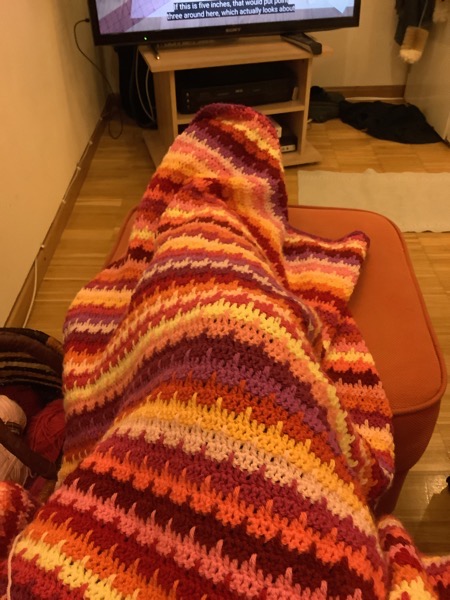 The blanket is getting bigger. On Sunday I recorded the podcast and the boy and my husband painted a bass drum skin with the logo of his old band from 1974. They spent the whole afternoon on it, talking and listening to music.

My husband and I got new duvets and I’m very happy with it after the second night.

The week is already exciting before it started properly because we have a storm warning so severe that there will be no school. No idea what that will mean for teaching. For the students who decide not to come I will probably try to reschedule. We’ll see. So no running today.

Three more weeks until the performance. I need to get practicing and planning.