I know the week was full and at times hectic but right now it really doesn’t feel like it. Maybe because of an extremely leisurely weekend. My poor to-do-list feels thoroughly neglected.

I tried to write as much as I could which apparently meant for about twenty minutes per day. I wrote on five days for one pomodoro a day apart from Wednesday where I did two. That came down to 3,944 words that week which amounted to my best week in January yet. Still, I did fall short of my self-imposed goal by about 4,000 words

I am still liking the story, I still have no idea what will happen next. I did try to plan out the last few scenes, was rather happy about them and then promptly veered off. As one does.

Lots of reading. I keep making my way through Penny Reid’s books, finished the very last book in the „Knitting in the City“-series, the one with all the extras in, on Monday and went on to buy the first book in the Winston Brothers series. Finished that one on Sunday and started book two in that series right away. I am sadly neglecting my massive TBR pile in favor of the new and shiny. So far I am enjoying the books big time. I did keep myself from just buying the whole series in one fell swoop but I might have picked up another one or two. One was on sale some time ago and then I bought what I thought was book two but in fact is book seven. The books can be read out of order but I don’t want to. So I won’t.

There was some running but not a lot. The weather was rather mild all in all. This was Monday: 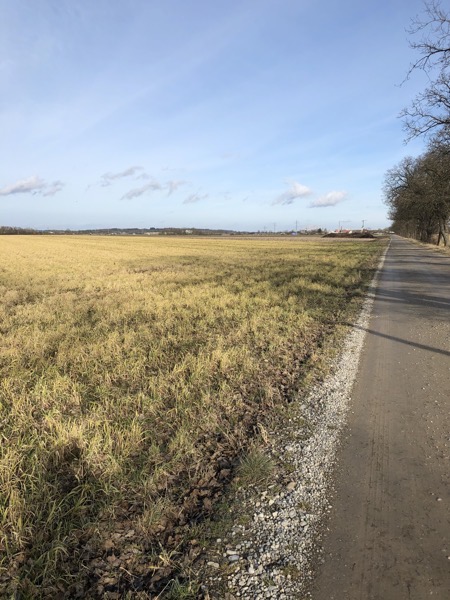 Wednesday I had to shovel snow in the morning but then it was mostly gone later: 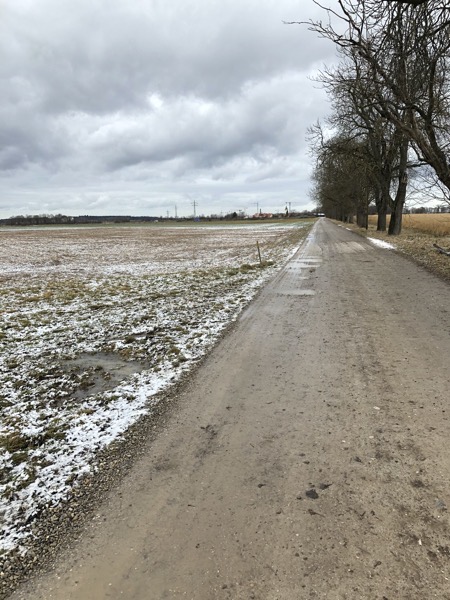 And on Saturday I felt so lazy that I cut my run short and walked most of the way: 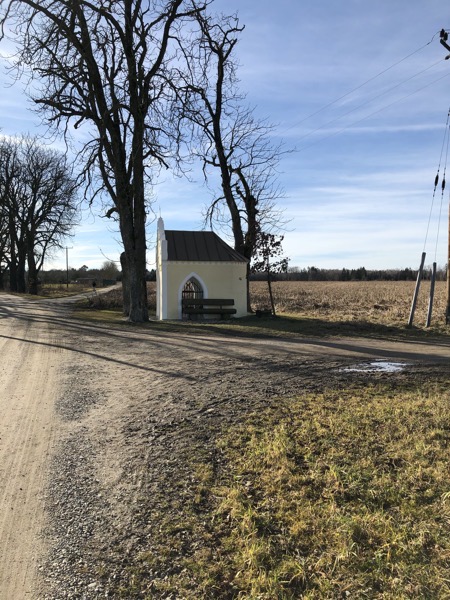 Strength training, stretching and yoga didn’t happen. Mostly because of my teaching schedule but also because of the same laziness on Sunday. I hope that I will get back to that soon, though.

There was a lot of teaching but also quite a few canceled lessons because of students calling in sick. Things seem to be settling down again which is good.

While so many people were sick and sniffly I did remain unaffected. I did have a bit of a sniffle in the middle of the week but that felt more like allergies to me. My husband reported blooming willow, maybe that was it. My knees are doing well apart from a bit of stiffness in the morning but I can live with that.

I had an unexpected rehearsal for the end of February performance on Friday after a full day of teaching. That went unexpectedly well even though I wasn’t really prepared. There will be several bands and for this one I’ll be doing backing vocals.It’s all Rolling Stones, Doors and Lenard Skynyrd songs so not that hard to learn. Playing with those guys, all of whom could be my sons (apart from my husband) was more fun than I had expected. This is a rather low-stake thing so I just enjoyed myself.

The boy and I watched both the new ‚Doctor Who‘-episode on Saturday. This was my favorite this season with the Judoon and one of my very favorite characters returning. Can’t wait to see what will happen next. The new ‚Picard‘ episode was also excellent. I really like what they are doing with the series.

The boy had a pretty hectic week with tests and papers to write and presentations to prepare for. Plus, he went climbing again on Friday and spent all of Sunday with friends. I’d say he is in bad need of a few days off and some extra sleep. I’m very happy about the new printer, by the way, because it’s making printing all those papers and handouts a joy.

This was our first week of mostly vegetarian eating, something that is somewhat tricky with the fructose-intolerance. There were lots of pulses and cheese…

Black beans, rice and sausage that was still in the fridge: 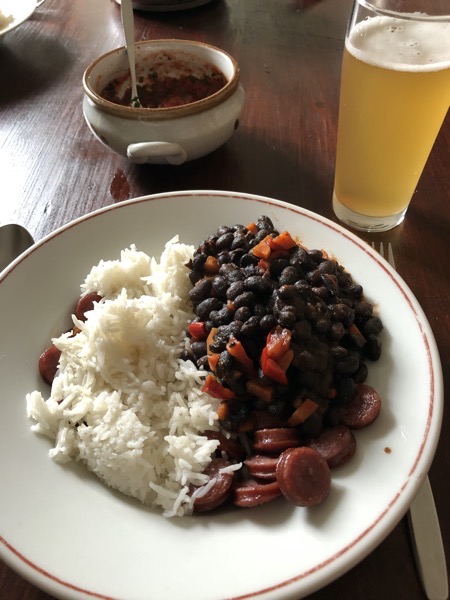 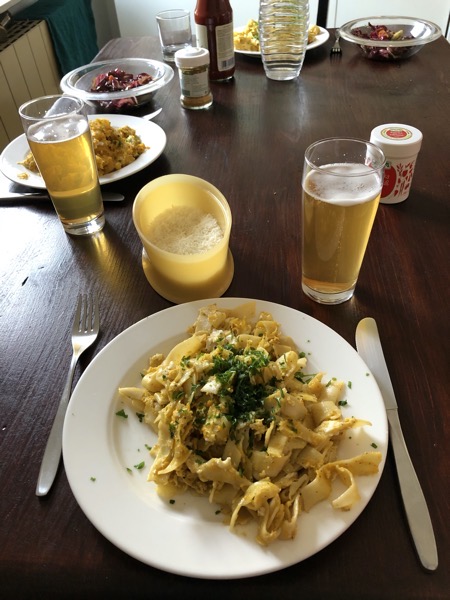 Falafel thingies bought frozen, peas and potatoes on Friday when the boy’s vegetarian friend came along for lunch: 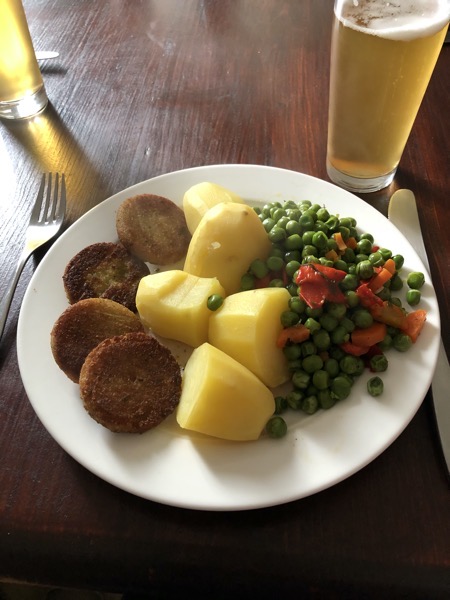 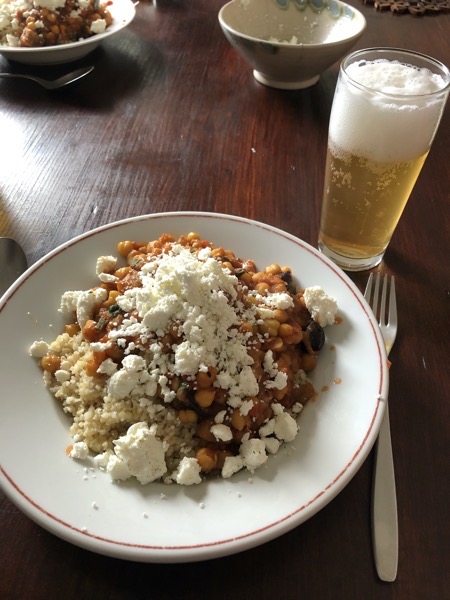 On Sunday my husband had a friend over, they went for a walk and out for dinner while I indulged in potato chips and chocolate and spend the evening watching Youtube videos on the big TV while working on my crochet blanket: 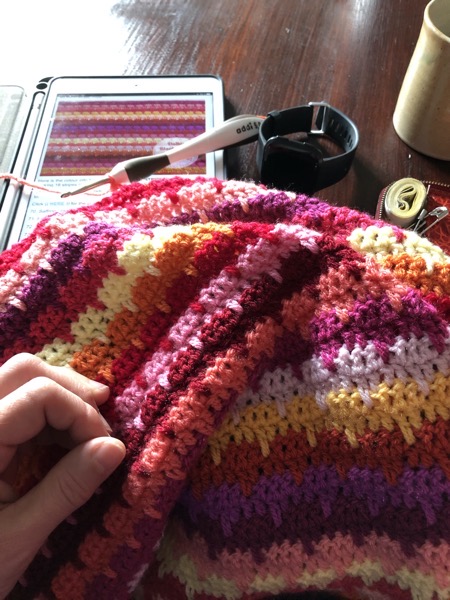 So far it looks to be just regular craziness. I’ll be teaching until 7.30 for three days in a row and I hope I can remember that at that point I need sleep more than food. I did pretty well with that last week, got more sleep and lost a pound of weight so that’s good.

There will be another weekend that’s mostly empty, though I want to record the next podcast episode. It’s funny, at the moment the schedule is so spread out that it’s all podcast all the time. I record on Sunday and the episode gets published the Friday after so I’m constantly doing something on the podcast.

All my crafting time goes into the blanket at the moment but I am constantly scheming and planning which is great fun.

I made my list of things I’d like to accomplish in February and it is rather long. With the performance at the end of the month I’m sure there will be no space for boredom at all.