Yeah, seems I am having less time than expected, so while there is a lot to talk about I only have about twenty minutes to write this. I’ll make it brief for a change, I guess. The last two weekends have been rather busy.

There was way less writing than I would have liked but it was not surprising with the travel and the practicing for the performance at the end of February. I should buckle down like crazy to reach my January goal but right now I have mostly given up.

I finished reading „Elastic Habits“ by Stephen Guise. I did like it but found it about twice as long as necessary. I don’t think I will try his method. I’m sure it has merit but I’m not sure yet. I started reading „Indistractable“ by Nir Eyal. I’m only a few pages in but I’m really liking it so far. I’ve been thinking about the fact that I don’t really need a smartphone to distract myself, I’ve been able to do that just sitting there by myself for decades before the internet and smartphones came along and this is the first book addressing that issue. I’m having high hopes for this.

I’m almost finished with the „Knitting in the City“-series. I’m currently making my way through the book of extra stuff that’s called „Neanderthal seeks extra Yarn“. It’s not as compelling as the full novels but I’m enjoying it nonetheless. Next I’m not sure if I want to dive into the „Fettered“-series by Lila Moon or rather the next Penny Reid-series. Something with beards, I believe.

Well, with traveling to Salzburg there was naturally less exercise but I was okay with that because we walked and walked between 12,000 steps on Saturday and 22,500 steps on Tuesday. I’d say that totally counts as exercise. I went running on Wednesday: 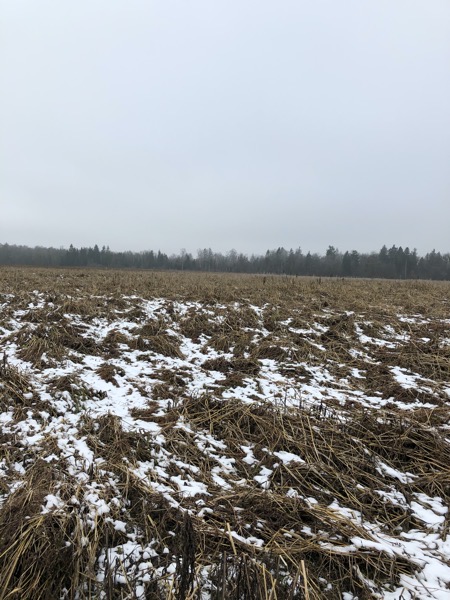 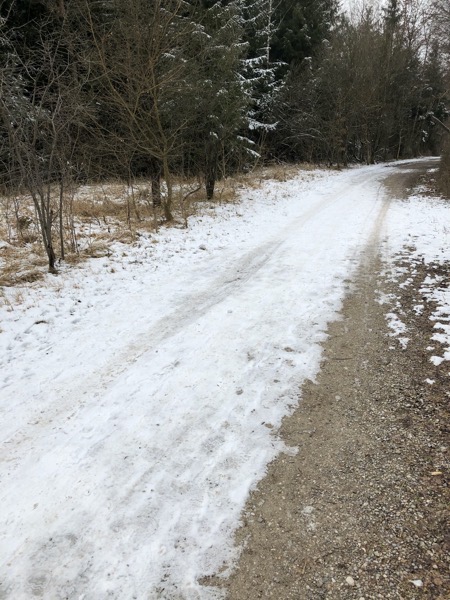 And on Saturday last week. I made those runs pretty easy: 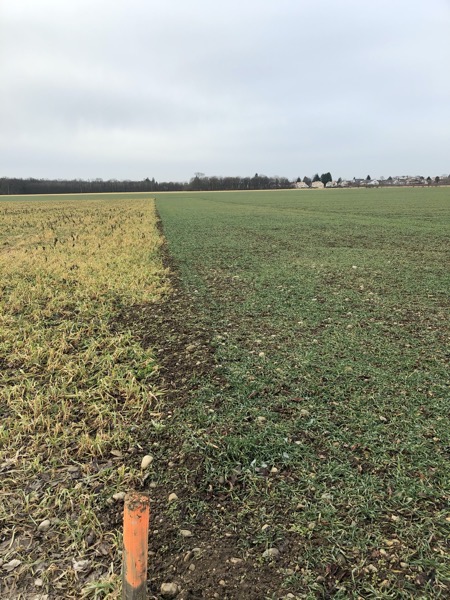 There was less teaching, of course, what with us frolicking around in Austria. The three days I taught last week were totally kicking my ass, though.

Things continue to be fine. All the walking seems to have done my knees good, oddly enough. I managed not to catch the cold that about two thirds of my students have. The boy was sounding a bit hoarse and stuffed as well.

Our trip to Salzburg was wonderful. Spending four days in the same room was less stressful than I would have thought. As usual we were traveling well together. We walked everywhere, ate a lot of great food and looked at the landscape and some art. We started our trip with some döner in Munich before stepping on a train. In Salzburg we walked to our bed & breakfast and then went in search of food. We found cutlets: 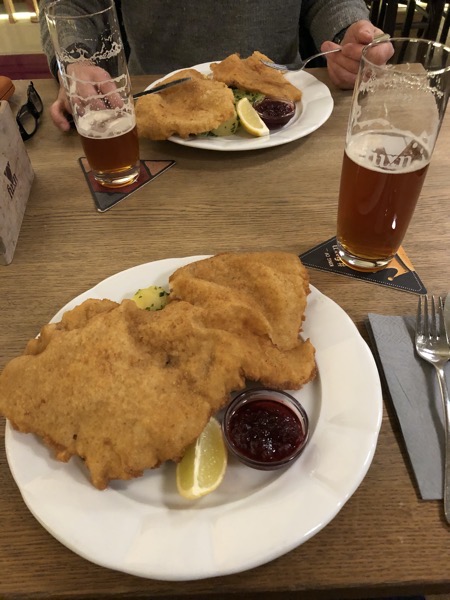 The potatoes are underneath. The next day the weather was rather gray, wet and cold. My husband had eaten something that didn’t agree with him, most likely the tsatsiki from the day before and some pickled veggies at the same meal. So we were off after a late start, looked at Mozart’s birth place and the house he lived in from the outside and then went up the hill to the museum for modern art. 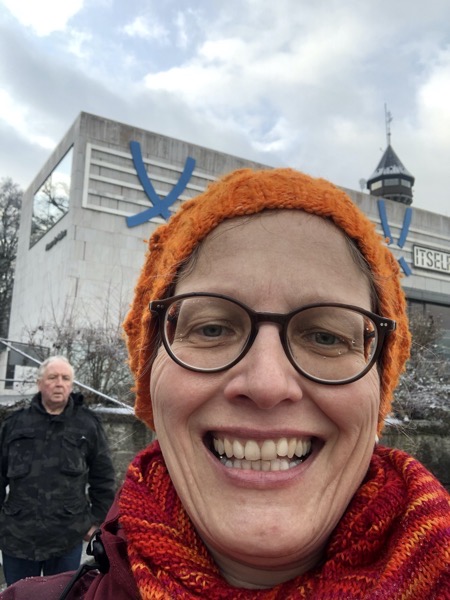 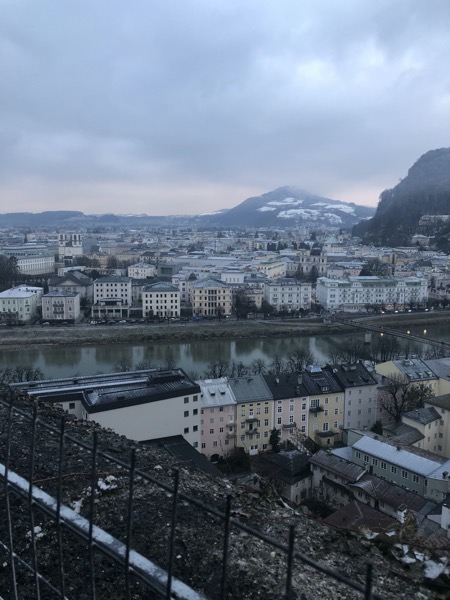 We had burgers for lunch that day: 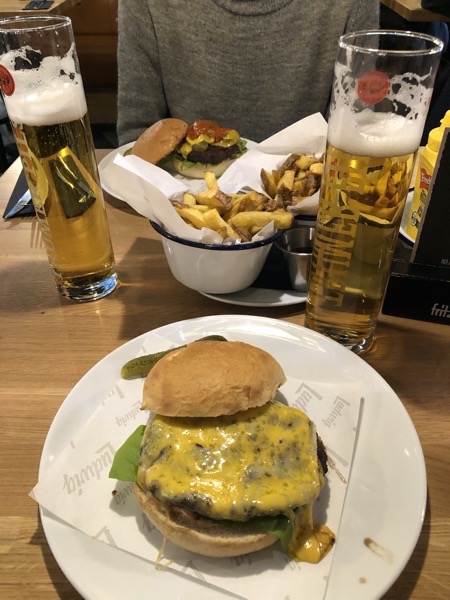 After the museum we walked around some more, then bought some sandwiches and beer and spent the evening in our room reading: 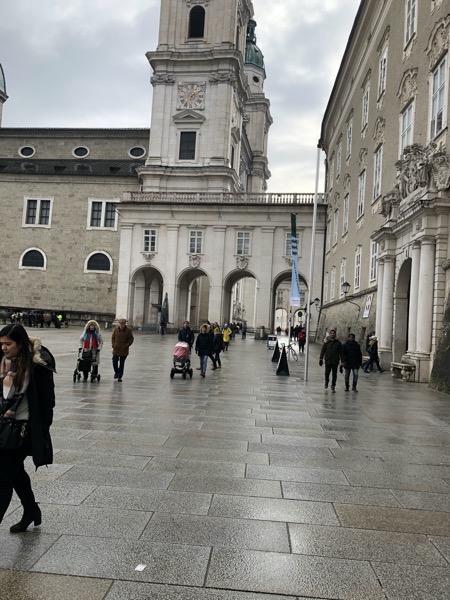 The next day was my husband’s actual birthday. We spent most of the day walking around again, this time to the Salzburg castle. We also got some original Mozartkugels, the best I have ever had in my life. We bought sandwiches (and beer) at the supermarket and walked all the way up to the castle. We did look at almost everything, visited two museums and had lunch in a rather damp space in the castle: 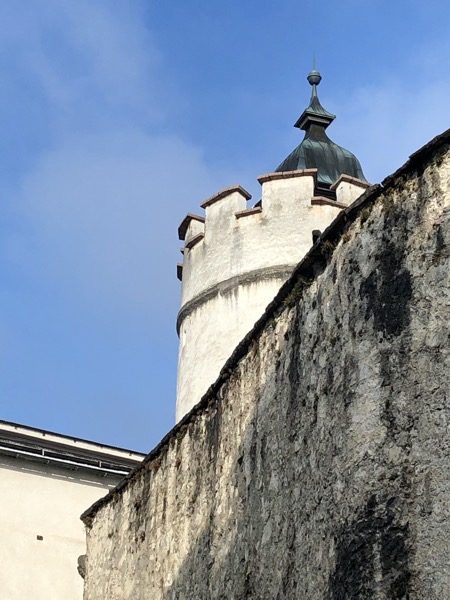 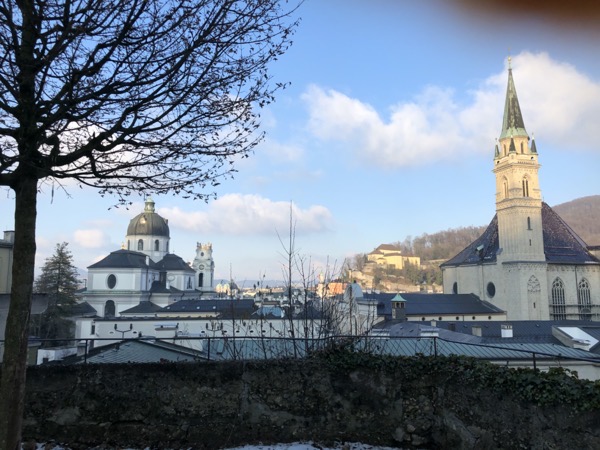 Then we met a friend of my husband at his drumming school so he could drive us to Kapuzinerhof  for a rather nice birthday dinner. First we had a glass of prosecco, 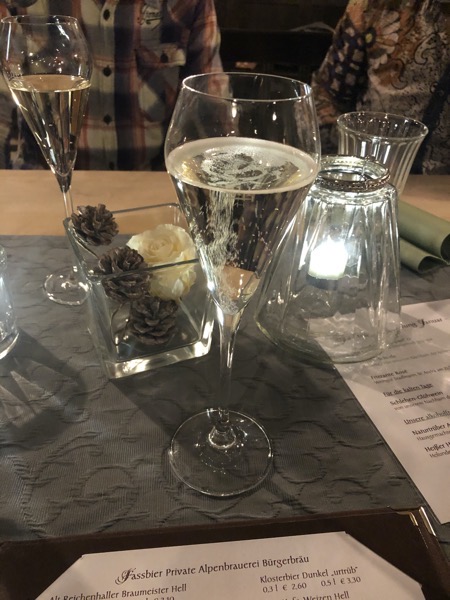 then there was mushroom soup: 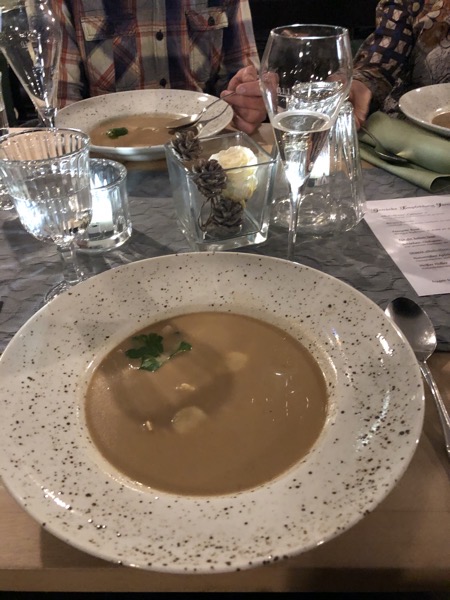 And a dessert of wild berry and marzipan sorbet: 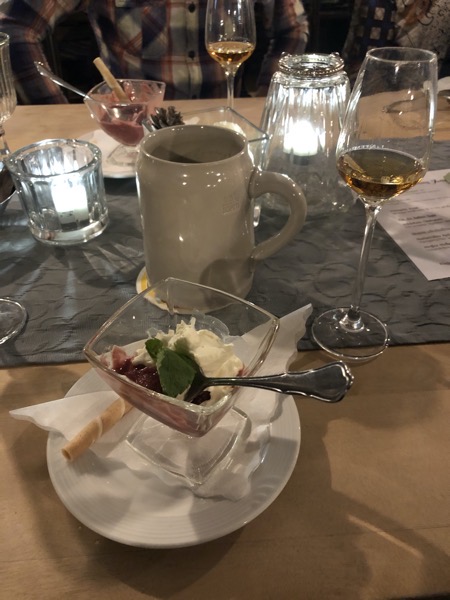 Sorry, I totally forgot to take a picture of the dessert before eating half of it. There was marvelous dark beer that they brew in house as well. And I learned that they are no longer allowed to serve the beer in steins unless you specifically ask for it because EU law says you need to be able to see if there is enough beer in the glass. Since the stein is opaque you have to trust the restaurant not to underserve you.

We had a great evening, talking and eating and then we took the train back to Salzburg.

The next day was our last day there. We had breakfast, then packed and first walked to the train station to put our backpacks into a locker. Then we turned around and went all the way to the Kapuzinerberg, walked all the way up and all around the defense wall. The paths were mostly mud and I sometimes had a bit of trouble navigating them because I’m unreasonably afraid of slipping and falling but I still made it all the way around. 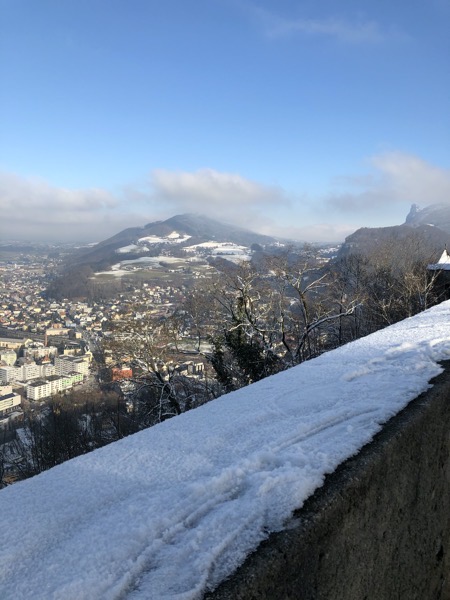 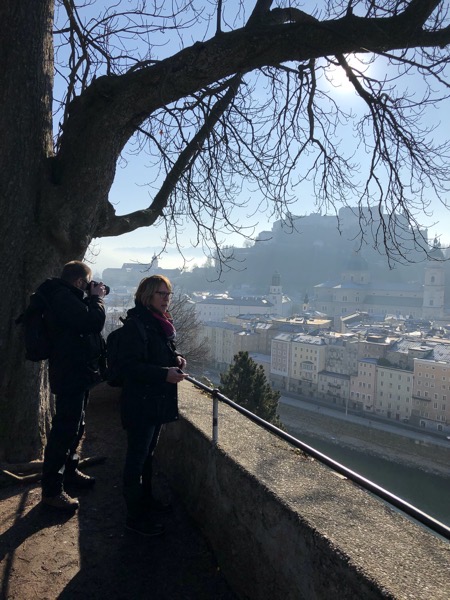 I didn’t take many photos on the rough parts of the way. We did make it down again eventually and then set out to find a yarn shop. There was one called „Wool and Coffee“ and I hoped that we could have something for lunch there as well. So we walked all the way through Salzburg to the other end, found the yarn shop which is charming and nice but no food. My husband admired a pair of socks and I would have loved to buy the yarn but it doesn’t seem to be available anymore: 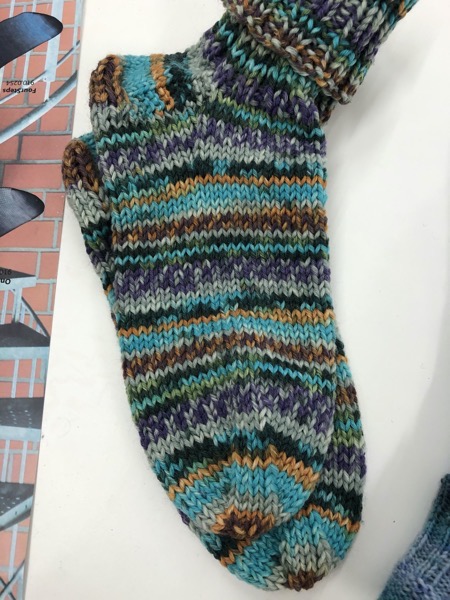 It’s all his favorite colors. I decided that I really need some more sock yarn and found some self-striping: 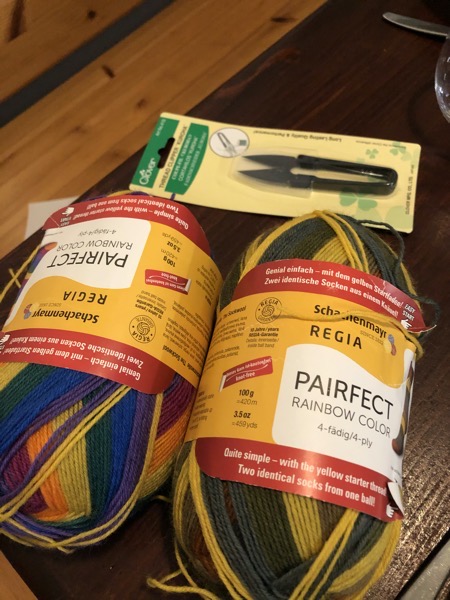 As for the thread cutter, that’s something I’ve been wanting to get for ages. I never did because I own several pairs of scissors totally capable of doing the job without having to spend any money. So I talked about it with my husband and – as expected – he said, „Just get them.“

We made our way back to the train station with only fifteen minutes to spare before the next train home so we decided to eat sandwiches again: 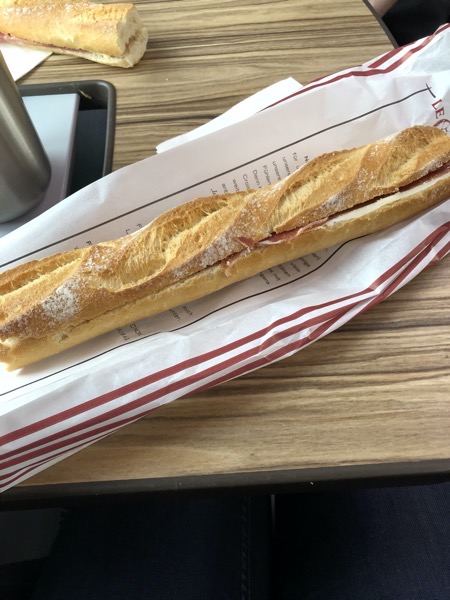 These were pretty good, just plain bread, butter and excellent ham. We also had nuts and some more Mozartkugel, this time the inferior ones from the supermarket. I wanted to try several kinds.

We came back home around six and found that the boy hadn’t managed to do the dishes in time. Apparently, he only did the dishes once in those four days. The kitchen did not look all that inviting. But my husband started doing his cooking magic right away and we had some spaghetti and tomato sauce: 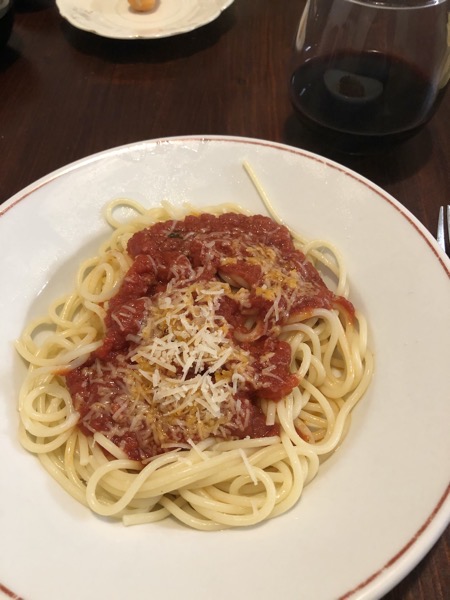 The next day was a little hard with re-entry and running and everything that didn’t get done while we were away and extra-teaching. And then I finally started practicing all those percussion instruments for the Santana gig. I watched a lot of videos about how to play Latin percussion instruments, learned how to play guiro and had to realize that more than a decade of not practicing stick technique had left its mark.

I will have to practice every single day for the next month in order to play those small, seemingly easy instruments.

On Friday the boy and I watched the latest episode of Doctor Who and found it much better than the ones before and on Saturday we watched the first episode of the new Picard series. We liked it and are looking forward to seeing more.

I had planned to record the next podcast episode on Saturday but found that I really needed a day off, or rather almost off because there was still a lot to be done and so I recorded the podcast on Sunday just before having rehearsal with the conga player for the Santana thing.

There will be a lot of practicing with those pesky percussion instruments. I also realized that the other band my husband is playing with might need a background singer. They are doing quite a few Rolling Stones-songs and those always have fabulous singers. So I’ll learn those parts as well.

There will be more writing, I hope, and more strength training (which means more than none, sounds doable). There will be running, and some household stuff. And we are looking into eating less meat, I already read a new cookbook on the weekend. Should have mentioned that under the ‚reading‘-category. It’s called „Vegan Basics“ and looks pretty good.

So. As always a lot of stuff. And I actually stayed up late so I could write this post. Yeah, it did take more than twenty minutes after all.

I hope you all have a great new week ahead, see you.