That week felt both so short that it barely happened and about as long as a month.

Monday was still filled with rehearsals for my husband with guests in the house. By then we were all rather exhausted and a little irritated. My mother-in-law had a sever cold and went to the doctor. The boy accompanied her and earlier that morning he and I went to get the special Christmas brats. 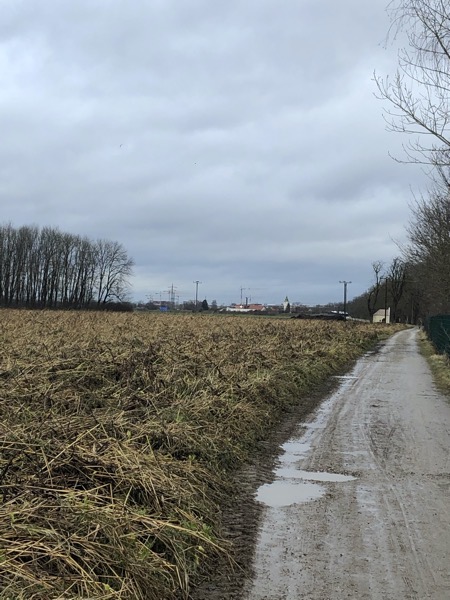 I was very determined to run the whole 5K and failed. Again.

Since my husband was so super-busy we decided to get Chinese for lunch. We don’t usually do that anymore because of all the packaging waste but none of us was in a state where we wanted to go to a restaurant with all the noise and commotion: 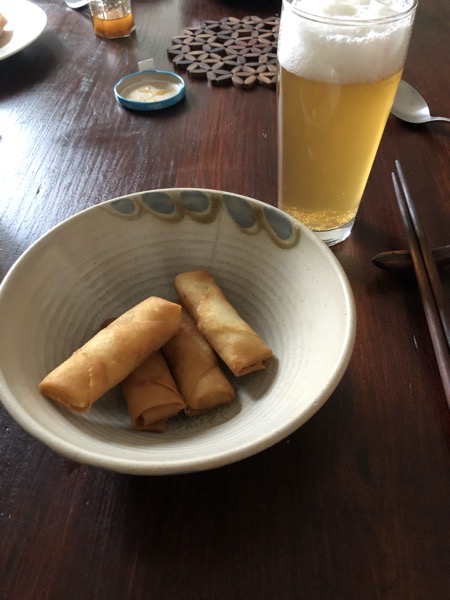 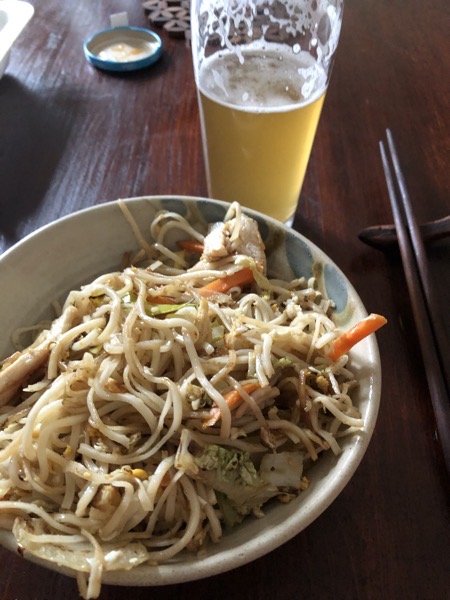 Christmas Eve was nice and low-key. At this point I hadn’t done any writing in days and that made me rather cranky but otherwise things were alright.

This is what happens when my husband decides not to cook for lunch because we’re doing the special Christmas dinner with his mother: 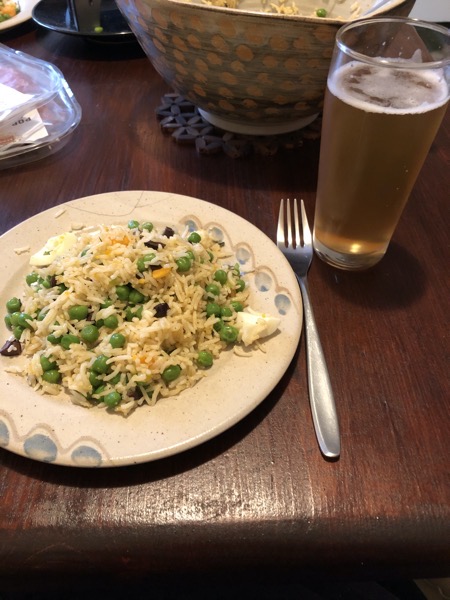 That was also the day I decided I need to learn brush lettering. Of course.

I had already wrapped all the presents in time, we started making Christmas dinner early enough and things went rather smoothly: 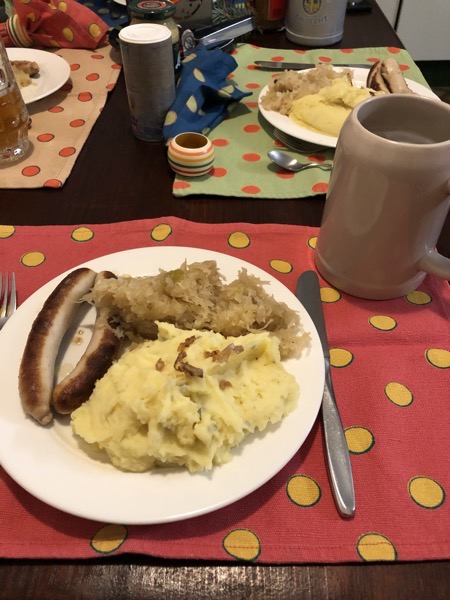 We did open a few presents, my mother sent a package with sweets and ornaments and my sister had books or CDs for all of us. I really love the book I got, „Folk Fashion“ and started reading it right away. Since I’m on a book-buying kick still, it will take me a while to get through, though.

Christmas Day was mostly for lounging about with a little running thrown in. Since my 13K run the week before was pretty much a 13K walk I decided to scale back and re-start the „Bridge to 10K“-program. That involved intervals of running for ten minutes and walking for one. 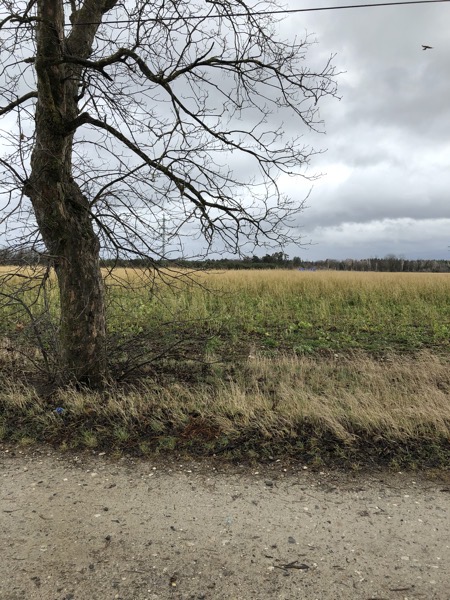 Well. Turns out I can’t run for ten minutes without pause. After more than ten years of ‚running’. That was a little demoralizing.

So I decided to go even further back and re-start „Couch to 10K“. No, giving up is not an option. Going only for walks isn’t one either. I’ll get there. Eventually.

There was homemade pizza for lunch: 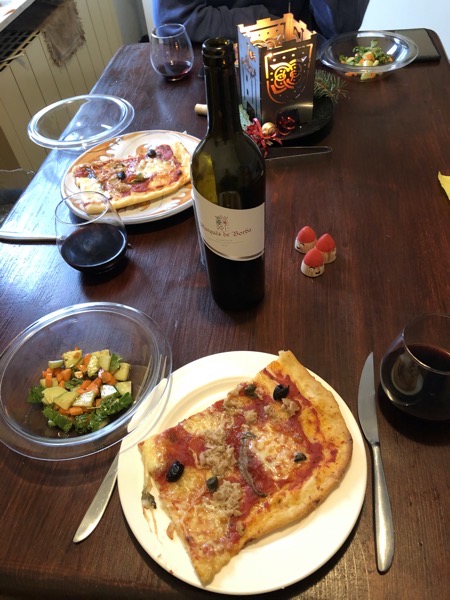 In the afternoon I started thinking about the past year, what happened and what I got done. I couldn’t find any goals for 2019, I guess I didn’t set any because a year is too long anyways. I did write 186,000 words on novels which is pretty good and 53,000 words more than the year before. When I first looked back I totally forgot all the renovation stuff we did. So, all in all a productive year. Not quite as I had wanted it to be, though.

The following day I started reading yet another book about planning and such because I was frantically looking for a method that would work for me and I found „Business Planning for Professional Publishers“ by Leah Cutter. Seems that I finally found someone who is more like me. Huh.

So then I had ideas. Still haven’t finished my thinking about the upcoming year, though. I also found a word tracker I can use for my lofty goal to write 250,000 words in 2020. I am already intimidated by that. Still, now that I have a spreadsheet for it nothing can go wrong. Right?

Thursday mostly vanished into talking with people. A phone call with my mother. Long, convoluted conversations with my husband. Some conflict. (I was so happy about the planning and he thought I wanted him to plan and scheme as well and was angry because he was still in crisis mode after those rehearsals. The boy wanted help with writing thank-you notes.

We did another one of our special holiday meals, goose, red cabbage and dumplings. There was barely any cooking involved, we bought the dumpling dough already made, the cabbage came out of a can and the goos was already seasoned and only had to go into the oven. Weird. But pretty good: 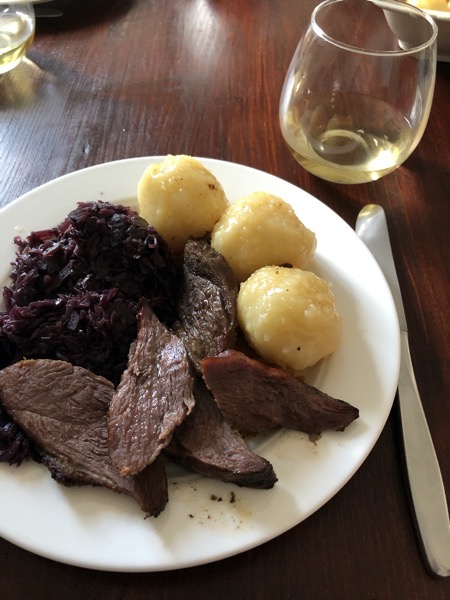 Friday was the first day the shops were open after the holidays so I did all the grocery shopping. Things happened. I did not do the weekly cleaning. We decided we needed comfort food: 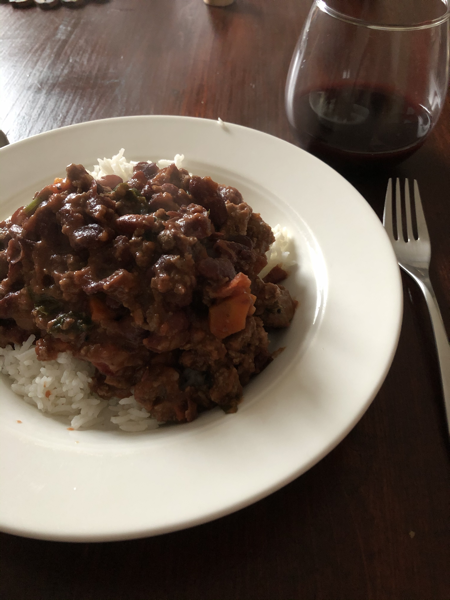 I didn’t write any new words that day but bought formatting software and stared at the novel for 50 minutes.

Saturday I re-started the „Couch to 10K“-program. Four minutes of walking followed by thirty seconds of running for a total of 41 minutes: 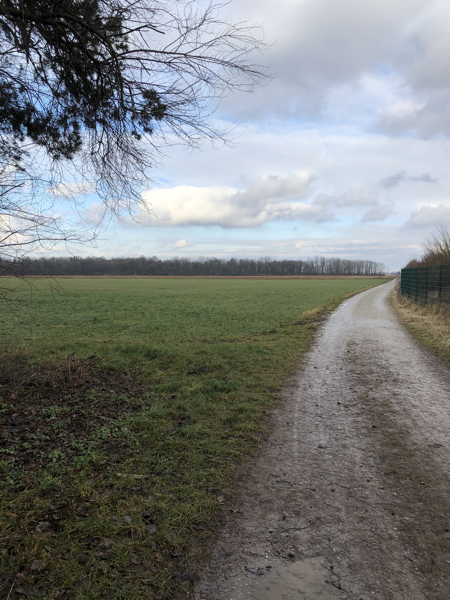 That was not enough running for me by the way. I’ll probably skip week one and two.

There was fish for lunch: 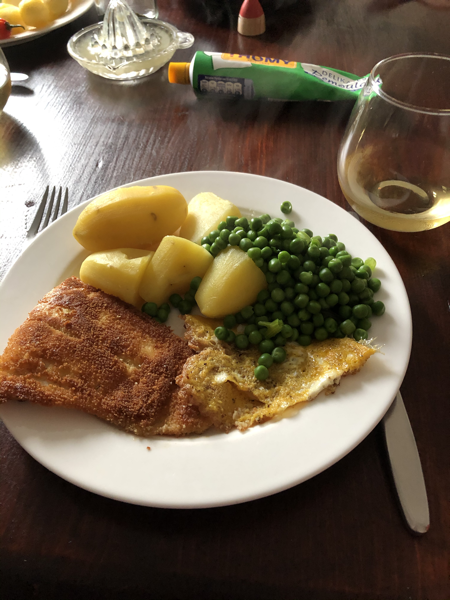 In the afternoon I finally got some rudimentary cleaning in and almost turned the lights out on time. Only the boy really wanted to talk about phonetics for 90 minutes. It was fascinating, only way too late.

And yesterday I didn’t write yet again but did spend quite a bit of time thinking about the novel. I decided to take a day off from everything. Spent an hour making spaetzle from scratch and my husband cooked the rest. Very, very good: 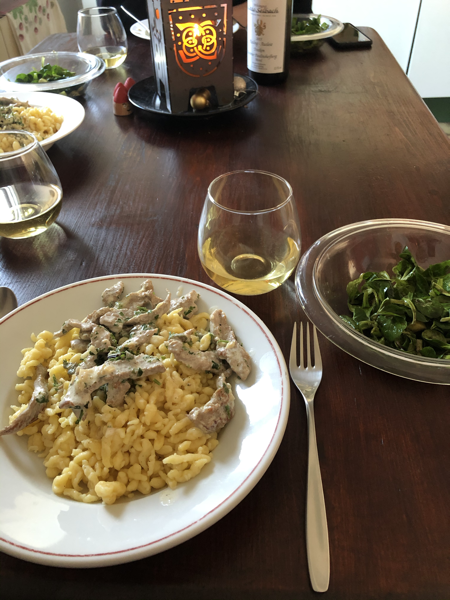 The boy and I watched ‚Discovery‘ every evening and loved it. He went climbing again on Friday. I’m finally getting more sleep. I finished spinning the yarn for my husband’s sweater, still need to ply the last bit: 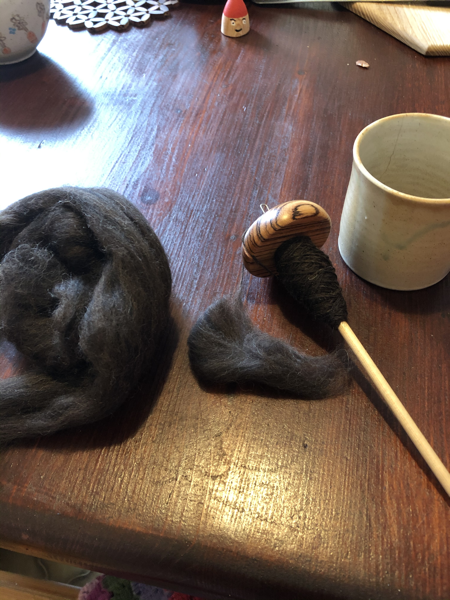 I did read quite a few books mostly holiday themed. I don’t think I’ll get to 150 until tomorrow but that’s alright. 146 will be enough.

And tomorrow it will be the New Year! Fun!