Which is a bit absurd.

Because what I totally forgot to mention in yesterday’s post was that instead of going to bed at a sensible time I stayed up until eleven, finishing „Looking for Group“ (very good and completely un-put-downable for me) and then I was so tired and exhausted that I watched Youtube videos about packing for an hour before going to bed. Yes, that as dumb.

I slept like a log but only for 5 1/2 hours. Which meant I really didn’t want to get up when the alarm went off. I lay around in bed for another 45 minutes without doing any morning routine-things just because I was still super-tired.

Got up too late, made breakfast barely in time but – and that’s the thing I find rather interesting – despite being so tired that it felt like only half my brain was working I was finally able to focus and to write for twenty minutes after the boy left for school.

My theory is that this is similar to the effect when students with ADHD can study better while listening to the radio. As if my brain stops running in circles because it’s half asleep.

Of course we all know by now that the first after a short night is not really the problem. The real problem will be today.

My husband showed up, we did all the usual things, I reached the point knitting my second toe sock where I need to make a decision about how and where to start making individual toes and then we did some housework stuff.

And I wrapped my father’s birthday present, and got the package ready. Went to the post office to mail it, then finally went to the library to renew my card but – the library was closed. I went to the health food store and back home again where my husband was wrestling with a recipe for pasta salad in English. The salad was delicious: 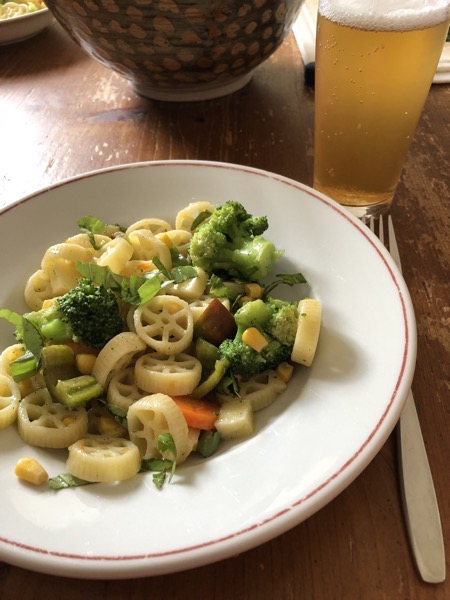 While I was out my mother-in-law had come back from her first cataract surgery. My husband helped her get upstairs but other than that she was fine on her own.

We did the dishes while the boy was still eating lunch, the boy and I talked about the birthday party he’ll attend on the weekend (not my father’s, my parents live too far away to visit them for just two days) and then it was time for teaching.

After teaching the boy and I did some bodyweight training for thirty minutes, I brushed my teeth, went off to bed and spent some time reading. Not until midnight this time.

Today there will be running and teaching and all the usual. Some more writing, I hope.