Hurray! I won’t have to spend today shivering under a blanket!

I woke up at 5.30 shortly before the alarm. Did my whole morning routine up to eating breakfast and for once managed to not dawdle. Yeah! I did not manage to get a second session of writing in but, well, it was a Sunday. In my shiny new schedule there are two days a week off from writing so I’ll be okay. I wanted to have a plan that gave me a reasonable chance of finishing early.

Then my husband had breakfast and told me about his new guitar. He changed the pickups on Thursday and tried them extensively on Saturday. Where I apparently was way too zombified to listen to him, oops.

I did some stretching and then the dishes and such. We made stuffed bell peppers for lunch. Since we started too late we also had a pretty late dinner: 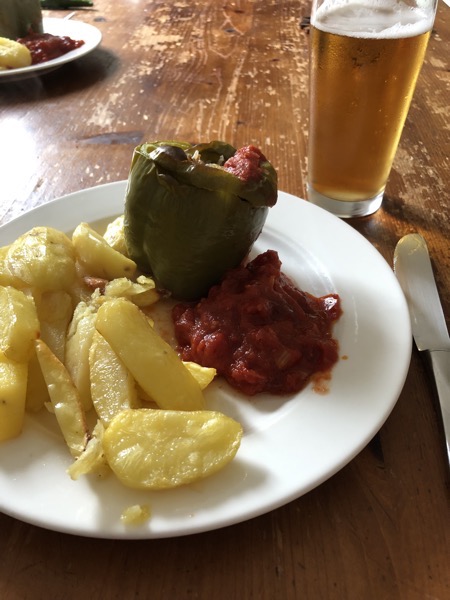 Dishes again and a nice break.

Then my plan was to plan the upcoming week, prepare the next podcast episode, do some laundry, help the boy study for his PE test, help him buy some new shoes and some other stuff. In reality my husband popped into the kitchen while I was planning the week to talk to me about which guitars we have to potentially lend to a new student of mine. And some other stuff.

So I finished the planning and then the boy came downstairs. Helping him study didn’t go well. I tried pulling up some Youtube videos to show him how the swim techniques he had to learn about look in real life but he was more interested in bitching about how dumb the text was so we decided he’d better study on his own.

And then we looked for new shoes for him. He needed a new pair of everyday shoes, a pair of slippers and then he wanted some boots as well. No leather. It was interesting how similar our taste is. And how often the shoes we both liked best were the most expensive. But we also both agreed not to get those.

When we were finished I remembered that the Birkenstocks I’m using as slippers are starting to disintegrate, looked on the website of my favorite barefoot shoe brand for a replacement, saw that the slippers I like were on sale and bought a pair.

All of that took about ninety minutes so there was barely time to hang up the load of laundry my husband had started before it was time for strength training. Second week of getting back to strength training. I did well with the exercising last week, my Fitbit tells me I exercised for a total of 6 hours and 43 minutes all week. Not too shabby.

Then we watched an episode of Star Trek, I started writing this post while the boy took a shower and my husband practiced guitar and then it was time for bed.

Today I want to go running, teach and do all the things. Let’s see what the new week will bring.