Woke up at six and all I wanted was to stay in bed and pull the covers over my head. I didn’t even take my thyroid medication until I was on my way to breakfast ninety minutes later.

I thought about why I had been feeling so bad lately, all paralyzed and frozen and unable to do anything and decided to up my vitamin D. I had only taken half my usual dose since the start of summer because when you’re out and about in the sun you don’t need to take as much.

About an hour after that I was already feeling much better. Might have been the placebo effect but I’ll take it.

After breakfast and reading and then crocheting while my husband had breakfast and was talking guitars I tackled the huge pile of dishes that was started all the way back the day before. Then I cleaned the house, or rather touched most surfaces, helped to make pizza, folded laundry and put it away and hung up a new load.

In between we had lunch: 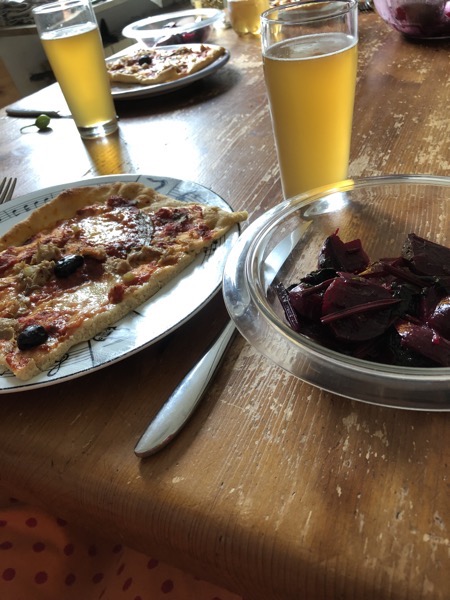 Now, you can’t see it in this photo but that plate has musical notation on it. Also a few really bad drawings of several instruments. The notation has been bugging me for decades and yesterday we started talking about it at the table and I tried singing the notes that were there. Finally I got the small ukulele from the bedroom and played what was there and it became clear that it shows a bastardized version of the German Christmas carol „Oh, Tannenbaum“. There are several notes missing and the last two are too low but that is what whoever designed this plate must have copied. Very badly. The saxophone that is drawn there is totally distorting the time-space-continuum, by the way, because it is folding back on itself in an impossible way.

After that I did another huge pile of dishes, took a little break and the boy and I went out to maybe buy him a new sweatshirt. Apparently my mother-in-law has gotten a few coupons and doesn’t quite know what to do with them. And since the boy is sadly lacking clothes she is always trying to buy him new ones. She wanted to go to the local clothes shop with him and buy him something but he wanted to go with me instead. Well, deep down he wanted to stay home but that was not an option.

So we walked there, looked at the four sweatshirts they had (they boy didn’t want anything knitted and also shares his father’s disdain of zippers in sweatshirts). The one model that might have been okay-ish (thought we were both a little thrown back by the letters S.O.C.D. printed on the hood) only came in sizes L and XL which doesn’t fit him and the rest was really not his style at all.

I had been contemplated getting him a new pair of shoes as well but he declined. So we bought some croissants for next day’s breakfast, a notebook for him for school, some sewing thread, toilet paper, oats and sweets and walked back home.

I read some more, watched Star Trek with the boy (I have to say that both the Voyager and the Deep Space Nine episodes felt like there wasn’t really anything happening.) while eating leftover pizza, did the dishes, started writing this post and went to bed early.

Today there will be running and then we’ll see. Last weekend of summer break.