Woke up at six from the alarm. Took my thyroid meds, meditated a bit and stared at the novel for a short while. Had breakfast while reading „The Unkindest Tide“. Stared at the novel some more and managed to write 100 words. Found that I had forgotten to thaw the pastries that were meant to be husband’s and boy’s breakfast. So they had to eat bread. My husband was rather disappointed when he showed up. (He had assumed that the pastries were just sitting in the kitchen, he hadn’t known that I had put them in the freezer.)

Well, he did survive. I crocheted a bit. He told me stories about Carlos Santana again (he is still reading the autobiography). My husband went out to get alcohol-free beer but the store was closed until noon. So he went to another one. In the rain. After he came back, finally the new guitar arrived. It is whole and beautiful. I should take a picture and show you but I can’t right now.

Then I went out (still raining) to the supermarket. Came back, put some things on the list for next week because I couldn’t get them, helped to make salad.

I thought to myself that it would have been a better idea to close the door between the kitchen and the hallway instead but didn’t say anything.

Five minutes later the alarm went off again. My husband shouted up the stairs, „You better shut the kitchen door!“ To which she replied, „But then there’s just more smoke!”

Well, nothing caught fire at least.

My husband and I had leftover lasagna for lunch: 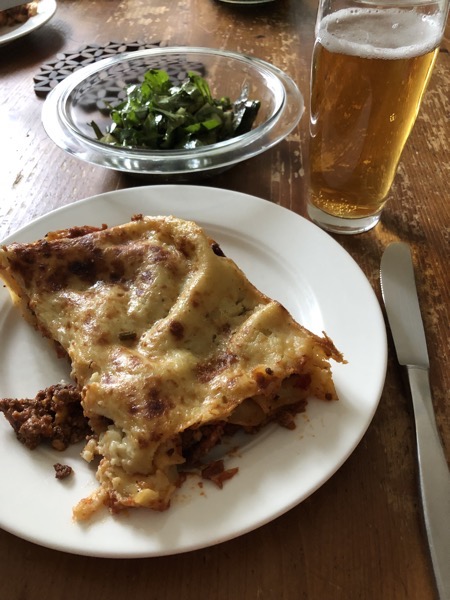 After that I ate some chocolate and read some more.

And then I couldn’t get started again. This is almost a habit by now.

My husband showed up again and we looked at the new guitar. Then we talked about the money from the life insurance and what to do with it. I started researching index funds and savings accounts until my brain felt numb and then we made an executive decision to put most of it in our existing savings accounts. The interest rates are pretty decent and we don’t have to open new accounts.

In the course of the day I had been wondering (again) why my new ebook reader is loosing battery power so fast. Even when I’m not reading and wifi is off. I looked the problem up and it might be the case that’s the problem. Which is brand-new as well and the one produced by Amazon itself. Still. I charged the Kindle, pulled the case off and will watch what happens. Of course, I’ve already had the case for more than 30 days but if it is really the culprit I will contact support anyways.

Then I researched plot shops online because I want to sew more clothes and printing the PDFs at home is just a pain. I then decided which patterns I want printed for now, decided against buying a pants pattern I’m eyeing and got that sorted. Then I looked up how much of the brown jersey I have.

And then I researched daypacks for my husband. His old one is quite a bit older than the boy, it went with us to Brazil in 1999, and is starting to rip. I pre-selected four different backpacks and had him choose one.

And then I did more finances stuff.

And then it was time for watching Star Trek.

At least I have an inkling what is making me so paralyzed. There are so many niggling details to take care of that I can’t focus on the important stuff.

Oh, and today I will go and buy a sweater and maybe a pair of shoes with the boy. And clean the house and change the sheets.