I woke up, started my morning routine and then fizzled out. No writing. Went down the internet rabbit hole and had breakfast rather late. Talked to my husband, crocheted. The Summer Ripple blanket is about halfway done at this point.

I’ve also been thinking about my sewing projects and I might make a dress by hand. Without the machine. The one top that I hadn’t-sewed is holding up great, mostly because of the different thread I used. I don’t think I can use the same kind of thread in my machine but I need to research that further. On second thought there must be a way.

But. Getting the machine out is always such a hurdle for me. On the other hand I am sitting there spending hours on a crochet blanket that I don’t need, just because I can work on it while talking with my husband or watching TV. So I might try sewing a dress by hand as well.

Since we were expecting the new guitar to arrive we went running one after the other. Running was nice at first and way too hot a little later. I don’t like running later in the day. I was pretty good with actually running my running intervals until the next to last one and then I basically just gave up and walked the rest of the way. At the halfway point I was still rather optimistic: 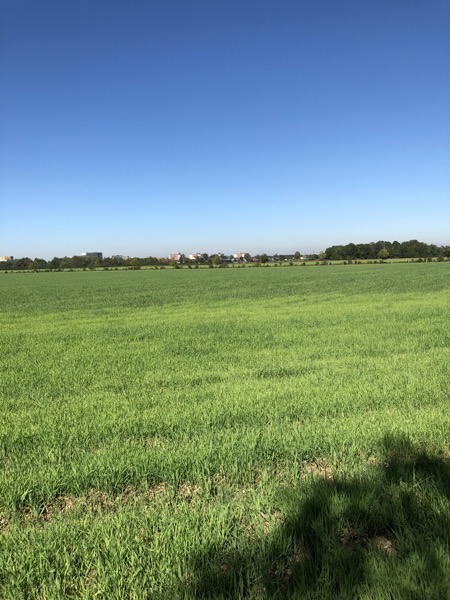 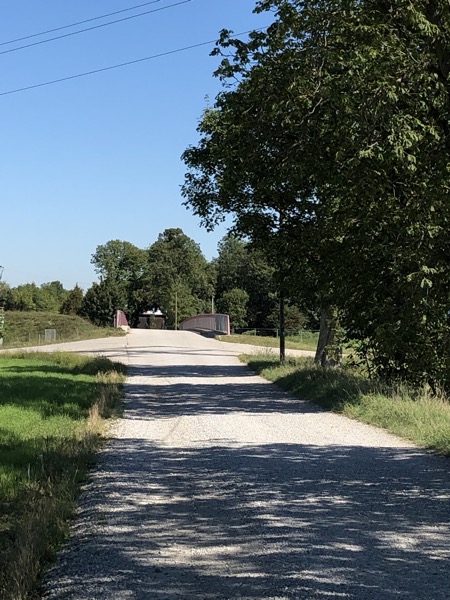 Back home I helped to make lasagna and salad and managed to layer everything wrong. At least according to my husband. I will do some more research on how to do it properly. He wants me to put pasta on the bottom and I’m thinking that that will result in undercooked dough. We had a hot debate (at one point I even scraped the bolognese sauce back out of the dish) and finally came to the conclusion that a) we need to find out if a layer of lasagna on the bottom would result in undercooked pasta and b) have to have enough béchamel sauce for three layers if we start the whole thing with béchamel on the bottom and c) if I start layering lasagna with bolognese as the bottom layer it’s maybe not worth fighting over it.

I think I will do some research and then put a post-it note on the package of lasagna noodles. Otherwise I’ll forget again.

Nevertheless, the lasagna was delicious. Even though my husband insists on putting eggplant in: 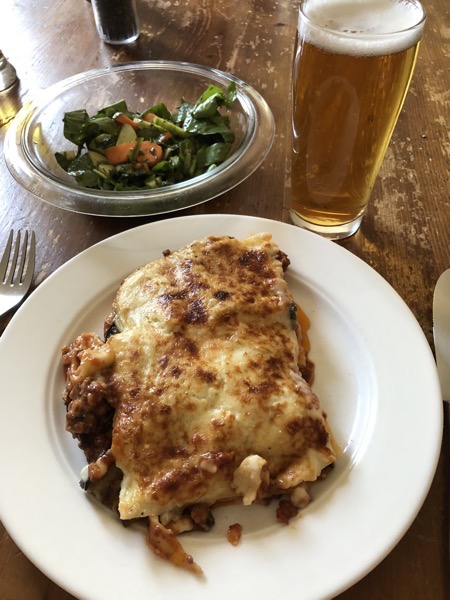 The vegetarian lasagna is not pictured.

Then I did not do the dishes because I had to teach early.

I taught the student who usually brings her baby daughter with her to class but yesterday she had a friend looking after the baby. Teaching is a little easier without a baby present. I don’t mind much, though. Then a little break during which I found out that the guitar wouldn’t arrive that day after all. It was still stuck in transit. Then another student who is a great joy. She is about my age and started to teach herself piano three months ago and is full of curiosity and questions and enthusiasm. She also is playing rather good for the time she’s been doing it.

Then another short break and then another student, this one a kindergartener who has been trying piano lessons for a few months now and is starting regular lessons now. He was playing well also.

My husband and the boy meanwhile went out together. My husband has been sad that they don’t spend time together anymore and after a bit of needling (it’s not like the teenager will come up to him and ask to do something together; if left to his own he’d spend weeks in his room without coming out at all) my husband planned a walk together. They changed the plan twice but it was basically walking to the train station to get ice cream, then to the edge of town to see what happened to the farm that had burned the day before and then maybe a little further to the small lake there. And then back in time for dinner.

Then the boy and I watched some Star Trek, I wrote a few words and went to bed early again.

Today there will be grocery shopping and then I’ll get all the things done that I didn’t get done until now. Or something.