Woke up from the alarm, meditated, read „The Daily Stoic“, looked something up on the internet and suddenly it was time to have breakfast. Did some research after that. (I don’t even remember about what.)

My husband showed up, we talked, I crocheted, the boy got up somewhat late, I did my weekly stretching thing with Youtube but felt so low on energy that I cut it short and only did a few knee exercises instead.

Then my mother sent me a message, complaining that I hadn’t called her in weeks. Fair enough, so I called her, we talked until the phone battery gave out. (I need to put new batteries for the phone on the grocery list but that means I need to find out which kind I need first.)

I finally did the breakfast dishes and cleaned the washbasin and toilet in the old part of the house. We cooked. Lunch was super-tasty: 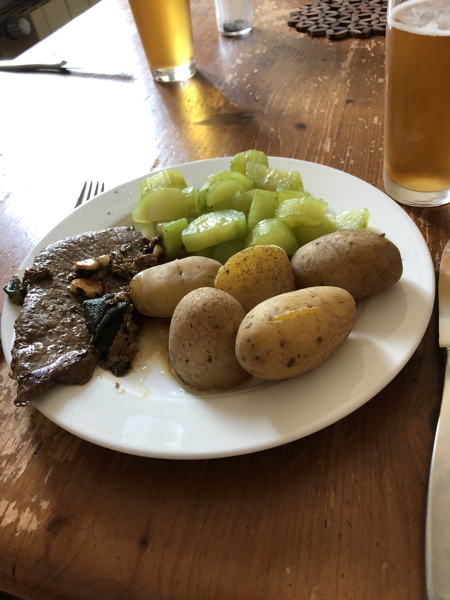 I procrastinated like crazy but finally hung up a load of laundry, did more dishes, did the planning for September and specifically for next week and wrote the monthly Patreon newsletter. Phew.

Funny, how those projects that sound perfectly reasonable seem to blow up when you break them down into small steps and look for a time to schedule them on your calendar.

Meanwhile my husband and the boy were harvesting the potatoes. Fortunately the promised thunderstorms remained elsewhere because that took much longer than they thought.

The wristband for my Fitbit started breaking so I ordered a new one.

And then it was time for watching Star Trek, some journaling and then off to bed.

Today there will be running, planning the teaching website revamp, all the writing and some more stuff. I do have a rather long to do-list.