Okay, I have to admit there was one thing I didn’t get around to. But I was close. And there was still time for a lot of reading and thinking.

Woke up at six (not enough sleep yet again), lounged about, rolled out of bed at 7.30 and promptly noticed that I had to wait with breakfast for thirty more minutes because I had forgotten to take my thyroid medication.

But. Breakfast was eaten, books were read and a cardigan sleeve was knitted. The boy showed up. There were dishes and more reading and preparing the podcast (badly) and pizza-making and then lunch: 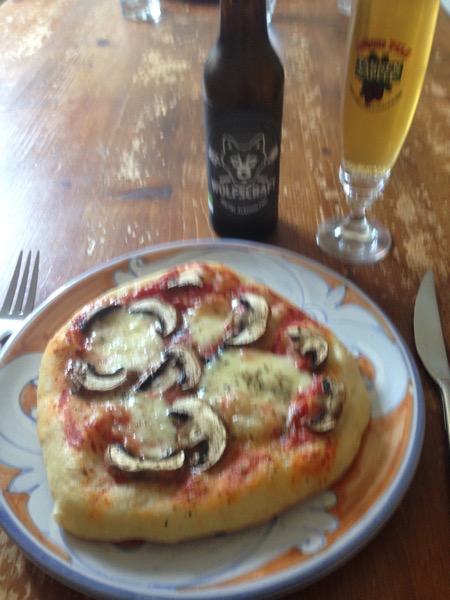 A bit small this time. Then I recorded the podcast. I have to warn you, it is a bit disorganized. But I tried a new placement for the microphone and that worked rather well.

I cleaned the house, I did some laundry, I started getting the podcast ready and got an email that my husband would be returning that same night. We all had thought he’d be back this afternoon. Surprise!

The boy and I watched some Star Trek. I waited for my husband. He came home around ten. We talked and I went to bed at midnight. He and his friend decided to return a day early because of bad weather and predicted heavy traffic.

Today there will be lots of talking and some walking/running and I’ll get the podcast up. Other than that I’ll just see what happens.

Woke up at six, well-rested after enough sleep. Phew.

Still, didn’t do much all day. Or at least it felt like I didn’t do much. I started a load of laundry after breakfast, looked after the garden in a rudimentary way, went grocery shopping and at noon the boy and I went to the train station and took a train to Munich. 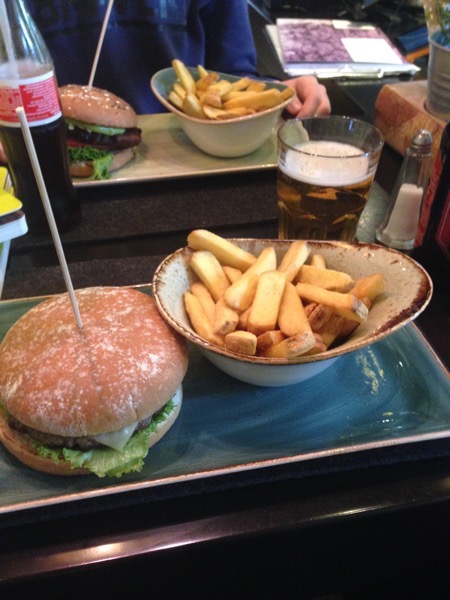 The place looked pretty hip to me. The burgers were great but the music was too loud and there weren’t enough waiters so we had to wait a long time for the bill. Which made me antsy.

We hopped on the train again and went to the art supply store. On our way we saw a Ferris wheel: 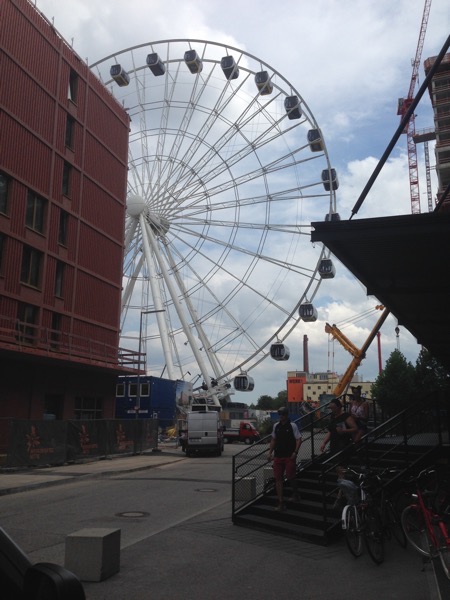 This was a part of Munich I had never been to before but then it had been all industrial space back when I lived there. The art supply store was just the right size with all kinds of pencils and pens and paper and such. Unfortunately, they did not have the notebook I wanted but the boy spent some of his money on stuff. He also ogled some really nice brush pens that we both deemed too expensive. (A friend of his has some, though.)

Then we wanted to take a tram to the ethnological museum but there was some kind of trouble, so we walked. Which was nice.

At the museum we found that we arrived one hour before closing time. And we weren’t all that certain about the exhibition anymore. So we walked some more to the city center along the Maximilanstrasse which is where all the big designer names have their shops. The boy was unimpressed by the clothes there. His and my taste are pretty similar, only he did like Hermès. And apparently doesn’t like pin stripes at all.

There was a fun moment when we were making comments about what was in the shop windows, basically saying, „I don’t care for this, and I don’t care for that,“ and then we both broke out in an enthusiastic „Ooh!“. That was a window displaying Montblanc fountain pens.

We walked all the way to the Marienplatz, feet a bit sore, got something to drink, fondled the iPhones in the Apple store because I’ve been thinking about getting a new one in a few months (mine is starting to flag (can a phone flag?)) and wanted to try out the different models for size and feel but they only had the brand-new ones. They look nice but I will certainly not spend that much money on a cell phone.

Since I hadn’t found the notebook I wanted we went into another stationary store where they didn’t have the exact model I wanted either (Leuchtturm 1917, dotted, in the color port red, why yes, I am peculiar – and I have since ordered one online), then we got some chocolate and went back home. The stationary shop did have a display that made me think of my husband, though, so I took a picture: 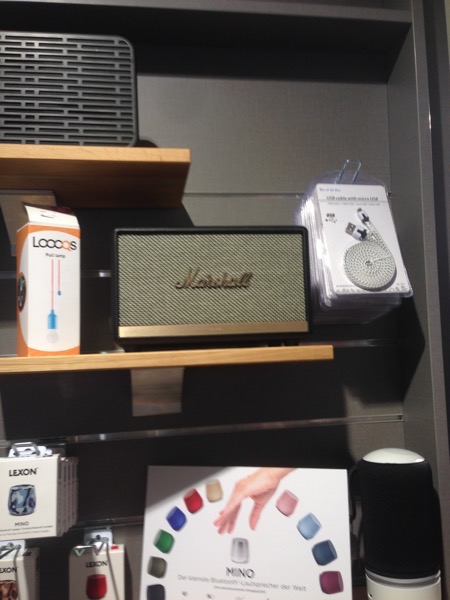 I watered all the plants, we had dinner in front of the TV again, watching two rather good episodes of Star Trek. First we watched the Voyager episode where Kes leaves the ship and Seven of Nine becomes human-ish and then a really nice Deep Space Nine one.

After that I made pizza dough and went to bed a little late.

Today will be a fun-filled Friday, there will be the cleaning, the pizza-making, the knee-exercises, some writing (I hope), the preparing of the podcast and the recording of the podcast. Bonus points for writing the newsletter but I guess that will probably have to wait until tomorrow.

I didn’t quite manage to sleep in but 6.30 was later than usual. It was one of those days where you are longing for bed all day long. And where everything takes longer and moves slower than usual as well.

I lounged in bed, meditated, realized that I had forgotten to read „The Daily Stoic“ for several days in a row and caught up on that. I made breakfast. I read. I read social media, read some more, made tea. The boy was late again but we talked and he helped with the dishes. I looked after the garden and found a bucket to place under the broken sprout. I had opened the glass house when I woke up but closed it again because it was raining hard.

I went walking/running. I am now up to 1 1/2 minutes of running for each 3 1/2 minutes of walking. So far everything is fine. I forgot my bandage with no ill effects. This was the halfway point: 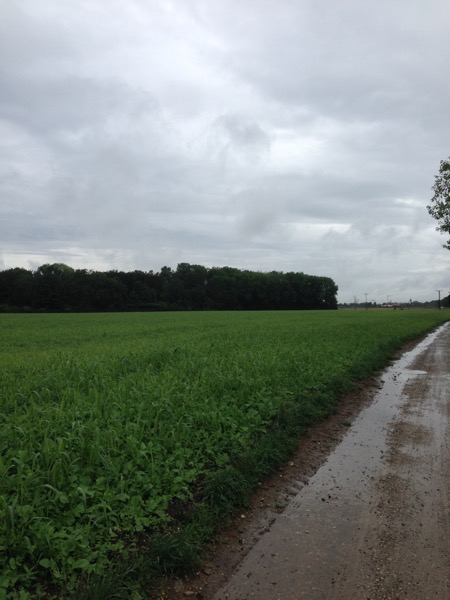 And this is me at the halfway point: 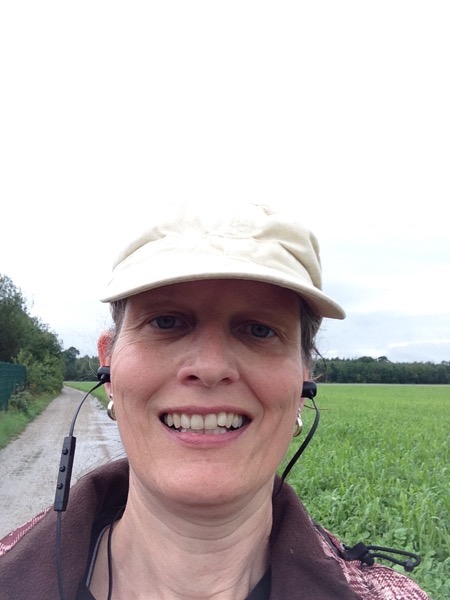 I love the cooler weather. Even with the rain. I was making a kind of fashion statement in my ugly brown windbreaker paired with orange/red-striped leggings.

When I came back I was already too late for making lunch on time. So I informed the boy and took a shower. He then helped me with the cooking. He is rather bad with that because he never does it. It isn’t really his fault, we usually cook when he is in school. I made pasta salad: 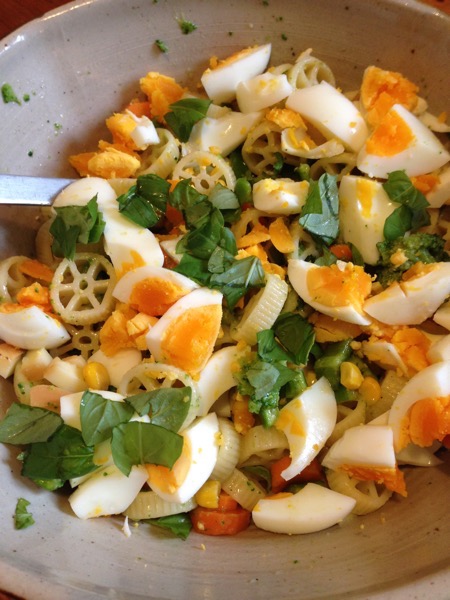 The boy and I did the dishes and made plans for today. We looked up how to get to the burger place and the museum and which ticket to buy and then I read some more. I looked back on July and made plans for August. I updated my bullet journal and made all the habit trackers, calendars and such for the upcoming month.

I wrote a couple of emails, sang and played the piano, started writing this post, did my knee exercises and then watched Star Trek with the boy.

Early to bed at last.

Today I want to go grocery shopping (didn’t get around to it the day before and didn’t want to walk through the rain), then leave around noon and catch a train to Munich. I’m really looking forward to that.