I had turned my alarm off but woke up at 6.30 again. Did manage the new morning routine of taking thyroid medication, reading the „Daily Stoic“, five minutes of meditation, morning pages and 25 minutes of writing and got up at eight. (Yes, there is about twenty minutes of faffing around in there too.)

And that marked the second writing day in a row which means the novel is basically done. Ahem. Or maybe not. I always think that way but of course it doesn’t really work like that.

My husband and I had breakfast almost at the same time. Then I knitted a bit and we talked a little and the boy showed up and by the time the dishes were done it was almost time for the weekly bout of exercise in front of Youtube. I had neglected my knee exercises all week, my knees had started hurting again and so that bout of uncomfortable stretching and isometrics in front of TV came in handy.

Read a bit online and then it was time to make lunch. Which we ate early: 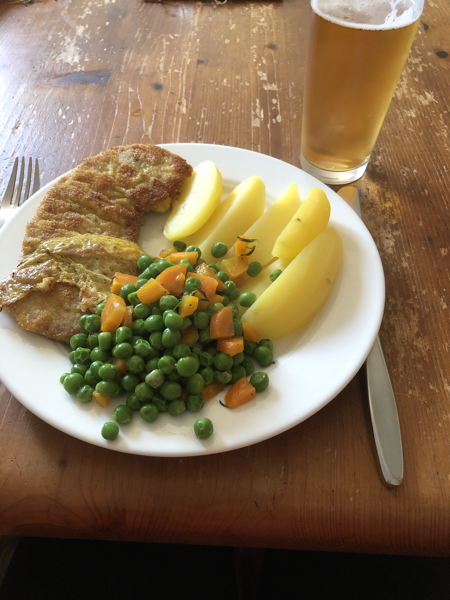 The boy got a new kind of fake meat that I wanted him to try. He thought it tasted pretty much like real meat and deemed it a nice change. We also made plans to rebuild one of the salads we had the day before and looked up different types of beans, as you do.

By then my oomph for the day was mostly gone. I did the dishes, folded laundry, put it away and hung up some more, watched a bit more of the current writing lecture, played around with iPad and pencil, had a snack or two and declared the day over.

We did all meet to watch the film about the Woodstock festival with it being 50 years my husband had decided that the boy needed to learn about it.

And then I went early to bed.

Today there will be running and a lot of rain and my mother-in-law will be back. I am hoping for a third writing day in a row and some more productive things in the afternoon, so stay tuned.