Well, I still haven’t cleaned the bathrooms. I had set the alarm for six but apparently turned that off, turned around and fell asleep again for thirty minutes.

I didn’t let that get in my way, though, and meditated, wrote morning pages and some words on the novel.

I spent quite a bit of time thinking about productivity and systems and my kanban board and I talked to both my husband and the boy about it at length.

So I finished my breakfast when my husband was making his. A little late but alright. Then I knitted a bit on the boy’s new scarf, looked at Gibson guitars with my husband and commiserated with him because the one he would have wanted to buy wasn’t available anymore, helped him decide on another one and then I sat down and ordered some more yarn for yet another crochet blanket that we don’t need. I am really looking forward to it. I had been mulling it over for days now and decided that I really wanted to.

Did the dishes and then went running. I’m now at the point in my 10k-program where I have to run for the same amount of time as I’m walking and while I’m finding that rather hard I actually managed to do it for once. This is the halfway point after 29 minutes: 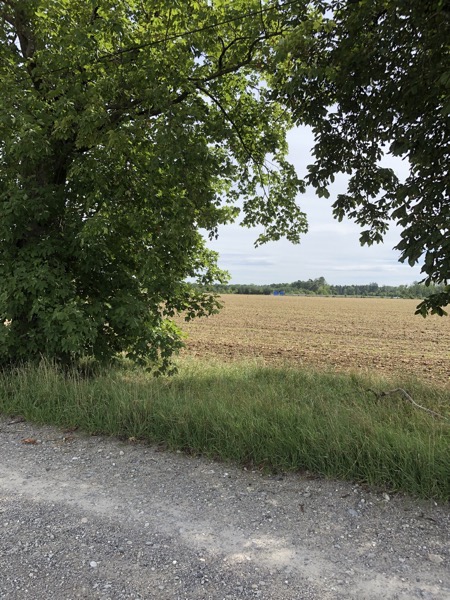 Why yes, that is the exact same tree I took a picture of on Wednesday. Because I had to run and walk for exactly the same amount of time. Next week it will probably be another tree because I’ll be running more.

Then I helped to make lunch and took a shower. Lunch was pretty low-key because we knew we would be eating all the food later in the day: 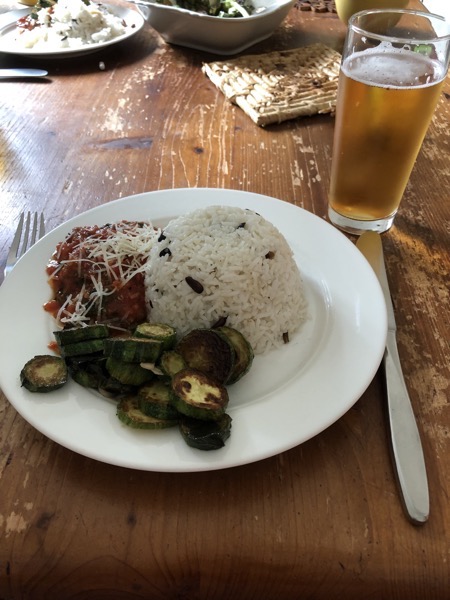 My husband formed that rice just for the picture, by the way, both he and the boy got their rice in shapeless heaps. That is how much my family cherishes you blog readers.

Lunch was very tasty. Afterwards there was only a little time. So I watched a bit more of the writing lecture I bought recently, read a little, did the dishes, put on makeup, packed for an afternoon away and then we rode our bikes for about an hour for a garden party. Well, sort of. There is this tradition of Leberkäs at the house of the couple who founded the society for improvised music that we belong to. It’s at their house and usually rather nice. If we were taking the trains there it would take longer than the bike ride and I find the biking rather fun. (I am still not quite sure how I became a person who goes for a run/walk for an hour in the morning and then enjoys two one-hour bike rides in the afternoon but apparently I am now somewhat sporty and outdoorsy. Weird)

The whole thing was rather nice and I found that I have run out of blogging/podcast business cards. Oops. I still have a few for the music teaching and for the authoring but I need to print new ones to promote the podcast and blog. (My husband is still rather surprised by my author business cards because I choose one of his family names for my pen name. Seeing that name on something looking official throws him off big time.)

We only stayed for three hours and were the first to leave but it was starting to drizzle a bit and we both are such introverts that three hours with people feel like enough. And then we zoomed back home. My Fitbit told me that it took us 1 hour 7 minutes to get there and only 50 minutes to get back.

We sat together and talked for a bit back home, then I fetched the boy to tell him that we were back. He had spent the afternoon and evening eating all the potato chips and sweets, apparently. Which is a rather sweet way of celebrating having the house to himself for a 16-year-old.

And then I went to bed too late.

Today there will be some stretching and some writing and I really want to move some project forward today as well. It might also be a good idea to write all my ideas about productivity and the Kanban board and goal-setting down somehow. And I had a great idea for how to structure the teaching website. Because I think I’m stuck on that because my vision for what it should look like isn’t working and thenI remembered an interview on the Creative Penn podcast with André Chaperon who was talking about „attraction marketing“ and stories. And now I’m thinking that it would be a good idea to think about how potential new students could find us and what they want and how to help them.

Because we are attracting rather different people. Parents who want a teacher for their kids, adults who either want to start playing an instruments or who had lessons in the past and want to dive in again, teenagers who are fed up by having to learn a certain way, all kinds of students with all different kinds of problems that we are all helping but building a website that reflects all those approaches is tough.

But then we are creative people. So I guess we can come up with something.

Sorry for the wordy post. I hope you don’t mind.