I woke up at six after too short a night – I should have turned the lights out earlier. I had been so fed up with my sloth-like habits the day before that I actually managed to meditate and write morning pages. And then I forced myself to open the laptop and spend twenty minutes with my novel. I only wrote twelve new words but I did look through the last three scenes and got myself up to speed on what had happened before. It is somewhat hard to write a story when you don’t quite remember what the characters did before. Which is what happens when you step away from writing for a few weeks.

I got up, had breakfast and knitted a bit while my husband had breakfast. It was one of those days where we are all crossed wires and odd timing, unfortunately. We waited for the boy, I did dishes and such and then it was time for the epic errands and grocery run. I walked to the bakery and the health food store, forgot that we need stamps and went back home. I unloaded what I had bought, pulled out my bike and a canister and went to the gas station to buy gas for the lawn mower.

That is always a little weird. Pulling up at the gas station with my bicycle, then getting that teensy, tiny canister out, filling it and then walking up to the cashier to pay my five euros. But I’m not buying a car just so that buying gas doesn’t look weird.

Back home again and then I walked to the grocery store. By then I was rather hungry and somewhat exhausted.

Back home my husband was stressed by making lunch and we were both really late. The boy hadn’t shown up in time for lunch again. He claimed not to have known that he should have shown up at the usual time without being prompted. Yeah, right. Food was good, nonetheless: 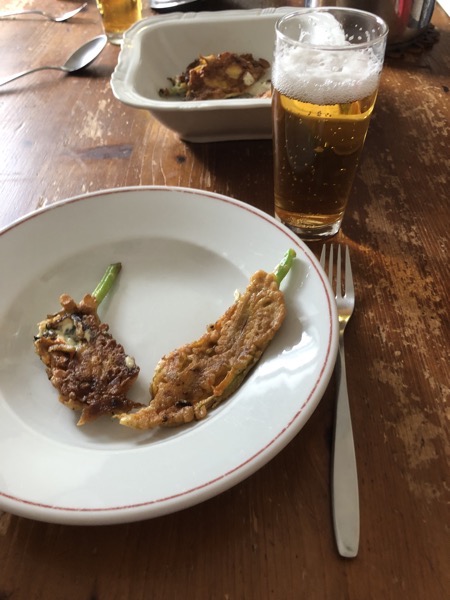 There really are a lot of zucchini blossoms this year. 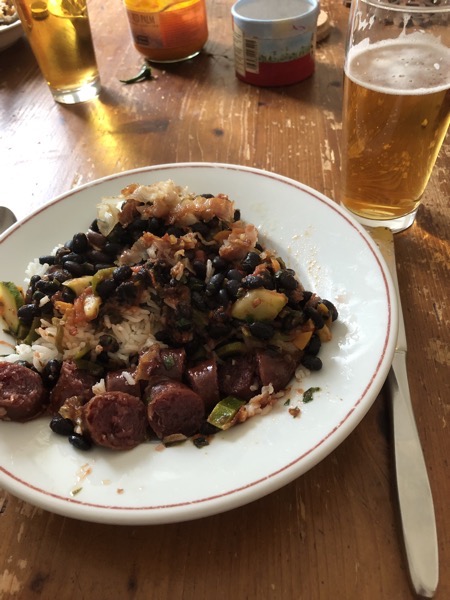 My husband went to take a nap while the boy was still eating. Because we were expecting the firewood delivery. I had just sat down and had a bit of a break when the doorbell rang and then we got loads of firewood. Hopefully enough to last us all through winter. So I raised my husband and went outside with the boy in tow. We moved and stacked the wood for two hours. I decided that it was okay to skip exercise for the day. I still want to get back to strength training but not that day.

When we were finished with that (there is still some wood that we need to find a place for but it’s in a wheelbarrow under a roof for now) I saw that not only there was a huge pile of dirty dishes, no, I also had to put away all the groceries that I had bought. Meanwhile my husband was emptying all the trash cans in the house because it was trash day today and found that there were maggots in the kitchen trash can. Fun! So, first I assisted my husband while he was cleaning that mess, then I put all the groceries away and then I did that big pile of dishes. After that I had exactly 23 minutes until I had to teach a voice lesson.

Or so I thought. My student was thirteen minutes early. Teaching was nice, then the boy and I watched one episode of Star Trek: Voyager and then it was definitely time for bed.

So about a third of my to-do list did not get done but I’m okay with that because I also did some stuff that wasn’t on it. Definitely not an unproductive and wasted day.

I am hoping to get some more creative work in today. I want to write some more new words, go for a run, prepare and record the podcast and not spend the whole day on instagram. We’ll see how that goes.