I seem to have been so tired that I didn’t wake up from my (silent) alarm. Woke up fifteen minutes later. That wouldn’t even have been a problem on a school day much less during summer break but it shows me that I need to get to bed earlier.

I lounged in bed, managed to meditate at least and had a nice and quiet early breakfast. My husband showed up around the usual time but by then I had already made a pot of mint tea and folded a load of laundry. For once I didn’t want to sit around all the time.

I knitted a bit and was reminded about all the vegetable I will need to reap and use over the next few days. My husband was a little stressed out and tensed but managed to pack without my help. I did the breakfast dishes with the boy’s help and then sat around waiting for my husband to leave which he did around noon.

Then the boy and I went out and had sushi for lunch. Which was rather nice. I forgot to take a picture, sorry. And then we bought some lemons because I wanted to make lemon ice cream.

Which I did and it was rather delicious: 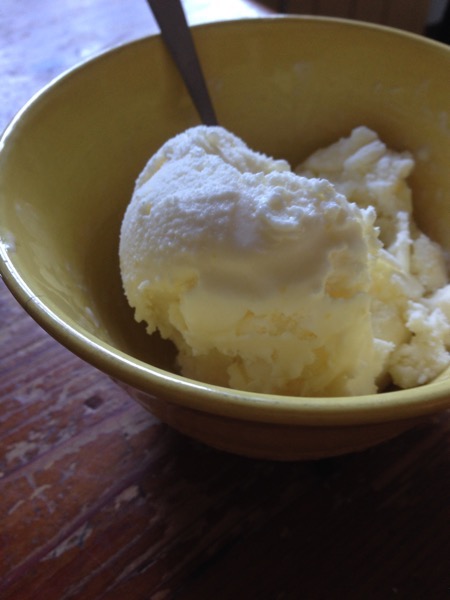 Between making and eating that I taught two students which was nice as well, and then we ate more ice cream for dinner. While watching Star Trek. Then we talked some more and I watered all the things in pots outside.

I saw that there was yet another webinar. That presenter usually doesn’t have replays so I watched a good chunk of it even though it was past my bedtime. Well, turned out I had already seen that one. Or at least the part I managed to stay awake for. I did practice drawing lines and circles while listening so there was that.

But I went to bed way too late and didn’t sleep well.

My original plan had been to write and write all day but then I realized that I just didn’t want to. I actually would love to try just hanging around doing what I want for a few days and see what happens.

Today I want to go for a run and do some grocery shopping. There are all kinds of things I could do, sew, write, spin, read – we’ll see what happens. And I’m planning to make pasta salad for lunch.