I have a confession to make, I usually write these posts the night before (or late afternoon) and set them to be published the next morning. If something goes different than planned I change it but otherwise I just leave it as is. Now, I am no longer holding myself to daily blogging, so if I miss I’ll miss – no big deal – and that means I am experimenting with publishing the posts just after I wrote them.

And that is why you’re getting two posts in a day today.

I didn’t sleep well at all and got angry about it until I remembered that it was all because of the heat. Sorry for whining about that so much.

So I woke up cranky and did not write and the whole morning went different than anticipated. The boy got up late, my husband had breakfast before him and then went off for running early. Which meant I couldn’t fit all the cleaning in while he was away because I needed to do a huge pile of dishes first.

We had planned to make stuffed wine leaves because the ones in our yard were at that stage where they are barely big enough but not too leathery.

Making stuffed wine leaves is a big thing to do. We also made skordalia from scratch and I made apricot ice cream.

So we spent all morning cooking. And had to actually wash two pots in the process because we needed them a second time. Here it is, our splendid meal: 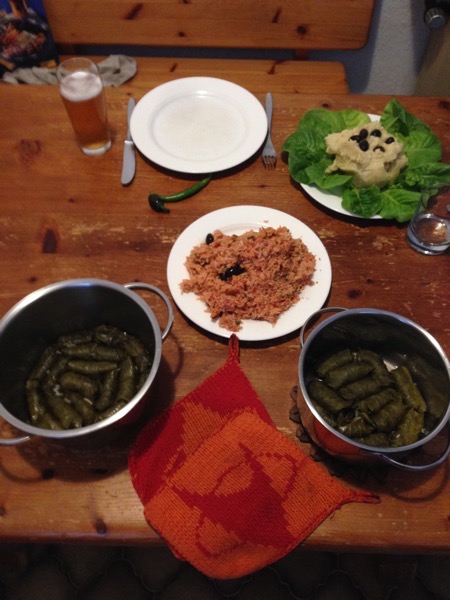 Wine leaves with and without meat, tomato rice, and the potato-garlic creme. There might have been a bit of drama. And the boy might have come home right in the middle of high-tension cooking. He wanted to show his report card, of course, but we were pressed for time. 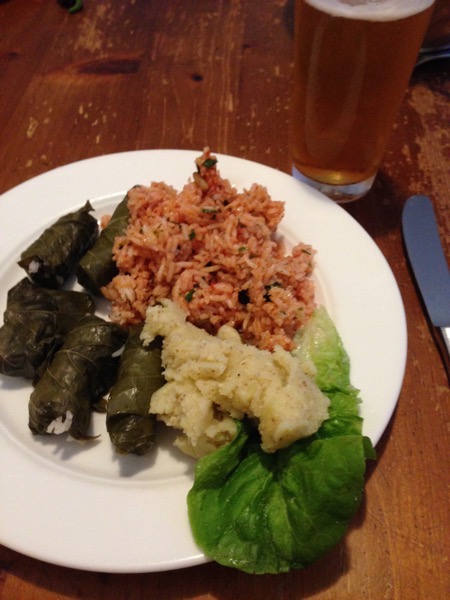 And I used my ice cream maker for the first time in two years: 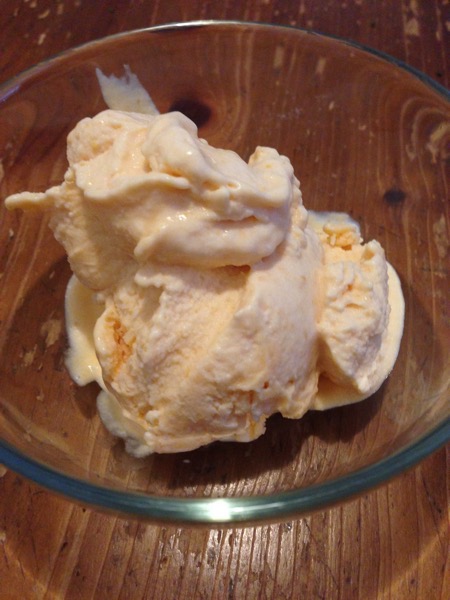 Homemade apricot ice cream! It was so good. I used the apricot compote I made the day before and folded some heavy cream in and a bit of lemon juice. Very, very good.

The boy’s report card was great. His grades were better than the year before. He finished his last year of Latin better than we thought he would and all in all he did rather well. (I’m trying to word this in a way that protects his privacy while still gushing. That’s not an easy feat.)

I should have taken a picture of the dishes afterwards. It took more than 15 minutes to just sort everything and get it ready for the actual washing. By the time the boy and I were finished with that (my husband had to teach earlier than me) it was time to start teaching for me as well.

One student canceled which gave me a bit of time for spinning and watching the Tour and my last student didn’t show which give me time to write this.

Now, I am a little miffed that I didn’t manage to finish cleaning the house and to write today but I’ll get to that eventually. Next up I’m looking forward to watching some Star Trek and celebrate the last day of school with some more ice cream.

Tomorrow there will be running and going out for Greek food (yes, I know, we didn’t realize in time but the food tomorrow will be quite different from today) and a lot of sitting in front of TV and spinning.

So, this is the official start of summer break!