Which made me feel a ton better.

So now I have done these two exercises two or three times and the result is that my knee is hurting way less than before.

See, there is this theory – that my orthopedist adheres to – that joints start to hurt because the constant use degenerates them. Sounds logical and when you look into my knee joints you will see some tears and some deformation for sure. But the funny thing is that when you start looking into the joints of people who don’t have pain you will often find the same degenerative signs. Which is puzzling.

Now there is another theory out there (and I did read a few books about it back when my hips were hurting) that the problem is actually caused by muscles being all tense which then pulls on the joints which then makes the brain think that having pain would be a good idea. (You do know that pain is actually a brain thing, don’t you?) And according to that theory you should feel better if you can get your muscles to loosen up. Which is why when I was stretching ‚into the pain‘ (no worries, I’m careful) things started to feel much better immediately.

I am overjoyed, I can tell you. And I will continue stretching. (Me lying on my stomach while trying to catch the ends of a scarf that I tied to my foot so I can stretch the front of my legs is a sight to behold. The boy almost fell over laughing.)

I did wake up early and I also did manage to write for 25 minutes before breakfast. Phew. I did forget to meditate. Seems I need to build my morning routine back up.

The boy came downstairs before I had even left my bed. First, he wanted to order himself a new phone and second, he needed to leave early because they had a lecture about HIV and sexual transmitted diseases in Munich, as one does. It was a school thing.

So we ordered the phone, which he is paying for with his own money, by the way, had breakfast, I helped him look up the best way to get to the lecture (right in Munich) and off he went.

Then I finished „Magic Triumphs“ which has a really great ending. All the open ends neatly wrapped up and all. Loved it! And ordered „Resilience“ by Linda Graham. I feel that I need to get more resilient. Maybe the book will help.

My husband showed up, had a neat plan for the day but unfortunately had forgotten that his aunt would show up to drive stuff to the recycling place which threw his nice plan all off. Then I read a text from the boy that the trains had stopped asking how to get to the lecture instead. Then I saw that the boy’s message was already half an hour old and that he should have managed getting there by then.

Then my husband and I talked. About the last few days and what went wrong and how to do things better in the future. This might be one of those, „I did everything right and things went wrong anyway“-situations but I’m not quite sure yet.

By then I felt so good knee-wise that I opted to walk all the way to the supermarket. Walked there and back and the knee was only hurting about as much as it did at the start of the whole thing.

We talked some more and then we made lunch: 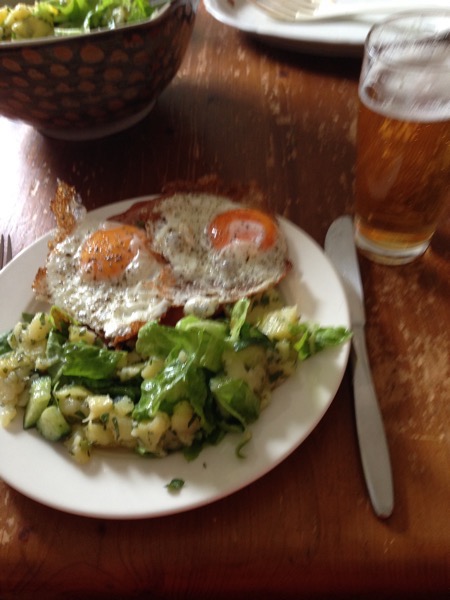 It was really good. I then texted the boy to ask if he would be home soon and he answered that they still had to pay. Huh? Pay?

I ate some chocolate. I started reading „Iron and Magic“ by Ilona Andrews, and then it was time to teach. Not quite the two hours of writing I had hoped to get in that day. Well, at least I had spun a bit in the morning so that was good.

Today I will do all the things! Pizza-making and cleaning and writing and spinning and watching Star Trek. Typical Friday. And then it will be the weekend! With more of the same. No cleaning, though. Pity.