I did get enough sleep and woke up early but – surprise! – was too preoccupied with the knee to actually use that time. I might fare better with setting the alarm later and just giving up on getting any writing done in the morning. We’ll see.

Husband is still panicky. Experience tells me that this will go on a bit longer. He is still upset about the whole garage thing. Because when we say no to his friend’s request we force him to pay four times the money to store his stuff. Um, no. He asked us for a favor. We are saying no because storing that stuff in our garage would be a major inconvenience for us. It’s not our responsibility if his son decides to move to a place where there is no room for that furniture. Nope. That has nothing to do with us. We just happen to have a garage that’s not filled to the brim right now. We wouldn’t even be obligated if that garage was empty which it isn’t.

So that was fun.

After breakfast I waited a bit so I could talk to my husband and spin a little, and then took a shower and took off with my hair still wet.

At the doctor’s office everything went rather smoothly and I was out of there pretty soon. The doctor basically glanced at my knee sideways, told me that it was probably a torn inner meniscus, did an ultrasound, said, „You still have a knee bandage, don’t you?”

Um, no. I got that last bandage in 2013. Even if it were still elastic (doubtful because elastic ages) I was about 25 kilos heavier then. The last time I tried that bandage on it fell right off my leg. So I got a prescription for a new bandage and the advice to rest and cool while the doctor was halfway out the door. Oh, and a referral for an MRI.

I made an MRI appointment in the same building downstairs right away and then got myself a fancy new bandage to help my knee. Phew.

Then I bought all the chocolate to help with the emotional stress, as one does.

My husband had biked all the way to another doctor in the meantime to make a coloscopy appointment. And go to the nice health food store.

Then we made lunch. (I decided that it is more than ‚helping‘ if one spends the same amount of time per day preparing the food as the actual cook. Even if one doesn’t touch the pots.) Lunch was really good, as usual: 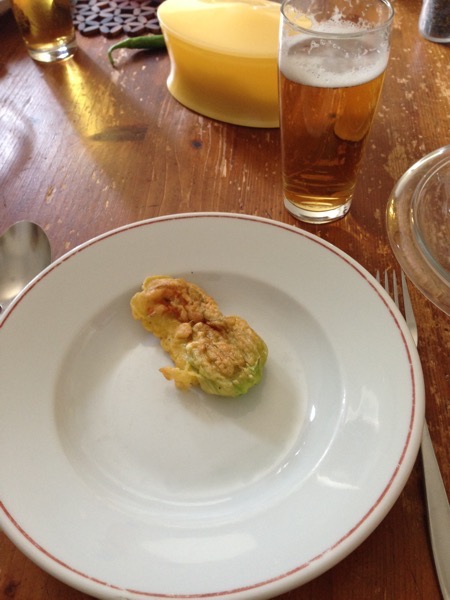 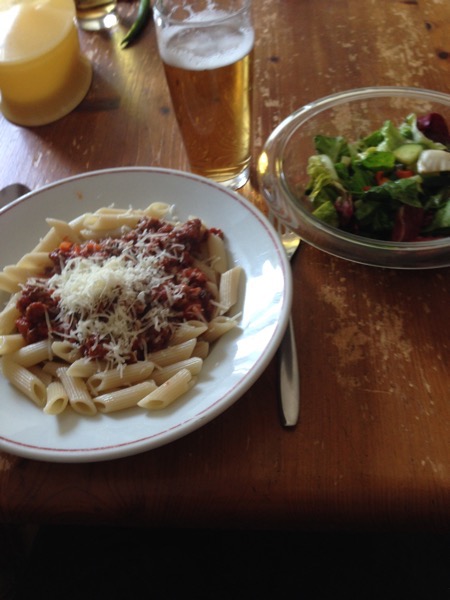 After lunch I had quite a bit of time which I had planned to use for writing and spinning but while I did eventually end up in front of TV I found that I was so drained from all those emotions dealing with the knee and everything that just sitting there was enough for the moment.

I did pull myself together in time to teach my two students, started to write this blog post, did a bit of email and helped my husband think through some stuff.

And then I brushed my teeth and went to bed. I know that my goals for July are fading out of reach but right now I don’t care. I am hoping that the knee will get better and I will not need surgery but if I do I do.

Resting the knee also means that I should not carry heavy grocery bags around methinks, so I will take the bike to the supermarket today. I do have a bit of time after lunch but that break tends to vanish into thin air on Thursdays because my husband also starts teaching late and the boy doesn’t have school in the afternoon. So we tend to sit a little longer at the table and talk a little more which is nice but means that I can’t count on having two hours for whatever project I am working on.

Is it August yet?