One thing is the fact that I’m doing everything at home. Work, creative project, exercise, everything. And all the time there is at least one other person in the house with me.

Because I’ve been thinking about all those time management videos and books and blog posts when they tell you to defend your creative time and defeat it against everything. „You should treat your appointment with yourself for your creative work as if you had an appointment for surgery.“ I read in one of Honorèe Corder’s books.

Because that’s why I work the way I work.

But let me back up a bit.

I did wake up from the alarm after not enough sleep because I had made the mistake of being fed up right in the middle of novel number four or so in the Samantha Moon series (another child in jeopardy and I can see the building conflict from a mile away and can tell you what the author will do with the story for maximum torment which means I’m out for now; I don’t really like books with children in jeopardy) and decided to start reading something really, really good instead.

So I started the last Kate Daniels book by Ilona Andrews („Magic Triumphs“). And didn’t want to put it down. Because it is that good. Which meant that I turned the lights out too late. Always a danger with good books and reading at bedtime.

In the morning I still managed to write a few words and morning pages and meditate and not turn the internet on first thing. Which was very good. Then there was breakfast. And then things started sliding a bit. I started something or other after breakfast and didn’t end it in time to do more writing before my husband’s breakfast. Mistake.

My husband was totally super-overwhelmed by everything, especially the whole balcony thing and also his friend’s request to store some of his currently unused furniture in our garage. My husband and I had agreed to look at the garage and maybe declutter that morning.

So there was talk about the balcony and about the garage and about people and such and the overwhelm kept on building. In the end, about two hours later, I went upstairs to talk things through with my mother-in-law while my husband went outside to start marking things for decluttering. And thought about shifting two bikes to the bike shed which is currently overflowing with other stuff like the barbecue.

The conversation with my mother-in-law went surprisingly smooth. We talked about the balcony and the fact that the sour is broken and we should lift her shiny, new flooring up to see what damage there is underneath and that we will need to find someone to fix this. Because after much debate my husband and I realized that this is something we need expert help with. So I will look up who made the balcony back in the day and will see if they can help us now.

We also talked about finances and the roofer who still hasn’t gotten back to us and the insurance company and train tickets and her upcoming travel in August and all the things.

Meanwhile my husband’s feeling of overwhelm started peaking because there is just so much stuff everywhere. We looked at everything in the garage and while we can shuffle things around a little and there are a few things that we want to get rid off (like the rowing machine that my husband’s friend gave us that I used once and decided was not for me) there still is not enough room. So we decided to tell the friend that, sorry, we found that there isn’t enough room for him to store his unused furniture in our garage, not even for money. Because we still need to be able to access all the shelves and yes, we need the pile of wood and the paint and the snow shovels and the bike trailer and the really long ladder that’s the only one long enough for cleaning out the gutters. And in the winter we will store all the rain barrels in the garage and then it will be full again.

Husband was a little afraid that his friend wouldn’t like our decision. I guess, yes, he won’t like it but we’re not responsible for his furniture. (Which was another thing that was bothering me. What if something happened to his furniture in our garage?)

So when we were done with all that we were already too late for making lunch. The boy came home early but he had lunch with his grandmother. We had something Thai-like: 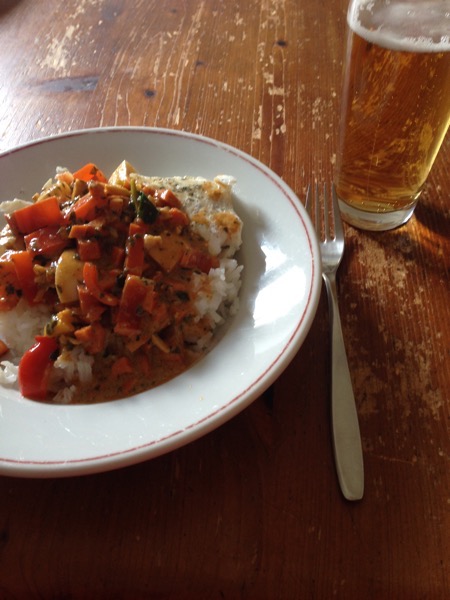 And so my whole morning had gone sideways. Because my original plan had been to try and catch up on writing.

I did manage to do the dishes right away which was good and caved in to the craving for gummy bears that had been plaguing me for about a week. It was this feeling of everything being meh and wanting to have a little extra pampering. Never mind that gummy bears don’t agree with me. So I went out to the next supermarket, got a huge bag of Haribo and plunked down in front of TV watching Tour de France while eating it all. And then I felt miserable as I usually do when I eat things like these.

That has nothing to do with feeling guilty or anything, it’s just that there is so much fructose in these things that I often feel physically ill afterwards. As if I had a fever. Fun! (No, I don’t know why I’m doing things like this either.)

And then I taught all my students, started this blog post and mostly called it a day.

Today I will see a doctor about my knee, only teach two students and catch up with everything. For realz.