I woke up from the alarm at 5.30 and immediately got up to open all the windows. The ones in the basement were already open, it turned out that my husband had woken up at 4 and taken care of them. By seven I had to close everything up again because the heat was starting to creep in.

My husband showed up for his breakfast early, while the boy was still at home. We talked about something I had read on the internet for an hour while I knitted on the purple cardigan.

Then we did the dishes and shortly afterwards I rode my bike to the big supermarket. I did an epic grocery run that I could barely lift so taking the bike trailer was definitely the right choice. Also, if I had walked all the way everything frozen would have been totally melted on the way even with the cooling bag.

We started making lunch early, waffling between mashed potatoes and gnocchi until the end. The potatoes we used weren’t the right kind for either but not nice enough to be eaten as is: 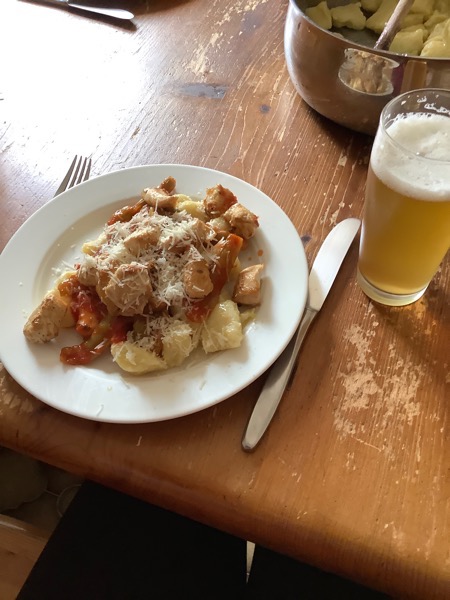 The whole morning the phone had been ringing and of my three students for the day two had canceled. And I had a reschedule for today. It seems the crazy phase of the school year has started up again. July is always a mad dash with students having to reschedule all the lessons.

After lunch I did the dishes and asked the boy to go to his oral surgeon appointment without me. It was just to remove the stitches and I didn’t think I was needed.

He came back after fifteen minutes with everything being fine and we went off to a jeans shop in town that was going out of business. My mother-in-law had seen it the day before and had wanted to buy two pairs of pants for the boy but didn’t know his size (neither did we). Since buying clothes for a 16yo- without consulting him is always a bad idea I had talked to him but he refused to go there with his grandma. He actually didn’t want to buy anything but had to concur that owning just two pairs of pants (one with holes) might be considered a reason to go out and buy more.

He asked me to accompany him which I was honored to do. Even if that meant I had to change my plans for the day. The shop was almost empty but the saleswoman was as professional as ever. One look and she had an idea about his size and after trying out half a dozen pairs of pants we left with two pairs of jeans (one blue and one black) and a black knitted cotton sweater. Everything was so deeply discounted that I had to pay only 50 Euros instead of the regular 200 or so.

And then we had some ice cream and walked back home.

There I waited for my student and we had a really great lesson.

After that the boy had to leave, he is going to the theater in Munich to see Macbeth with school and then I finally could test my new microphone. I am very pleased.The setup was really easy, and the sound was good. There are still a few things I need to tweak and I will probably not be able to plug my earphones directly into the microphone but that’s something I can work with. Phew.

I had hoped to spin a little, again, but when just sitting in the coolest room of the house is making you sweat spinning doesn’t sound appealing.

I almost forgot to do strength training but remembered eventually.

Since I was super-tired I just declared defeat and went to bed. This time I actually did turn the lights out early.

Today there will be the cleaning and frozen pizza because my husband is meeting his friend who lives in Spain and they are going out to the Greek restaurant. I didn’t really want to cook so I decided that eating frozen cardboard once in a while won’t kill us.

I’ll start teaching early but have lots of breaks so I’m hoping that I won’t melt and then I’d like to watch some Star Trek with the boy. And then it will be the weekend.