I woke up around 6.30 or so and just read stuff on the internet again. Once of these days I need to get back to more productive ways. I had breakfast and just when I was finished the boy appeared. He had set an alarm at eight because of his wisdom teeth extraction at ten. Shortly afterwards my husband showed up.

The time until surgery went by fast and we were headed out right on time. Okay, a little early. I can’t stand being late and I like to leave a bit of extra time for things goin wonky.

At the dental surgeon’s office we had to wait for fifteen minutes and then the boy was led away. He was all set up with music on his cell phone and earphones. I waited for about 75 minutes making great progress in the current novel („Swanhild, die Blutige“ by Andrea Instone, weird title but good book so far) until I was told everything went fine, he had cysts on three of the teeth and the fourth one had a connection to his, um, maxillary sinus (at least that’s what the dictionary says; Kieferhöhle in German) so good riddance. When I was allowed to see him again he was sitting upright in a dim room connected to a pulse meter and that thing they put on your finger to measure the oxygen in your blood. And he was very, very sluggish.

We had opted to pay for a form of sedation that makes you forget everything while still being conscious. He behaved a little like he was drunk. And he did everything he was told but not much more. I received instructions for what to do after surgery and made two follow-up appointments and then I led him back him. He didn’t like it that I was gripping his arm but when I tried loosening my grip I found that I had a little trouble steering. I was a bit worried he’d just walk into traffic. I found myself scanning the ground like when you’re out with someone who has trouble walking, announcing every small obstacle and making sure to only cross the street when there was no car in sight anywhere.

We did arrive home safely but then I needed my husband to look after the boy while I was getting his medications. Nasal drops and ibuprofen. Of course, my husband was in the shower when we came back.

I did manage to get everything and install the boy in the master bedroom which is much cooler than his own room right under the roof.

Then I helped making lunch. My husband was rather weak at that point, running in hot weather hadn’t helped a bit: 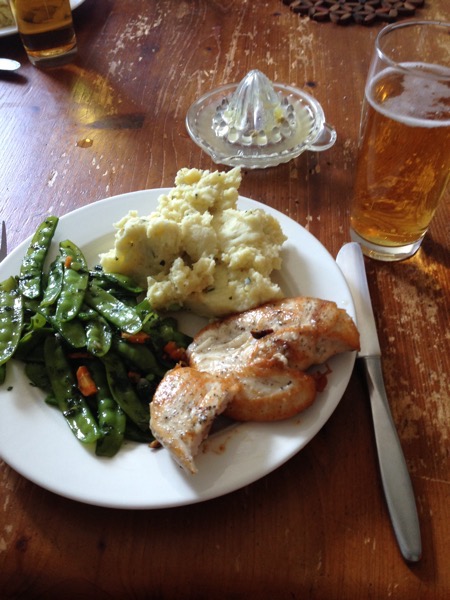 The boy had mashed potatoes and pureed sugar peas. He was still a little off and had to use a rather small spoon because he couldn’t really open his mouth still.

My husband and I did the dishes and then I went off to teach two students in a row. Every time I checked the boy was sleeping.

I know that that’s not a productive use of my time but well, I couldn’t help it.

Then I went to the grocery store for cold cuts and yoghurt and waited some more.

We had dinner. Scrambled eggs and sandwiches for me and my husband and scrambled eggs and sort of porridge for the boy. He only ate a small portion but he did eat and used ice packs all afternoon to keep the swelling down. Other than that he sat in bed and played with his new Nintendo Switch.

And then, about an hour after midnight my new iPad mini arrived. Hurray! So I played with that a bit, made sure that the boy took all his medications and went to bed early.

Today I’d like to go for a run, if possible, and record a podcast and not much else. It’s a public holiday here because of Corpus Christi. I’m expecting the boy to be bouncing back quickly and am hoping that things will return to normal around Saturday. Of course, that’s when Pentecost break will be almost over. Well, it is what it is.