I actually managed to sleep until 8 this time, got enough sleep after going to bed around midnight for once. Very good. I still feel as if I need a week to decompress and get back to myself.

We woke up, I didn’t meditate and such but wrote the blog post, took a shower and then we went to have breakfast at my parents’. There was much talking. My mother asked me to play the ukulele for my relatives in the afternoon and I started panicking because I haven’t played a lot lately and have forgotten all the lyrics. So I spent fifteen minutes trying to get the lyrics of one particular song onto my iPad. I succeeded.

My mother remarked that I was looking all winterly with my denim skirt and long-sleeved t-shirt. I was confused because the main difference between that outfit and the one I wore the day before was the long sleeves. Not quite what I’d wear in winter. (Later that day I was reminded that that generation is rather convinced that dark clothes are way warmer than light ones, so if you’re sitting in the sun on a hot day in white pants you will be nice and cool but dark pants will be way too warm. Whatever.) I almost considered wearing the orange dress with the red polka dots a third day in a row but decided against it. I like that the skirt has pockets. And if my mother feel warm when looking at me she is perfectly free to look away.

I did a singing warmup and then we went over to my parents again to go out for lunch.

We were at a place that had been recommended to my mother for plentiful, cheap asparagus but it turned out that that was a one-time thing. The vegetarian options were limited but there were options at least and our waiter was charmingly young and inexperienced. My beer took about half an hour. I should just have ordered a regular one but I am a sucker for „Kellerbier“. (Sorry, I couldn’t find a translation for that.) I had asparagus and schnitzel: 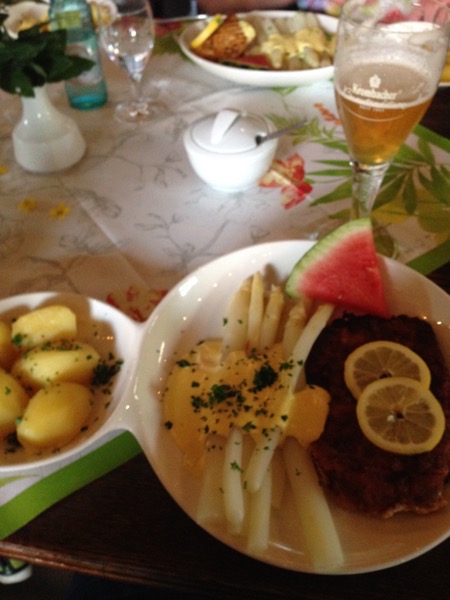 The boy had fried camembert: 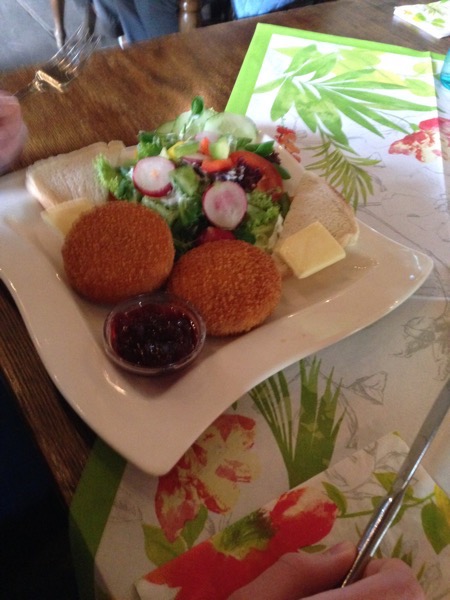 And then a big cup of ice cream to offset the fact that his main course was just an appetizer. My mother ordered the salmon steak (great move, ordering fish at a farmer’s restaurant nowhere near the sea) and then complained that it was dry. Since my mother only ever eats cooked salmon at restaurants she didn’t know that fried salmon is almost always dry. No way around it as far as I know.

When we left the restaurant we met a friend of my aunt’s that I hadn’t seen in decades which was kind of nice.

We went back home, helped my mother a little with setting up for the kaffeeklatsch and retreated to our apartment for a bit again. We returned fifteen minutes before the guests were due and helped a little more.

My aunts were only fifteen minutes late which is a sort of record. (I know that it’s confusing when I talk about ‚my aunt‘ and ‚my aunts‘. The thing is that when I say ‚my aunt‘ I mean my mother’s younger (and youngest) sister and the other aunts are her older half-sister (there was another sister but I never met her because she died when she was young) and my mother’s sister-in-laws of which there were two.) One of my cousins came along. She lives in Munich but we never meet. Not because we don’t like each other, just because we never get around to it, mostly.

We had cake. And some more cake. And tea and coffee and then champagne. And then they left after a few hours of incessant talking. The boy remarked that he had never met that particular style of conversation before, the one where several people always talk at the same time and switch around between conversations right and left without losing a beat. Where my aunt talks about something to my other aunt who then turns around to answer her daughter’s question while the first aunt never stops but instead turns to the boy and continues her story without even taking a breath.

Well, I explained to him that that is the kind of conversation I grew up around, where everybody always talks regardless of anyone else listening and where you often take part in two or three conversations at the same time. My husband finds that intolerable and insists on people taking turns when talking and really listening and being interested.

I have to say that there is much to be said for his kind of conversations, for one they are way less strenuous. And there were many points that afternoon where I wanted to hear what someone was saying but couldn’t because someone else was blaring into my ear at the same time. Still. That whole taking turns-concept takes a lot of restraint for me. I was raised as a multi-tasking conversationalist (and I was knitting the whole time, of course).

My mother made me fetch my ukulele and I sang a song. I had expected to play at least two and maybe an encore but it turned out when I stopped singing and playing after the first one and just looked what happened they were asking me a ton of questions about the ukulele, like „Um, so is this like that instrument they play in Russia?“ „No, this is not a balalaika,“ and then we were done with music. And the chatter continued.

Everybody was finally gone by 7 pm, we helped putting all the chairs back where they belong and get all the dishes into the kitchen an then I realized I wasn’t all that hungry and that I’d rather not talk for an hour or two so I asked the boy if he would be okay with ‚skipping dinner‘, told my parents we were too full to eat and would just have a few nuts (which in reality was half a bag of potato chips each and some licorice) and watch more „Good Omens“.

We watched some quality TV and enjoyed there being only the two of us and went to bed.

Today we will leave here at around eleven and then do the trek home. We will arrive about an hour after dinnertime and I am really looking forward to it.