I actually slept until 7 am or so. Still not enough sleep but closer. Since the boy slept on I tiptoed out of the bedroom and started my day in the living room, meditating and writing morning pages.

I took a shower and washed my hair and once the boy was all up and ready we went over to my parents for breakfast. Cue endless talking. It was decided that we needed more groceries and the boy and I managed to convince my parents that we did not need to be driven to the grocery store that is only 1.5 kilometers away and that, yes, we would be able to transport some veggies and gummy bears in my daypack.

My mother still thinks that I ride my bike everywhere when grocery shopping despite me telling her every single time that I mostly walk. And yes, I do carry all those groceries. Yes, I know that she can’t lift her shopping baskets after her weekly shopping tours for only two people. I am 25 years younger and work out a lot more than she has ever done. Also, I do all my shopping on foot which means I’m used to it.

Walking to the grocery store was very nice and Google maps showed us a shortcut I didn’t know. 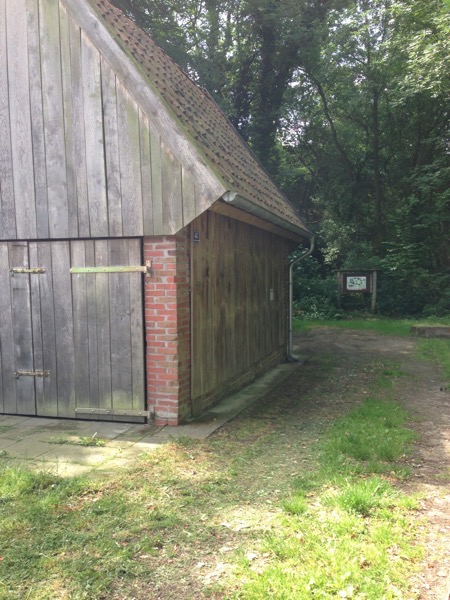 Here’s a picture of a random sandstone quarry on the way.

The boy and I got to talk and then we chose loads of candy and chips and soda for the rest of our stay. We walked right back over the hill and my mother was pretty surprised that we were back already. (It’s funny, my parents’s house is at the foot of the one hill in the region, the local castle sits on top of the hill and every time you want to go to the middle of town or the castle or anywhere, really, you start out by walking up the hill.)

Then it was time to make lunch and I only helped a little. We had something with mushrooms, rice, crème fraiche, tomatoes and cashews. (No picture because my parents don’t do social media. My father has started reading „Facebook for Dummies“, though.)

After lunch the boy and I took a little break in our apartment and then went off to the castle. It has been ages that we last went inside and there are more rooms to see. It was lovely. 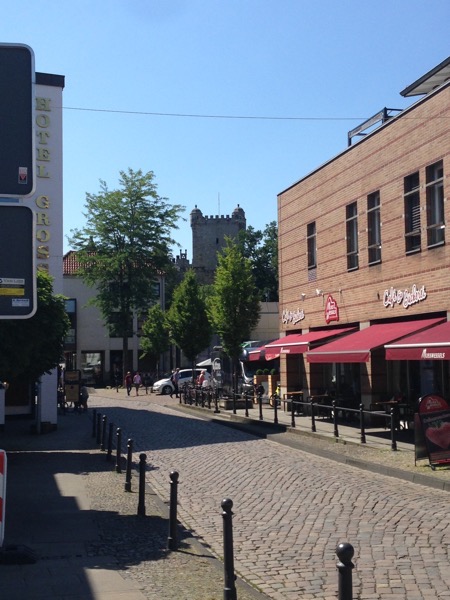 The castle peaking through the houses on Main Street. 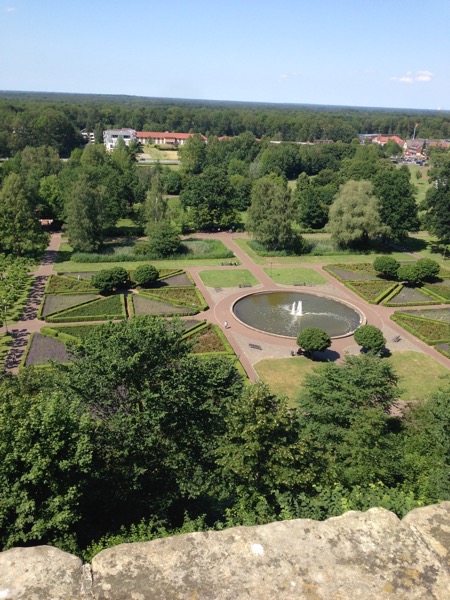 View from the top of the battlement down to the castle park.

The weather was rather hot and I was happy to be wearing my orange dress with the red polka dots (got a compliment for that one from my mother, by the way, which surprised me; I’d have thought that it was too bright for her taste). We briefly considered getting ice cream but dutifully went back to my parents for „coffee and cake“. (You probably all know that „coffee and cake“ is a German institution, a separate meal taken in the afternoon not unlike British teatime.)

We decided it was too hot for tea (and the boy and I don’t do coffee) but had some water and nice cake my mother had baked.

After that and some chatter and phone calls with my aunt back and forth it was time for dinner which was sandwiches and then the boy and I retired to our own place to watch more „Good Omens“.

By now our plans are pretty set, we will do a nightwatchman guided tour tonight (unless the weather is foul), go out for lunch tomorrow, meet my aunt for „coffee and cake“ in the afternoon and then walk off into the noon sun the day after.