Woke up around six again, read the internet until breakfast and „The Labyrinth Index“ afterwards. Knitted a bit.

Then my husband showed up and we talked and did the dishes and the boy was late so we decided to go vote early. Which was a very good idea, there were barely any people there when we got there. I just hope that there were more people voting later. You know the drill, voting is important.

With the most important thing out of the way we walked back home to find the boy coming down for his breakfast. It turned out that his classmates would not come over to whittle some more chess pieces. They rescheduled for Tuesday.

So, an almost empty Sunday then. It’s funny, I have spent a whole week doing mostly nothing and I still feel like I need more downtime. Maybe I’m getting used to it. The leg continues to improve, by the way. There were times yesterday when I forgot there was a problem. Which is good.

Then my husband had this idea of making veal cutlets. I approved. With homemade gnocchi. I like eating those too. But making them stresses me out a little. But things went well and lunch was exquisite: 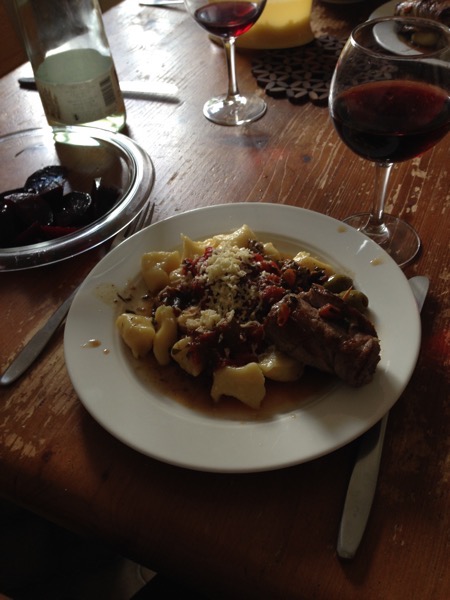 Then a lot of dishes and after that I retreated to the smallest and darkest room of the house to watch the Giro and spin: 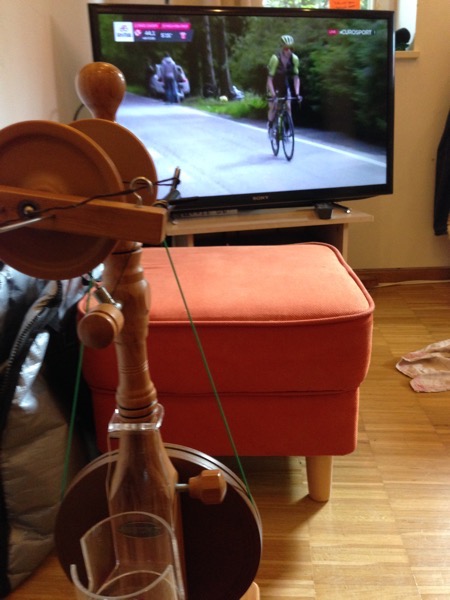 First I plied what I had spun the day before and then I started spinning for my husband’s next sweater. And I’m thinking that the spinning wheel might actually be good for rehabbing my calf muscle. Which meshes perfectly with the current spinning project. The only downside is that I am still not sewing anything even though I really want more clothes. I might have to find a way to watch the bike race while sewing.

I hung up a load of laundry and helped my mother-in-law order something on the internet and then the boy and I had junk food for dinner. (I just looked it up but there is no such thing as an „Erdnussflip“ outside of Germany, it seems. Think peanut flavored corn puff thingies.) No nutrition whatsoever but they fit the mood and the boy had bought some to share with his friends.

We watched an episode of „Star Trek: Voyager“ that was really good but then had to refrain from watching another one because the boy still had school stuff to do.

I did another pile of dishes and went to bed early again.

Today there will be teaching and maybe a walk and strength training. I’m not well enough to resume running but I think walking should be alright. I also want to prepare my lessons for the week and maybe spin a little. We’ll see.