I almost got enough sleep, woke up five minutes before my alarm. Then lounged about and meditated a bit. And then I started thinking about the scarf I want to make for the boy and went researching yarn. It has to be the right weight and super-soft.

Breakfast was had. Then more yarn research. My husband showed up and the boy was less late than anticipated. After everybody’s breakfast the boy had to decide about the yarn so I could order.

Then I realized that I need more yarn for the Crazy Tee which meant spinning more. So that is a project and I started right away with pulling out fiber and weighing it and looking for bobbins.

Not running does give me a more leisurely pace for my mornings and I feel like I need that at the moment. It doesn’t mean I actually get other stuff done, though.

My husband came back from running and went back out again to dig yet another vegetable bed. He is doing it slowly this time so we’re hoping for less bed-digging stress.

Then we made lunch. We had planned to make some kind of salad to take with us to the meditation meeting originally. We didn’t go but we still had the rice and eggs we had cooked for it. The whole thing was born out of a vague idea of rice salad and the need to use up the rest of the asparagus. So this is what we came up with: 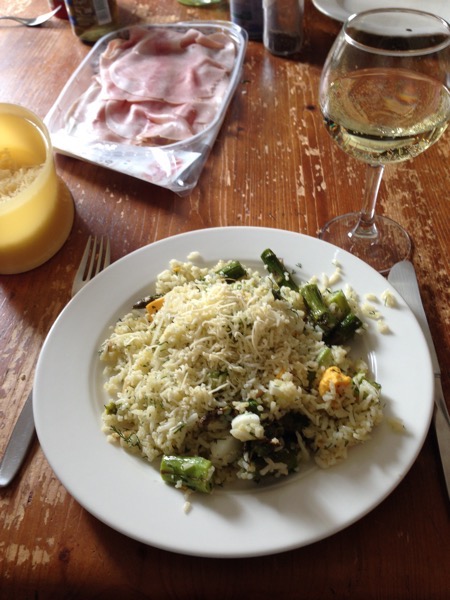 It was the first time we roasted asparagus in the oven and I really like it. There was garlic in there (roasted as well) and olive oil, lemon juice and some cheese. We ran out of parmesan so I grated some Cheddar. This was rather good and I’m hoping to make it again.

Then there were dishes and I went off to spin in front of the TV: 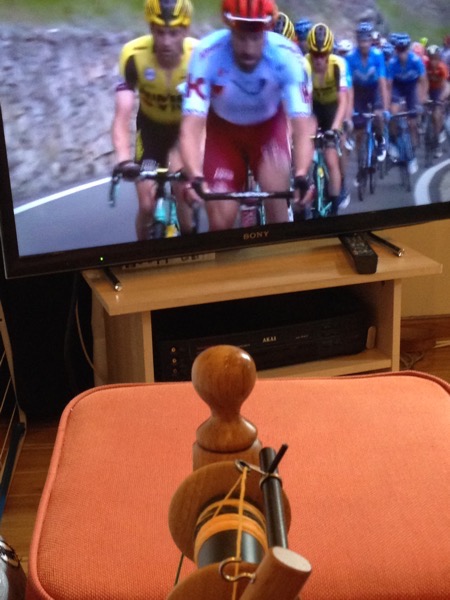 One of the boy’s classmates came over so they could work on the pieces for the chess set they are making for school. The two of them spent all afternoon in our basement working. Nobody got hurt. Well, at least not much, the classmate banged his hand twice and needed a bandaid. Not too bad. (Beforehand my husband had given the boy a lecture on how to treat someone with a serious cut to the wrist. Poor boy was a little freaked.)

I was so low on energy that I managed to doze off in the middle of the afternoon. I guess I need more sleep still. But I did manage to finish spinning the singles, so that’s good: 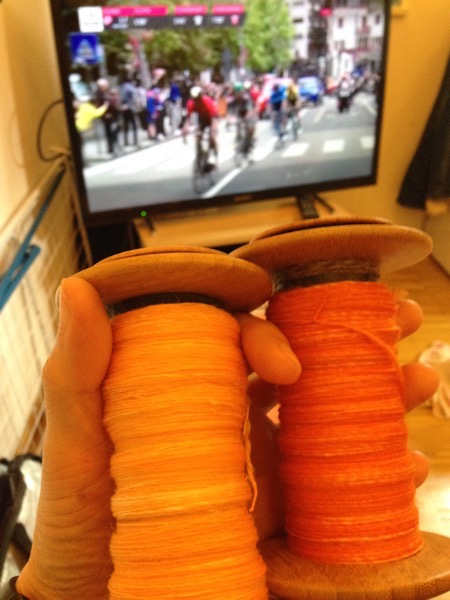 I went to bed real early and did not watch the big soccer game with my husband. I also did not watch anything with the boy. First, because of soccer and second, because he was all peopled out and still had things to do.

Today will be another day of mostly nothing. I want to watch more bike riding and would love to ply the yarn and start spinning the yarn for my husband’s sweater.

I think spinning on the wheel is good for my leg at this point. It gets moving without any strain.

Most important will be to go voting in the European election, of course. I think we’ll do that in the morning. We usually do.