I woke up fifteen minutes before the alarm even though I had gone to bed an hour too late. Weird. I did manage to write morning pages, meditate and write some words for the novel (not enough but progress).

Claudia asked about morning pages. Morning pages is something I and lots and lots of other people learned from Julia Cameron’s „The Artist’s Way“-book. You sit down first thing in the morning and write three pages stream of consciousness. So, basically everything that’s running through your head at the moment as fast as you can. It’s one of Cameron’s tools for getting creatives unstuck and she uses it as meditation.

I started doing these in the fall of 1998 after reading the book. I did them faithfully for years but these days I do them if I can but I don’t write them every morning. I find that they’re helping me process everything that’s going on and when I write them I don’t need to talk about everything with my husband which is good. The other bonus is that they get me started writing for the day.

So after all of that I made breakfast. I finally started knitting the gauge swatches for my husband’s sweater. Sorry, that I didn’t take any pictures. After the first swatch with 3 mm needles I was sure that the yarn I had made was way too heavy and wouldn’t work at all but the second swatch looks like I’m gettin gauge after all.

I’m still thinking because the fabric is much denser and bouncier than what I usually knit. It also feels a little weird to knit what’s basically a worsted weight yarn with 2.5 mm needles. I might make the yarn just a little thinner and keep the needle size. Which is an interesting balancing act. I will swatch again, I think.

Then it was time to start the weekly cleaning and for one I actually did all of it including changing the sheets. Very good. In between I started the process of making pizza from the new kind of dough I was trying. The recipe said to shape the dough into firm balls and let it sit for 1.5 hours: 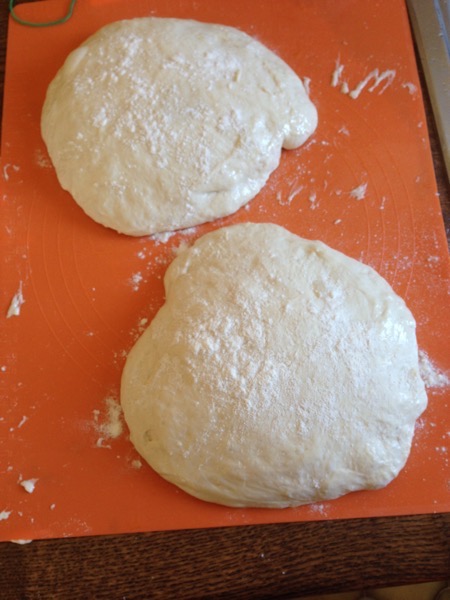 That’s how the ‚firm balls‘ looked after I had returned after getting a towel. Not very firm.

Throughout the whole process the dough was more like pudding than dough so I’m thinking to use less water the next time. My husband has declared once again that he won’t make pizza for the whole family anymore. It is a bit much with the running beforehand and the teaching after. So I decided to make enough for all of us for a change. I did leave off the salad, though.

The result tasted good, I’m not quite sure if I like this dough (it’s the one by Peter Reinhardt) better than the one I usually make. The process is certainly messier but I’ll tweak it a bit and we’ll see. This was the resulting pizza: 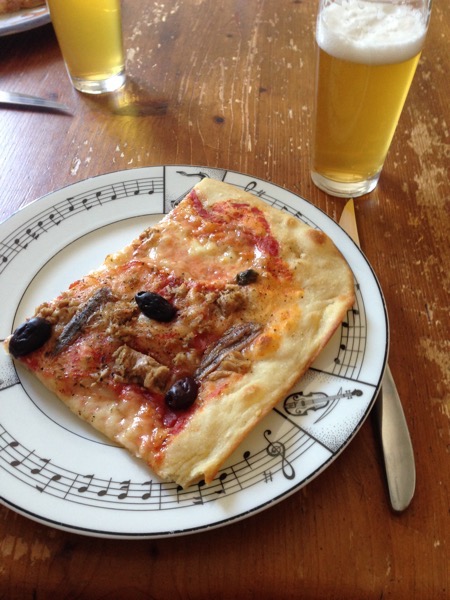 Of course the boy got mushrooms on his, not tuna and anchovies.

And then it was the beginning of the weekend with knitting and watching Star Trek and kicking back with leftover pizza.

Today there will be running and either a humungous slump or maybe some progress on the to-do list. I’m hoping for some sewing and some spinning this weekend and also bodyweight training and yoga. The boy and I decided that we were just too limp to exercise on Friday night.

So, I’m not quite sure why the day felt so super-busy but I barely had time to sit down all day. That was probably it.