To be fair with the cutting out of fabric and a little writing in the evening Sunday had looked up already.

I woke up at 5.30, couldn’t get myself to write morning pages but did meditate for five minutes at least. Opened my computer and fiddled around with the novel for 25 minutes. I didn’t write much but I cleaned up the scene I had been working on before, looked through a short dream sequence and made a scene I had written much earlier fit in after that, so now I know where to start the next time. Phew.

Got up and made breakfast, prepared the next episode of the podcast which will be the long, English one where I rush through all the topics, and when my husband showed up I switched to knitting the Crazy Tee. It is fun knitting that right now.

Then I did the dishes and such and went running. 7.2 k and the weather was sunny and nice but a little cold: 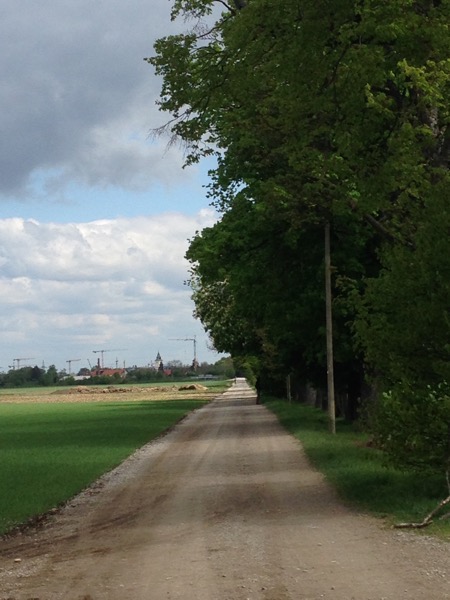 I forgot to take a picture at the halfway point because I met my husband. If you look closely you can see him standing under one of the trees. This is also where that little chapel sits and I thought you might like to look inside: 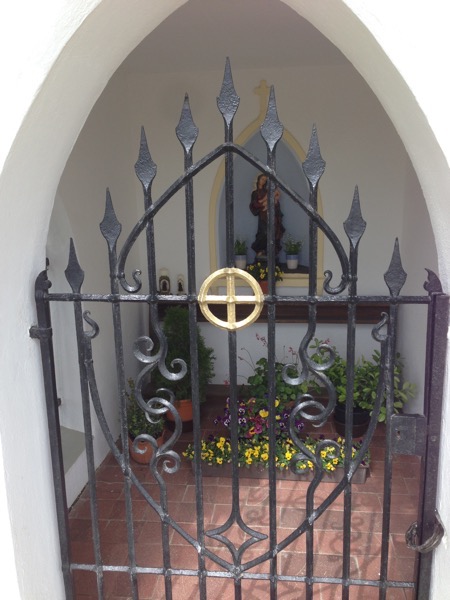 Shortly after that things got a little weird. There was a guy with two small brown dogs who were frolicking around a bench. I slowed to a walk while passing them because I always do that when I see dogs without a leash. One of the dogs ran towards me and jumped me which I really dislike and I think dog owners should prevent their dogs from doing that. The dog was clearly friendly but I didn’t want to interact and just went on, saying hello to the guy.

And then the dog nipped me in the calf.

And the owner didn’t see it and when I told him he said, „He just wanted to say hello!“ Um, really? Almost biting is saying hello? If so the dog should learn that that is not acceptable behavior. I also told him that I’d rather he’d keep his dogs closer and that I used to be really scared of dogs and he told me a) that the dog had just come over from Greece from a shelter two months ago and that b) this was my chance to …

I can also guess that he wanted to tell me that that was my chance to get over my fear because I didn’t let him finish his sentence. I was rather pissed at that point and said that he really should keep his dog closer and went my way.

I went home and took a shower. I did have a red tooth mark on my calf.

I was rather outraged but after telling my husband about it I can only guess that the owner just saw the dog jumping up at me and then looked at his other dog while this dog was biting me. Not hard, but still. So the dog owner thought I was pissed because I got the dogs paws on my leggings and I really couldn’t understand why he didn’t at least apologize. Though I have to say, getting dirty dog paws on my clothes is reason enough for sorry.

I still think that if you have a dog and if that dog interacts with someone who just passes by you should see what your dog is doing. Especially if it’ a dog that has come from a shelter and has only been in your care for a few weeks.

I am, by the way, scared of dogs because when I was a teenager we had a dog from a shelter who had been mistreated and therefore was panicked by everything and ended up biting my mother and me repeatedly because he thought he or my sister was attacked. I know all about walking a dog that you better keep away from other people. (Our was pretty afraid of children and you could never allow a child to pet him because the dog might bite.)

So that was exciting.

I am happy that I wasn’t harmed much and also that the incident did not trigger my old fear of being bitten.

The woods were full of dogs and people walking them that day, probably the nice weather. 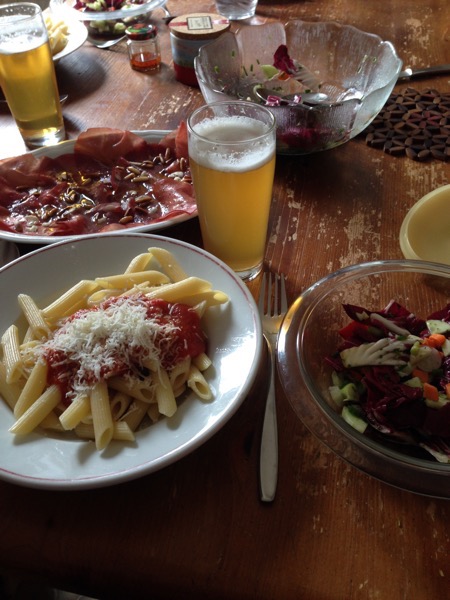 I took a bit of a break afterwards but still managed to record the next podcast episode in time for my first student.

Then I taught my Monday students, started writing this post, did some bodyweight training, did all the dishes, wrote  some emails and went to bed early.

Apart from the fact that I didn’t practice piano or ukulele it was pretty much a perfect day.

Today there will be a short run, some errands and the health food store, some teaching and more of the same. Which suits me fine.