And again I went to bed way too late and woke up around 6.30. By then I had given up on all pretense of adhering to my usual routine.

I wrote the blog post, had breakfast, crammed everything back into my backpack and purse and walked to the train station without seeing any signs of the impending marathon.

Boarding the train was a little confusing because the part where my reservation was supposed to be had technical difficulties so that there were no seat numbers or carriage numbers displayed. I did find my seat, and then found a woman with a baby asking me to swap seats so that she could sit next to her husband, the toddler and the baby. I gladly gave up my window seat.

They were surprisingly good at managing both kids and kept them mostly quiet for the whole trip which is quite a feat. I would prefer it if families with children would not reserve seats in the quiet section of the train but then I have no idea when the booked, not everybody is planning their trip so far in advance that they can choose the seat they want. Especially if you’re traveling with four people.

The train was even more crowded than usual, the one going from Munich to Hamburg and back is always packed to the gills. It was the last day of Easter break and the trains are always full on Fridays and Sundays.

I made no attempt to work on the novel, with me being totally sleep deprived on a full train there was no use. I read and knitted and read and went to the train restaurant for lunch: 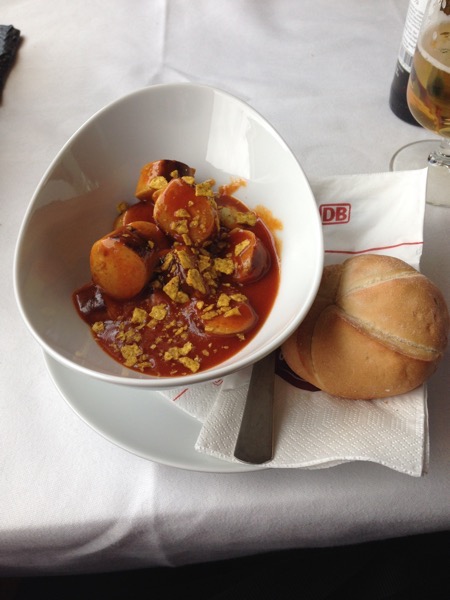 The food was meh and the beer was warm and not on tap (the waitress had warned me about the beer before accepting my order). I should take my own food more often when traveling. The food you can get doesn’t taste all that good, is more expensive and doesn’t agree with me a lot of the time.

The train was half an hour late and I was rather relieved when I was finally walking up to our house.

I greeted my family, talked at my husband for an hour, spent some time online, had an excellent dinner that my husband had cooked, watched some Star Trek with the boy and keeled over. In fact, I kept nodding off while watching TV. 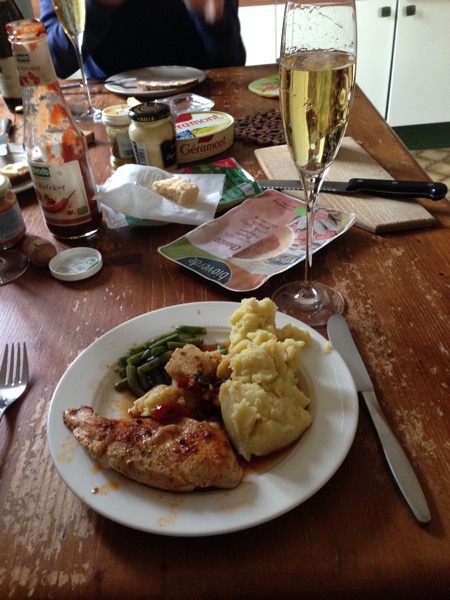 We opened a bottle of champagne because it was our 24th wedding anniversary. No additional festivities.

Today there will be the start of school, running and cooking and teaching and maybe some podcasting not sure yet.

I guess I will need a few weeks to get my energy back to normal but it was totally worth it.