I woke up at six, forgot to meditate and still didn’t have the headspace to write. And everything still hurt, most of all my knees.

My husband and I had breakfast together, then we did a few things around the house and talked and then it was time to go back to the hardware store. On our way we went to the specialty beer store because it was almost on the way which was nice. My husband had been going there for ages and I had wanted to see it for myself but never went.

We got some nice beer, including some of what I drank all the time when I was in London in 2017.

And then it was time to brave the hardware store. We got some LEDs and a new lamp for the living room. We bought one that we both found okay, there were none that we really loved. I kept going for lamps pretty similar to what we have in there now, no idea if that shows lack of imagination or just a very particular sense of style.

But the lamp was the easy part, the harder part was finding something to prevent the leak on the balcony. That took us some time. I always get into acute overwhelm in there, with all the music, and the smells and all the people and those huge shelves where you never find what you want and then there are all those small screens advertising some product or other on full blast. Shudder.

But we did get a couple of things that might work, spent another fifteen minutes trying to find wood filler and the right type of glue for what we wanted and while we did find some filler the glue search was a failure.

We came home around the time that we would have wanted to eat lunch and my husband started cooking. While I was using the bathroom the doorbell rang. A man that I first didn’t recognize. It was the guy who had built the new garden gates. The locks on those gates aren’t working anymore so he came to change them.

I was so exhausted by then that I stumbled going up the stairs and almost fell flat on my face. For real. I was lucky to catch myself with my hands and got him the key he wanted.

There was lunch. Rice and dal and fresh cilantro that my husband had grown: 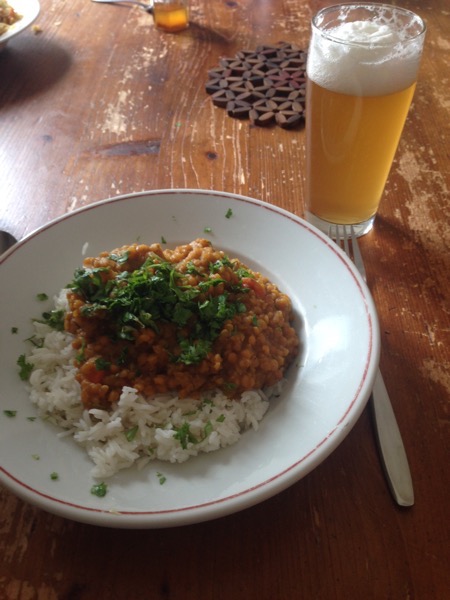 Then I had just enough time to do the dishes until my first student.

I taught my three students, thought the boy would accompany me for grocery shopping but my husband wanted to install the water retention on the balcony and needed help so I went alone.

I even got a new BRITA water filter because our old one had developed the second case of something green growing inside, not the water I’d like to drink. Then I went to a grocery store I don’t like and only got half of what I wanted bought the rest at the health food store, shlepped it all home, unpacked it and put it away, and then I got the new water filter ready for use. And decalcified the kettle, as one does.

The boy and I watched the last two episodes of „The Big Bang Theory“ and finished before the soccer match was on. Poor husband had worked away while we were watching TV.

Then I realized that the bed for our overnight guest wasn’t ready. My husband had put a mattress in my studio and I fetched the bedding my mother-in-law had gotten ready and put some sheets on. Then I did the dinner dishes, finally finished packing and read a bit before turning the lights off.

I am a little miffed that I can’t fit everything I want to take into the daypack, I need to carry the purse as well. I had been hoping to fit the purse into the backpack as well.

And that whole thing is heavy. I’m only a change of underwear and socks, pajamas and one t-shirt besides what I’m wearing but there are the toiletries and the bullet journal and the ebook reader and the iPad with the keyboard and a bottle of water and some almonds and some chocolate and an extra pair of glasses and the knitting project. Lots of stuff.

I will spend most of today on a train to Hamburg. I’ll leave around 9.30 and arrive at 4. There should be lots of time for writing and knitting and reading on the train but experience tells me that I won’t write much. Then I’ll check in to my hotel, get my conference stuff and then I’ll see. I have dinner booked and will have to navigate public transportation on my first night there. But that’s alright.

I’m really excited. Have been looking forward to this trip for more than a year. And I don’t have to work on the balcony while there!