Unfortunately we still need to find a solution for the new balcony floor making all the rainwater cascade over the side which resulted in a halfway rotten main weight bearing beam.

I woke up at six, tried to make myself do something and failed. Had just finished making breakfast when my husband showed up at 7.30.

We were both a little reluctant to don the working clothes again so we only got started at 9.30. By 12 we were finished with coat of paint number two. Then we had to wait for an hour until it was time for lunch, so I started packing some things up that I wanted to send in the mail.

My mother-in-law had been cooking all morning and made us a very nice lamb roast with mashed potatoes and green beans: 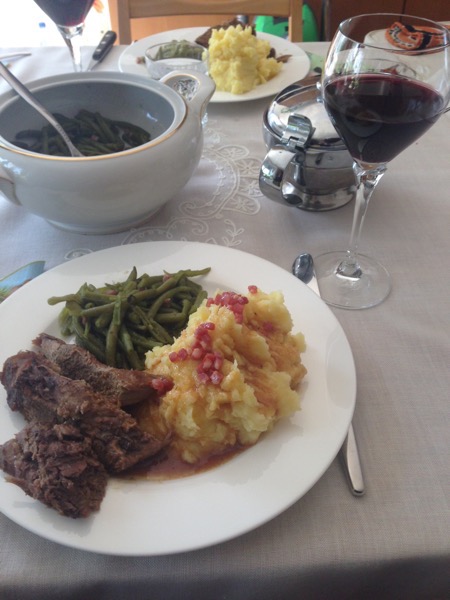 Before hand we had several lengthy discussions about the fact that my husband prefers lactose-free milk and that we’d rather not have any onions in anything, thank you very much, because they contain a lot of fructose.

Everything tasted great, I could have done without the extra bacon topping the mashed potato in addition to the bacon in the green beans but was very grateful that she left off the extra onions on top of the other onions.

Unfortunately the food didn’t sit all that well with me, I am a little suspicious of the sauce. One of the problems with my mother-in-law is that we have the exact same discussion about the exact same menu every year and she never remembers. „What? You don’t want onions? I didn’t know that!“ Also, she makes a lot of fuss to make sure that every component of the meal is piping hot and ‚fresh‘ whatever that means and keeps dashing between the kitchen and the dinner table with the serving dishes, never leaving anything out, not even on the warming platter she had sitting on the side.

After lunch I finished my two packages and mailed them and then it was time to get back to painting again. We were determined to do a third coat of paint on the same day. At one point my husband was even talking about a fourth coat which would have meant going to the hardware store today and painting some more today as well.

We painted the whole thing a third time (well, fourth if you count the primer) and it only took about two hours. And then we were done.

Only, my husband had another look at the hole in the wood where he had excavated some rotten, damp wood that was behaving more like a sponge and the hole is getting deeper and deeper. Which is bad news.

So we are discussing plans to stop the water from going over the side, and of putting a support beam underneath the weak spot and of filling the hole but only after it has been properly treated. Meh.

So. Today is almost a day off, there will be a trip to the hardware store for more supplies, I will be packing and I will be teaching three students.

I might still be a little exhausted, funny that.